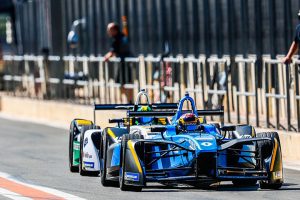 It’s hard to believe that it’s only the fifth year of the ABB Formula E championships, such is its burgeoning global profile in 2018.

Taking place on street circuits of between 2 and 3.4km, the frequently thrilling, FIA-sanctioned, electric-powered car races have been brought to more territories, broadcasters and media platforms with each new season.

The current, 2017-18 season sees 20 drivers representing 10 teams at 12 races (10 events), commencing in Hong Kong last December and due to wrap with two races in New York City in July.

In terms of general public awareness, it is arguable that this is the most important season to date, but that could easily be eclipsed by the 2018-19 run when both BMW and Nissan are due to enter Formula E as participating manufacturers.

Given this phenomenal trajectory, it is perhaps to be expected that Aurora Media Worldwide and North One Television – whose joint venture was awarded the host broadcaster contract in 2017 – have been reviewing the broadcast infrastructure used for Formula E coverage.

Enlisting production partner Aurora Media, they worked with Formula E to scrutinise every part of the production process with a mind to satisfying both current requirements and possible future needs, such as 4K and HDR.

“We have tripled our investment in the TV product with a view to advancing the quality and creativity still further,” he says. “The series has grown and grown, and so has the appetite from broadcasters, to the point that we have as many as 76 broadcasters [carrying Formula E races]. The media product needs to keep pace with the rapid developments in this innovative, world-class sport and event.”

Integral from the start 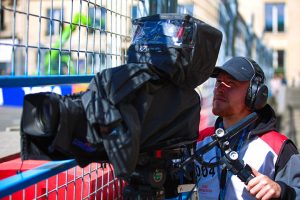 The action is captured with 16 LDX 86 Series cameras

Grass Valley cameras and production technology have been integral to Formula E broadcast production since the very first races in 2014.

As a result, the company was always first choice to provide equipment for the new end-to-end flyaway solution that Formula E and its partners desired. But even bearing that in mind, the extent to which Grass Valley has now permeated every stage of the production is nonetheless impressive; as Russell remarks, “there isn’t a part of our operation that isn’t Grass Valley”.

In specifying the new technology, the teams were acutely aware that, in addition to the obvious need for quality and consistency, the flyaway set-up had to be able to cope with sharply contrasting climates and landscapes.

“The city centre locations are challenging, as are the geographical elements and the fact that we have to work in all kinds of temperatures. We also have to set up and take down very quickly – often a day for each.”

It’s perhaps just as well that, along with an evolving technical capability, the Formula E teams have successfully nurtured an ‘all for one’ mentality.

“There is a real ‘can do’ attitude and we do work as one group,” says Russell. “Of course, we don’t always agree, but everyone works well together, and we achieve great results.”

By all rights, these great results should be even more readily achievable thanks to a new end-to-end offering from Grass Valley, purchased by Formula E’s West Midlands-based facilities provider Hayfisher.

The set-up encompasses cameras, switchers, multiviewers, servers, replay systems and processing frames, and is centred around a Grass Valley NV8500 router that features a 16 RU frame with all crosspoint cards and hybrid options, as well as audio embedding/de-embedding and all video routing.

No room for glitches

Along with the reliability and feature-sets of the new equipment, Grass Valley’s customer support function is also highlighted for praise by Hayfisher director Richard Hay.

“The performance of the broadcast live productions can’t afford any interruptions, including technological glitches or workflow efficiencies,” he says.

“That’s why we chose Grass Valley equipment, because their Global Services offer a full spectrum of professional services and comprehensive customer support, which ensures successful ownership and operation of Grass Valley solutions, whether the races are held in New York, Paris or Mexico City.

“With Grass Valley’s advanced services, preventative support and priority response we feel confident our productions will run leaner and smoother.” 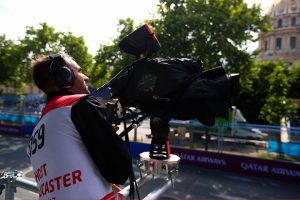 “It can be hard enough at the track to set up in one day, have the day of filming, and then one day to take everything down.”

Four months into the new season, Russell reports that the new flyaway is performing as hoped and is also helping the team to meet its demanding turnarounds.

“It can be hard enough at the track to set up in one day, have the day of filming, and then one day to take everything down,” he remarks.

“It is amazing that we can do that, and it comes from proper planning, the correct choice of equipment, and having the right people involved. And we have all of those in place with Formula E and its broadcast partners.”

Jan Pieter van Welsem, vice-president of sales and marketing EMEA at Grass Valley, says that the company is “so pleased that ABB Formula E continues to benefit from [our] cutting edge and sophisticated line of camera solutions. The confidence that ABB Formula E has shown in our equipment and our quality of service is a testament to the commitment Grass Valley brings to supporting its customers for their live productions.”

Looking to the future, Russell confirms that Formula E is ripe for 4K production as and when it should be required, although “we are not seeing the demand there as yet”.

“[Immersive] would seem to be very much the sound of the future, so it is an area we are working on at present.”

The team is also keeping a close eye on some other developments, such as immersive audio, which Russell expects to have a big impact in the future.

The sound is an important element of the Formula E viewing experience, “so you always need to be thinking about how you can bring that alive in people’s living rooms. [Immersive] would seem to be very much the sound of the future, so it is an area we are working on at present,” he says.