Earlier this year Sky Sports announced that it would make every race of the 2017 Formula One Championship season available in UHD. When the first event, the Australia Grand Prix, took place on Sunday 26 March, it was the culmination of a huge effort spearheaded by Formula One Management that involved the replacement of around 80% of its on-location broadcasting infrastructure during a compressed timescale of 11 months.

With F1 subsequently visiting China, Bahrain, Russia, Spain and Monaco this season – with Montreal the next destination on the schedule on June 11 – the process of refining both the core workflow and the broadcast production is very much ongoing. In the first of a two-part feature, SVG Europe speaks to Formula One Management group manager TV systems Trevor Turner and Sky Sports technical manager Robin Broomfield about this ambitious undertaking, commencing – logically enough! – with the origins of this huge technological transition…

What was the starting point for F1’s transition to UHD?

TURNER: In our mind’s eye we always thought that something like this would come along. For the 2016 season we had already made some inroads into future-proofing our HD production by investing in what was then the current Grass Valley camera, the LDX 86 [licensable for UHD]. But the real catalyst came from Robin and the guys at Sky back in March last year, around the time of the 2016 Australian Grand Prix, when Robin asked us to look at producing our coverage for them in UHD from 2017. So in effect we had about 11 months to really digest that, ascertain what equipment we required, and get everything in place. That’s not to say we took that length of time to actually do the overhaul; most of the equipment leaves FOM’s UK facility in March and does not return – except for maybe a few days for logistical reasons – until early December. Hence the period from NAB 2016 to December 2016 was about technology choice and planning, then from just before Christmas to February 2017 we spent around 10 weeks tearing the heart out of our existing HD system and replacing with the new UHD equipment.

How did you go about assessing what equipment was required?

TURNER: [Renewing and improving workflow] is something that our team is used to doing, although they might not have chosen to do such a major refit [in such a short time] if they had had the choice! But having established that the time was right for UHD, we needed to ascertain how things were progressing in the IP realm. Was it something that we felt confident in and was it something that could be implemented in a ten-week period? Ultimately, we concluded that the best way at that time was to go a fairly standard quad 3G SDI UHD approach.

What was it that really counted against IP? And if you were making the decision now – with publication of SMPTE 2110 imminent – would you have taken a different route? 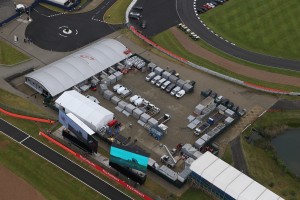 The Formula One compound at Silverstone in 2016.

TURNER: It was really the availability of standards [that covered the whole workflow] at that time and the realisation that light compression would be required to fit into a 10GB connection, which was not something that we were keen on doing. We also felt that it wouldn’t be too long before 25GB and 40GB infrastructures came along and then you could go uncompressed.

Regarding 2110, that’s a good question. I think that a year down the line that things are different and there does now seem to be more coherence in that space. There are some interesting tools out there and a number of the issues we were concerned about – for example, fault-finding in a network that is dynamically changing its routes depending on what capacity is available – [have been addressed].

Having decided to stick with SDI, what were the primary challenges you then faced as you began to chart the move to UHD?

With 24 fibred cameras around the track, pit-lane, heli-cams, RF cameras and on-car cameras, we have about 60 individual sources, which is [a substantial number]. Our philosophy was that we needed to take the infrastructure that we had and replace it with 1080p, and that which we could do UHD we would do as well. So a lot of work was going to have to be done by the vision mixer [that we selected]. After careful consideration we opted for the Snell Advanced Media Kahuna 9600. The Kahuna architecture allows for HD sources to be used in a UHD environment without each HD source consuming 4 physical inputs of the device. Combining the Kahuna with upstream switching meant that we achieved better input flexibility between 720p, 1080p and UHD sources. The Kahuna’s ‘Format Fusion’ functionality afforded even greater flexibility over its competitors. For example, with graphics we have two feeds – UHD and 1080p – and the option to switch between them if there is a problem.

Essentially there are two key mixes: one is the basic track mix, so all the activity from the cameras around the track. The track mix becomes a re-entrant feed into the main desk which has all of the ISO sources, the RF cameras, the heli-cams and pit-cams, specials and so on – all the sources that combine to create the whole programme. With the way that we do things, it is ‘easy’ to produce the track mix using [one of the two] Kahuna Maverik control surfaces to drive the router to return two UHD feeds back into Kahuna – Track Mix transmission and preview.

Our Principal Camera Engineer, Mickey Stratton, came up with another crucial suggestion. Rather than having four times the video flying around our trackside infrastructure, we moved our whole trackside GVG XCU base station system [for 2017 running with native UHD sensor LDX-86n heads] into one location inside our broadcast centre. This is now concentrated into one main 10-rack container, so that’s definitely [a step forward].

The end-result is what you might call a ‘UHD island’ that also manages the 1080p side. We have two SAM Sirius 850 multi-format, expandable routers; one for UHD and one for 1080p, with each acting as an emergency router for the other.

How did your team respond to the many challenges?

TURNER: Brilliantly, and I would like to play particular credit to our UHD project team leader, Elaine Sampson. Elaine is one of our TV systems team leaders and went to NAB in 2016 with myself and our CTO, John Morrison. Elaine subsequently undertook the detailed design and specification work for our new core router and control system and was key in ensuring our existing HD workflows were fully reflected into our new UHD programme chain.

Is the final production solution effectively a flyaway?

Yes – it is a mobile system that is, in effect, a flyaway. We use trucks to move it about in Europe, and we have two broadcast centre structures that can operationally leapfrog over each other.as required. Within either structure we operate a single containerised broadcast production system, which is plug and play. The configuration and layout of the containers [within either structure] is always the same.

Robin, from your point of view what were the main challenges once the new infrastructure was in place and as the first race approached?

BROOMFIELD: One of the most important things for us to was to test all the networks into Sky. That is obviously a moving circus as the operation moves around with the FOM schedules. But we conducted successful tests at the latter events of the last season, and then spent some time with FOM when they were testing their flyaway kit, checking the connectivity and so on.

But of course the real test comes with the first event itself, so we added a few more days for testing and set-up before the Grand Prix in Australia to make sure we had everything right.

In Part 2 – to be published next week – Turner and Broomfield will reflect on the experience of the UHD production on the first five F1 events of the season, the ongoing process of refinement, and the next steps for UHD as a whole.