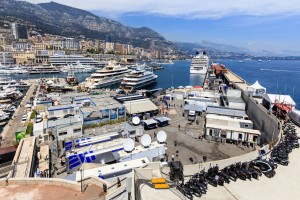 Surveying the route for recent Monaco Grand Prix, which took place on 28 May 2017.

Earlier this year Sky Sports announced that it would make every race of the 2017 Formula One Championship season available in UHD. When the first event, the Australian Grand Prix, took place on Sunday 26 March, it was the culmination of a huge effort spearheaded by Formula One Management and its 40+ team of in-house broadcast engineers, wiring technicians and mechanical & electrical engineers that involved the replacement of around 80% of its on-location broadcasting infrastructure during a compressed timescale of just 11 months.

Following on from a Part One article that examined the challenges involved in the run-up to the UHD transition, Part One focuses on the results achieved to date, as well as some of the other core equipment and the probable next steps for Formula One UHD production. Once again, SVG Europe spoke to Formula One Management group manager TV systems Trevor Turner and Sky Sports technical manager Robin Broomfield…

How did you approach the specification of cameras for the UHD production?

TURNER: We spent a fair amount of time in the early part of 2016 looking for the cameras that were going to be able to deliver what we needed. At NAB [2016] Grass Valley announced the introduction of the LDX 86N Native 4K Camera Series and as we were already running the LDX 86, we acquired some of the first units of the LDX 86N to test. We already had a well-established relationship with Grass Valley and it was straightforward to feedback regarding development and improvements, a process that is always ongoing.

What was the thought-process as you approached the first race, the Australian Grand Prix, on 26 March?

BROOMFIELD: We were working to a very tight timetable and The Sky Team started work on site a day earlier than would normally be the case. They got the encoding (delivery) configuration set up and tested back to Sky in Osterley so that we were at the point where it needed to be. We worked very closely with Trevor and the crew throughout the process of testing the UHD, and to ensure that the HD output – which is ultimately going to far more viewers than the UHD would be – remains intact and is of a consistent quality.

We are very aware that Trevor’s team has to be ready to serve all the other rights’ holders, so the [entire production process] has to be as seamless as possible.

What do you think that UHD adds to the overall viewing experience, and is there scope for further refinement?

TURNER: It has to be an issue of quality. Many people are viewing on larger and larger screens, and I think that Formula One really lends itself to the extra pixels and the additional quality that gives. Some of the results from the high-motion 4K cameras have been really stunning.

Now that we are eight races in [the most recent being the Azerbaijan Grand Prix in Baku on 25 June], I would say that the UHD operation has become as ‘normal’ as it has been in HD over the last five years. In terms of problems we have encountered along the way, controlling the system has proven to be more of a task that we had originally expected. We decided to go with the Axon Cerebrum as our control system as it was more intuitive than some others that are currently available, and we had known the Axon range for a long time. But in some ways it proved to be a challenging one to master, and getting it to work seamlessly [with some other legacy systems] was not quite as straightforward as we expected. Hence now we are in the process of migrating all those legacy systems across to Cerebrum so that everything can be controlled centrally.

We also continue to refine the filming process. Camera operators initially found it tough to focus POV, plus some of our events go quite late in the day and we can start to run into light problems. But I think we were really starting to get on top of these as of the Bahrain Grand Prix [which took place in April].

BROOMFIELD: I think that it has gone very smoothly and we are working in almost the same way as we would have done for HD. The workflows are as consistent from project to project as they can be, and clearly that is advantageous. We have a great inventory of equipment to assist us, for example the Ross Video Carbonite Black production switcher, which is being used to mix the F1 productions in 4K.

You have also become an early adopter of Snell Advanced Media’s LiveTouch replay and highlights system. How is that working out?

TURNER: We made the decision to adopt SAM LiveTouch for the replay system as it allowed us to use both UHD and 1080p across a single platform; that was really one of the big drivers.

Operationally things have gone well due in no small part to input from FOM’s ISO coordinator Tony Ellis and our regular freelance ISO crew; the biggest issues have centred around making sure that they [SAM] understand our workflows. As a standalone system it works perfectly, but when we have got 11 servers running across a network, and we are pulling camera channels through the backbone to different operators, there is a lot going on – and that [can be more problematic]. These initial teething issues were quickly resolved by SAM and FOM’s Livetouch system is now operating well as a stable replay environment.

Finally, how does the new UHD workflow dovetail with the artistic/creative philosophy underpinning Formula One coverage?

TURNER: We cover the events in our own particular way, and have developed an in-house style of directing, producing and content creation that spans more than 20 years. That obviously continues and new technologies such as UHD [take their place over time] in the way that we put the story of each race together.