The COVID-19 pandemic is a global phenomenon that has shut down sports pretty much everywhere. And just as many civil and governmental responses have been mostly local — US efforts have been led largely by state governors, for instance — regional sports broadcasters are wrestling with how to help get sports back on television. Without fans in the stands, audio poses a major challenge.

Fox Sports Australia has been working on the issue as it applies to rugby, first tackling the situation’s most central question: should crowd sounds be inserted into live sports programs? Here, Antony Koveos, head of audio, Fox Sports Australia, relates his staff’s efforts around the issue, readying the network for the recommencement of the National Rugby League (NRL) on May 28, without fans present in the stadiums.

What was the consensus around inserting crowd sound into shows?

“That was the first question, and, early in the week, we all said, ;Yes, let’s run some clean crowd atmosphere through the PA system in the stadium to give it something.’ However, by the time we got to showtime, we all agreed it was going to sound rather silly considering the seats were going to be empty. Fake crowd = hollow emotional connection. 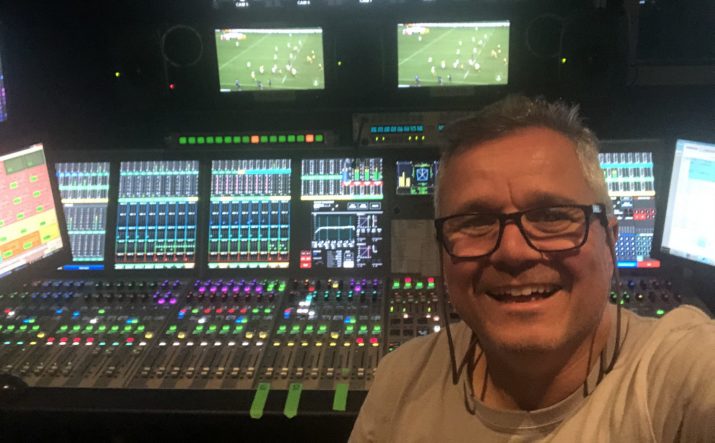 “The first points scored in the first match without a crowd [were] surreal to say the least. The players were pumped having scored, but the deadly silence hit them like a frying pan: there was no roar from the fans! A few hands went up for a high five and quickly limped down, as there was no communal affirmation. That was the moment we all realised how big the vacuum was.”

How do you decide to punctuate the various emotional cues and create an acceptable atmosphere for the viewers at home and the players on the field?

“Fast forward 24 hours, and we had developed a stadium PA-playback policy. We sat down with the stadium PA and playback operators and went through the various states of match day. Every state had a type of music associated with it and played back at a particular level.

“In the pre-match window, we got them to run some low-level ‘bubble’ tracks, pump it up as the teams hit the field, and eventually fade out on kickoff. The music is pumped through the PA, and our effects microphones pick it up as reverberant reflections.

“During match play, the PA fades out, which allows us to extract some decent field-of-play effects, as, for the first time in history, we are not competing with the crowd. When there is a break in play, the PA plays some low-level ‘bubble’ to cover the emptiness, nothing during match play, and, as soon as someone scores from either team, the PA will play upbeat motivational celebratory music at 100%. So the music from the PA becomes the de facto crowd. It works for the players in the stadium; it works for the audience at home.”

How has the broadcast mix changed?

“For starters, the field-of-play effects are fantastic. The stadium has now become like a Foley studio, and you can pick up a lot of good effects, [and] impact sports allow you to hear various levels of contact. Traditionally, we would only hear the big hits; now we can hear the ball touching the hand, minor scuffles, and the stomping of the feet. In ball-kicking sports like soccer, we would hear every kick, which isn’t always possible when fans are chanting and playing drums.

“[We are also] hearing more player communication: all the yelling and calling in back play is easily picked up. However, we have to be mindful of foul language coming off the field of play and the bench. We alerted the sporting bodies heading into this that we would hear this much clearer, and a directive went out to all the teams to be mindful of their language.

“We also made a point to pause the commentary during match play and absorb the sounds as they come off the field, as this [provides] a new insight into the game. We further added our own replay music, and we picked up selected fans at home through video-conferencing apps and recorded their reactions, including audio, and replayed these into the replay sequence. We did get some live applause from the reserve players that sat in the lower parts of the stands. It was like junior-league applause on a Tier 1 sport.”

Any changes with microphone placement?

“The main camera deck is now an unwanted noise source — you can clearly hear the camera operators talking — so the crowd microphones had to move from there. The crowd microphones now become [reflected-sound] microphones: non-specific wide ambience. We find spots for them to pick up reflections of whatever noise there is. In most venues, this ends up being down low, pointing up into the stand and the roof.

“All other microphones stay the same except for interviews. In order to maintain social distancing, we set up an interview position with a shotgun microphone on a microphone stand for the person being interviewed.

“Our reporter has the stick mic, is standing back with the crew, and asks the questions. The interviewee stands 6 ft. in front of the camera and answers down the shotgun microphone. For remote interviews, we run a mix-minus return feed into a powered speaker, such as a Fostex 6301, which allows the studio to talk to the player or coaching staff — no headphone, no earpieces, no touching — and it worked well.

“All other broadcasters, including radio, followed our lead on this, and it’s the new normal. In press conferences, we stipulate that the shotgun microphone is at least arm’s length from the player or coach to avoid their touching it.

“All officials’ microphones are supplied by a third-party company. Traditionally, we would supply one radio microphone, they would supply the other, and we would send each other a split as a backup. However, in the COVID-19 world, we decided to limit our contact with anyone that had close contact to players, so we are hiring a radio microphone from the third-party company who are prepping the kits for the officials. We have no physical contact with anyone involved, we receive the radio microphone on our receivers, we still send backup splits to each other, and an invoice appears in our inbox.”

Any comments from your A1s or A2s?

“Feedback from A1s [includes] less compression required as the dynamic range is less without the crowd: “I found myself backing off the threshold or ratio on quite a few channels.

“Feedback from A2s: “If there is an upside, this is the cleanest the gear has ever been.” Everything is wiped down with alcohol or antibacterial wipes, which was a challenge finding the appropriate cleaning products back in March. From a video perspective, we started shooting tighter and avoided, where possible, showing empty seats.”

Once sports does restart, what will you do differently?

“I think everyone now understands how paramount the health and safety protocols are. It was a little hard in the beginning getting everyone to understand why we needed physical segregation, why we needed to clean everything.

“The month and a half without live stadium sports has given us some time to rethink. How do we inject the viewer at home with the game at the stadium?

“Considering that our transmission delay is around six seconds from venue to the set-top box, live interaction from home into the venue just won’t work. Six seconds is an awfully long slap back if we were to pump home audio into the stadium: someone scores, and, six seconds later, you hear a distorted mess of mobile-phone and tablet audio coming out of the PA.

“That’s not going to work, but we need some home input into the process to give it that communal feel. Everyone is physically isolated, but we are all watching this match together.

“On the audio side, we are currently working with partners looking at ways to capture home-fan audio and curate it into some workable presentable playback — it’s not ‘live’ but is ‘real’ fan audio — and, at this point in time, this may be as close as we get to a communal stadium atmosphere.

“These are interesting times, to say the least. We need to adapt in every facet, we need to think creatively to bring home some enjoyment and fulfillment to our audiences, and we are the conduit to make that happen.”