As the dust settles on a stellar 2018 World Cup in Russia, Fox Sports had a chance to look back at toperations for the massive event at the recent SVG US Sports Content Management & Storage Forum.

Many pieces of the production puzzle were important to make the telecasts of each game a success, but data management was of the utmost importance.

With the tournament taking place thousands of miles from Fox’s broadcast centre in Los Angeles, transmission between L.A. and its onsite operation in Moscow proved a major challenge.

Copious amounts of data were ingested — 29,000 clips, 22,600 assets, nearly 2,000 live feeds, 1,300 show elements, and 1.9 PB of content — from 10 stadiums, 32 sites, and three media locations (postproduction in L.A., studio set in Red Square, and the onsite operation at the IBC). The data needed to be processed efficiently and quickly.

“The Men’s World Cup is the single biggest event in sports,” said Myers. “We had to edit [the footage] and get it back to Russia in minutes for playback in the studio show.”

In addition, producing a sports event on a worldwide stage on foreign soil called for an adjustment period. “We had to learn how to learn differently,” he explained. “We’re used to showing up at a Super Bowl or a World Series and we’re the broadcasters. Now you’re working with a global broadcaster, and that steep learning curve gets steeper in Russia.”

The learning curve helped overcome the obstacle of securing a stable yet protected connection. To ensure that the operation was firing on all cylinders, Hall decided to replicate the current conditions in Russia and practice in the expected environment.

“Security was a big concern for us,” he told attendees. “We had spent over a month prior to this [in our facility] in Charlotte, bringing in generators to emulate Russian power to find out all the kinks and bugs that we were going to trip on.”

Despite the stressful task of developing a method for processing large chunks of data while also seeing a quick turnaround for on-air use, Fox and its chosen vendors established a successful workflow. 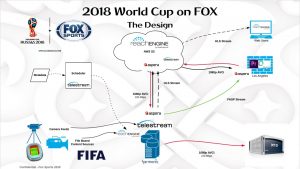 A cloud-based strategy created a seamless transition: going from onsite to in-house editors in the States. “We were able to feed up to six high-resolution, 1080p files directly to storage from Russia to our Telestream encoders in Los Angeles,” said Sobol. “Editors were able to import [various feeds] to their Premiere bays as they were growing.”

With a hard-drive–free workflow, Fox could run an agile and free-roaming system without restraints. Plus, the cloud allowed a minimalist approach to packing the necessary equipment.

“We could also scale it pretty quickly,” added Kaufman. “Just being able to be that flexible and lightweight of a footprint gave us an edge from a deployment standpoint.”

Workspace congestion was limited by relying on a cloud platform as well. “The amount of hardware staff and space we needed for any remote production dramatically decreases,” Hall noted. “We were able to change the workflow on the fly without going, ‘How are we going to get five more servers to Russia in 24 hours?’”

Along with Telestream, AWS and such vendors as Aspera, Levels Beyond’s Reach Engine, and Harmonic alleviated some of the pressure and made the procedure a bit easier. “The vendor support was fantastic,” said Kaufman. “Some of the stuff was done for the first time, and the technology behind it we’ve never done before. The people involved haven’t either. But it ended up working out.”

Future implementation
Looking back on the experience of producing the World Cup for the first time, Fox is eager to deploy this workflow for other projects, including the NFL and college football.

Now that the company has been exposed to a workflow with cloud capabilities, the next step is to make improvements for next year’s FIFA Women’s World Cup in France. “We basically proved that we can edit in L.A. and have an event anywhere in the world,” said Myers. “A lot of this is going to be used again in France, and we’ll find some other things to cook up between now and then.”

Enhancements will be made not only to the intangibles but to physical necessities as well. “We’re looking for ways to even shrink it further,” said Hall. “What happens if we don’t have to ship a container to France and we can just get around with a couple flypacks? It’s kind of mind-blowing to think you could get through a Women’s World Cup with that, but we’re starting to see that it’s feasible.”