“Our spirits are good, and we are ready to kick off the tournament and show everyone back in the States what we’ve been working on,” said Kevin Callahan, director, technical operations, Fox Sports on the opening day. “We’ll have all the things covered, and we’re ready.”

One of the first things viewers will notice is the studio-show set, which is located at the Café de l’Homme. Paris has plenty of iconic views, but it is the sight of the Eiffel Tower that resonates with people around the world, and the view from the Café, part of the Musee de l’Homme, does not disappoint.

“[EVP Graphics,] Gary Hartley and his team designed a magnificent set,” said Callahan. “There was only one rule: don’t mess up the view. The set blends into the museum as much as it can, and the back house of the restaurant has been turned into our operations and production office.”

Callahan notes that the studio has 10 cameras, including a 50-foot SuperTechno50 crane with a Stype kit for augmented-reality graphics that can show sweeping shots of the Palais de Chaillot and the Trocadéro. There is also a beauty camera that uses LiveU’s Matrix IP cloud video-management platform to make it available to Fox TV stations that want to integrate live shots into their newscasts.

“LiveU is the backbone for ENG shoots that are not at a stadium,” said Callahan. “Their new LE600 gear is very reliable, particularly here in France, as it helps us get content to multiple locations simultaneously.” 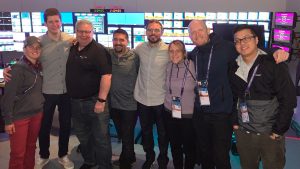 A combined team from Fox Sports, IBM Aspera, Levels Beyond, and Telestream is working together at the IBC for the FIFA Women’s World Cup

There are three shooting locations: the main set, a café set, and a shooting position for the digital team, which is located on the second terrace. From there, the digital and social-media team will produce FIFA Women’s World Cup Now for Twitter every night of the tournament.

“We’ve taken over every square centimetre of space there to maximise efficiency,” said Callahan. “Down the hill is where our technical compound is located. NEP’s Aurora OB truck is there as our control room, and we have 40 Gbps of data leaving that compound: 20 Gbps to Los Angeles and 20 Gbps to the IBC in Paris.”

One interesting note is that the EVS XT-VIA operations, graphics, and playout are done in Los Angeles and the technical director in Paris is cutting to tape machines located in Los Angeles, not in a B unit.

“We basically moved the B unit 6,000 miles away,” noted Callahan.

“We experimented in Russia with our night-time prompter being in Los Angeles,” said Callahan, “and now we are doing it over IP for all of our shows from Paris.”

The Fox facility in Los Angeles also built two rooms for off-tube needs because all audio and video passes through a control room in Los Angeles. The commentary, whether off-tube or onsite, will be matched with a UHD feed that will ultimately be downconverted to 720p for distribution to viewers.

“Last year, we couldn’t do that because Camera 1 of the UHD feed was a different camera and had a different view,” Callahan explained. “So we needed two separate workflows.”

Fox at the IBC

This is the first time that a Women’s World Cup has had a proper building for its International Broadcast Centre (in 2015, the IBC was housed in office trailers). Although Fox has a relatively small footprint of only 300 square metres, it will pack a lot of technical punch. NEP UK, as it did in Russia last year, is providing the equipment and technical support.

“It’s our technical hub for interfacing with the venues and HBS for match coverage,” said Callahan. “It is also the hub for ingest and our archive system that is required for features and is the source for all of the feeds that those in the remote tape room in Los Angeles need.”

There are 60 staffers onsite at the IBC, and Callahan says that FIFA stepped up with a proper IBC. He adds that having all the matches produced in UHD is another improvement over 2015.

“The number of feeds has also increased, and the availability of those feeds has made it significantly 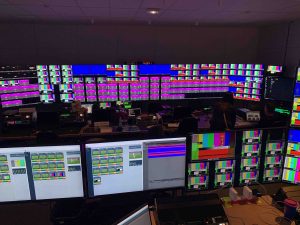 easier for us to have a consistent product from all of the matches,” he said. “The host services are much more aligned with the men’s tournament, like having fully equipped presentation platforms. FIFA has gone out of its way to make TV as important as everything else around the tournament.”

At the core of the IBC facilities is what Fox is calling the Remote Operations Centre (ROC). “We’ve merged all of the technical rooms — like transmission, venue engineering, ingest, and media management — and the assignment desk so that they have the same set of monitors and can talk to each other directly,” explained Callahan. “There is a space saving, but they are also all looking at the same thing on one monitor wall.”

Another key improvement from FIFA is that access to the content on the FIFA MAX servers has been expanded beyond the walls of the IBC. That move makes it easier than ever for the features-production unit in Los Angeles to mine the content for the best clips, interviews, and highlights from FIFA TV. Fox Sports also has two ENG crews traveling around France and sending content to Los Angeles.

“It’s always interesting to see what other broadcasters at the IBC deem important to have onsite,” said Callahan. “We haven’t had real editing onsite for any of the FIFA events.”

Helping to move the content to and from Los Angeles is a combination of equipment from Telestream (Lightspeed Live Capture), IBM Aspera (FASPStream), and Levels Beyond (Reach Engine).

According to IBM Aspera CTO Mike Flathers, FASPStream is at every touchpoint for the transfer of video between Paris, Los Angeles, and the venues. Flathers, who is in Paris with the Fox Sports team, says the big improvement over last year’s World Cup in Russia is auto-archiving.

“In Moscow,” he said, “an event would end, and then all of the camera feeds would be archived to AWS after the match. But here, the matches are auto-archived into AWS S3 while they are going on. That saves a lot of time and work at the backend.”

Flathers adds that there is also enhanced monitoring and better integration of IBM Aspera, Levels Beyond and Telestream technology, enabling a complete view of what actions are occurring. There are four Aspera 1RU servers onsite, and AWS relies on two 10-Gbps pipes to push content into the AWS S3 cloud.

“Everything has gone really well,” Flathers said of the buildout. “We are all sitting next to each other with the Fox Sports team, and everything is working. Last year was the first time this type of workflow was done, and, while we were still figuring it out then, now it is about what else we can do. Hats off to Fox for allowing us to do that instead of resting on our laurels.”

The auto-archiving process begins when the Telestream Lightspeed encoder notifies the auto-archive service in the AWS S3 cloud-based storage that there is content to archive. The IBM Aspera FASPStream technology then transfers raw, live, high-resolution content directly into the AWS S3 cloud object storage as it is being captured. A virus scan ensures that users on the other end will be able to access the content without any risks.

The auto-archiving function shortens the day, Callahan said, adding that the Reach Engine Prelude Panel has been a huge help for the remote ingest team. Immediately after the end of a match, an MP4 proxy version is available within Reach Engine, and Prelude allows that content to be reviewed, logged, imported, selected, and exported.

“The service is directly integrated with Reach Engine so that there are no manual processes,” Flathers pointed out. “Everything is automatic.”

For the editing team in Los Angeles, the improvements to FASPStream mean that the editors will have access to at least four times as many high-bitrate live edit streams, 12 at a time, as they had last year from Russia (this is also due partially to improved bandwidth).

Other improvements include the Unity Intercom, which now has wireless capability, and the CyanView Cy-STEM camera-control system. The Cy-STEM lineup includes the Cy-RCP, a universal remote-control panel that allows any number of cameras or feeds to be controlled from a single unit.

“When incoming feeds hit production, the video operator can have CCU control on cameras that don’t have CCUs so it’s a fantastic system and a huge help,” said Callahan. “We have 12 channels of video in 1RU and can have control over things like black, gamma, and RGB.”

Fox Sports will be onsite at a minimum of 30 matches, and Callahan says the in-venue workflow really hasn’t changed since last year. The Lawo V_remote4 video core plays a key part alongside intercom equipment from Studio Technologies.

“We have a 1-Gbps connection to each venue on match-day-minus-one and match day to bring back [as many as] four video signals and send back [as many as] four return feeds,” he says. “We also have a 128-channel audio core there so that we can mix a local audio feed and also bring in our rules official in real time from Los Angeles.”

The next month will offer plenty of soccer excitement, and, for fans in the US, there are high expectations coming off the 2015 victory. It’s also the first time in four years that the Fox Sports team will have a home team to drive off of emotionally.

“It will really help once we get into the tournament, and, on those days when there is a US win, it will help on those long days,” said Callahan. “We also get energised if there is a huge buzz at home because it gets back to us. It’s always nice to know that the work you’re doing is being seen.”