Crowd sounds are slowly easing back to frame starts and finishes

NASCAR is one of the first major sports to resurface after the COVID-19 pandemic locked down virtually all sports events globally in March. The races are on again, often with as many as three races in a week to make up for lost time. Although the world has changed, much about the races’ sound remains the same.

“It’s pretty much business as usual,” said Kevin McCloskey, A1 for the Fox Sports broadcasts, preparing to set up for the GEICO 500 last weekend in Alabama’s Talladega Superspeedway following a pair of races in Miami the previous weekend. “The configuration of some of the people can vary, but the audio is mostly the same as it has been.” 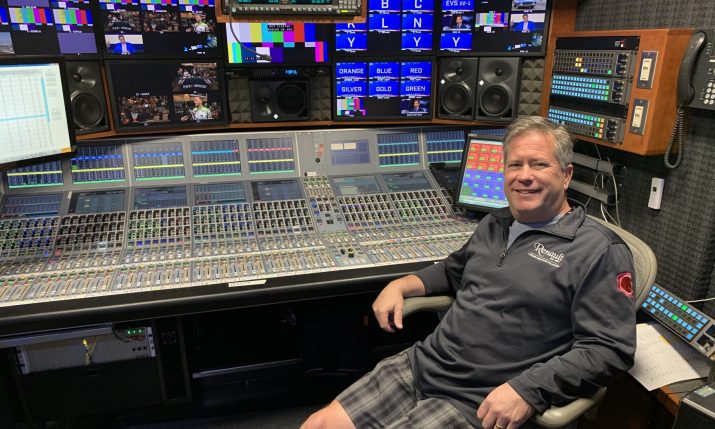 A1 Kevin McCloskey: “Once the race is on, it’s like it always was”

In addition to McCloskey and effects submixer Chip Weaver, the director and one or two pit reporters are onsite, as is the in-car–radio team, working with BSI for wireless to handle the 40 cars on the track. All of that audio goes to McCloskey’s Calrec Apollo console aboard Game Creek’s Cleatus truck. (Game Creek has three trucks onsite; BSI and SMT have one each.) However, the show’s announcers are in NASCAR’s Charlotte, NC, studios, as are the show’s producer and the AD. The graphics and EVS replay operators are in Fox Sports’ Los Angeles studios, although the EVS decks themselves are at the racetrack compound. They’re all connected by an RTS comms system, itself overseen by Andy Roston, working from New York City.

Compounding that deployment of people and assets is the fact that, while the in-car–radio mixers are working from the race compound, editor Jeff Bratta is working from his home, assembling story packages from the radio feeds on a pair of Apple Mac Mini computers. Over an internet connection via Unity Connect, which provides low latency and broadcast-ready quality, the packages will be sent to McCloskey, into the console via MADI, and interspersed during the broadcast.

McCloskey says the setup for each show may reflect some variations on those arrangements, but, once the show begins, it’s almost as though the pandemic never happened.

Almost. The thinness of the crowd is noticeable at the beginning and end of the broadcasts. The Talladega race is expected to have the largest onsite audience yet: 5,000 fans. In Miami the week before, only 1,000 mostly military veterans were allowed in.

“More people in the stands is a welcome addition to the sound,” McCloskey said. “That’s what makes up a large part of the 20 minutes or so before the race starts. For the last few shows, we’ve been using music and some other sounds, such as track ambience, as a setting for the announcers and interviews. It’s good to hear the crowds again.”

The microphone complement, he added, is largely the same as it has been for the past several years, with fewer microphones aimed at the stands but shotgun mics added to increase the range on long robo-cam approach shots, giving the director more loiter time on the shot with audio.

“I sat back and listened to the sound from the last race, and it really does sound the same,” he said, an accomplishment given the extent to which COVID-19 has changed the way broadcasting, like everything else in the world, works. “We have to think a bit more ahead for the setup, but, once the race is on, it’s like it always was.”