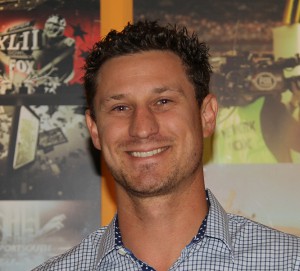 As VP of graphics & technology for Fox Sports, Zac Fields is continually looking out for ways to use technology to increase creativity and efficiency, and tell stories in a unique way. In this extended interview, he discusses some of the key challenges in live sports broadcast and gives his opinion on what makes for good augmented reality.

How did you start out in the graphics industry? Was it something you always wanted to do?

It wasn’t something I initially had my eye on. I basically moved in to a position in remote production as an associate producer and was working in detail with the on-air graphics. So I became very familiar with how the graphics worked and the technologies we used. In 2007, after about seven years as an associate producer, I received a job offer to step up into a management position in the graphics department.

Can you describe your day-to-day role? What are your key objectives? How important is the technology you use?

My focus is all about ‘making it work’ and how we can utilise technology for more creativity and efficiency. So we’re aiming to provide production with as many creative tools as they need to really complement their shows. It’s extremely important we utilise technology as it’s the back-bone of what we do and what I do as well.

What are you working on at the moment?

We’re working on two major projects right now. Firstly, we’ve just built a temporary structure that is serving as our set in Vancouver for the women’s FIFA World Cup. Encompassed in this is sets of monitor graphics, touch screens, augmented reality graphics. In a way it’s a very similar set-up to what our production team has here in our studio, for the month they’re up in Vancouver.

The second project we recently completed was the US Open golf tournament. This was the first time Fox Sports has broadcast golf and there were many graphical components. We implemented the usual insert graphics along with a constant leaderboard (a golf industry first), augmented reality combined with ball tracing, multiple data interfacing touchscreens, new types of cameras and microphones in holes.

How often do you use Ncam and can you provide some example projects? 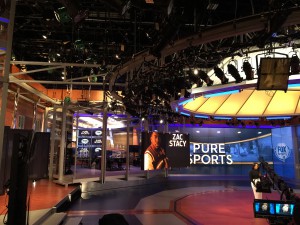 Inside the high-tech environment of the FOX Sports studios

We use Ncam in our studio every single day. We provide production with an augmented reality tool kit and they utilise Ncam for the tracking. We have three units that we utilise – two on jibs and one on a steadicam. There is a whole suite of augmented reality in their shows.

They get used on almost every show that we produce in the studio, such as FOX NFL Sunday, FOX Sports Live and MLB on FOX, to name a few. Ncam enables us to provide a set of tools for these studio shows to tell stories in unique ways.

In recent events we used Ncam in the NFC championship providing high-end graphics along with unique, in-perspective wind graphics. These graphics were also used just a couple of weeks later during our two weeks of broadcasting Daytona Speedweeks.

What are the key challenges of your everyday role?

Technology is constantly changing, so one of the key challenges is just trying to make sure you’re always aware what’s out there and what suits you best for the production you’re trying to achieve.

With broadcast the biggest hurdle with any technology, since it is utilised on-air, it must work 100% of the time and in a live environment. You’re not always afforded the luxury of pre-taping segments or features.

Most or all of the content we broadcast is live. Occasionally we’ll have some pre-taped segments, but the large majority of what we do is live.

What led you to start working with Ncam? How long have you been using the technology?

We started using Ncam in July 2013, in our studio environments here in Los Angeles. We had two studios here at the time, which we equipped with Ncam. That’s when we found out what it could really do.

What originally drew me to them, though, was the very unique approach to camera tracking – something I had never seen before. It afforded a lot of flexibility into the types of cameras that you’d want to encode to do augmented reality. A handheld camera that is able to be tracked in real-time is something that’s quite amazing, and extremely hard to do.

The technology is very cutting edge and the team are a very smart and talented group of people that are constantly innovating their technology and updating it – they are a pleasure to work with.

What benefits does Ncam bring to virtual graphics / augmented reality?

The major benefit for us is the complete flexibility. Because it’s an optical solution, you have the ability to encode any camera you want. We’ve done everything from handheld to jibs to camera cranes.

We only do augmented reality graphics with Vizrt so the ability for Ncam to interface with them was also a benefit for us. In fact, this was actually a requirement when we were searching for a solution.

The set-up is typically quite easy. The longest hurdle you have to face is encoding the lens, but I know that Ncam has recently reduced this process – which is greatly beneficial for us and other broadcasters.

The flexibility of the cameras you can encode and the speed of set-up are definitely the key benefits. There are very few instances where we have come up with an idea that we haven’t been able to execute using Ncam’s tracking technology.

How involved are the Ncam team in terms of support?

As we were the first ones to utilise Ncam for broadcast, they were heavily involved in the initial set-up at Fox, but the support has tapered off over time as per our need. As things are quite stable now there’s very little need for them to be around. However, with future enhancements and improvements that we ask for they are always very active and fast to help us implement changes.

It’s definitely an interesting space, as you have so many broadcasters doing it. Augmented reality is a very effective way to enhance your broadcast – so you see it everywhere.

I think one of the key things that separates the very good augmented reality is the sense of realism you get from certain graphics. The height and realism is something that will only get better and this is where I think we’ll see it move to the next level in the future.

How different is VFX for TV and VFX for film?

The biggest difference for us in broadcast is that it must work in a live environment. You do not have the luxury of stopping down on a bad take – it has to work properly every single time that you utilise your effects. Whether that’s augmented reality, touch screens or your standard insert graphics, they have to run in real-time and they have to run 100% of the time.

What advice would you give someone looking to start a career in virtual graphics?

The biggest thing is taking the time to learn and perfect the 3D aspects that enhance those graphics. So the right amount of lighting, modelling, shading can really make the graphics come to life. An understanding of all of these things would really help someone succeed in this space.

Do you have much time for sport outside of work?

I‘m a huge sports fan – I always have been. I love all LA teams. I’m also an avid golfer – I just wish I could play more!