All six hours of the Supercheap Auto Bathurst 1000 for supercars, the country’s annual touring car event, were broadcast live in 4K UHD from 4-7 October 2018 without any advertising breaks. 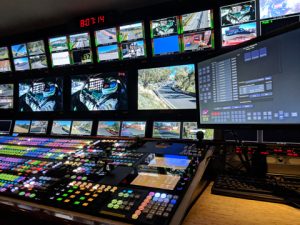 Grass Valley’s solutions formed the heart of the live production infrastructure both at the venue and Fox Sports Australia’s facility, which included a flexible Kahuna 9600 Production Switcher and the highly versatile NVISION Compact Router. Grass Valley was chosen for its proven ability to support the ultra-fast live production turnaround needs and to seamlessly integrate with Foxtel’s own playout workflow, also built around Grass Valley systems.

“Motorsport is all about speed, and with no advertising breaks, everything had to run without a hitch from start to finish,” said Ben Madgwick, manager of broadcast services, Gearhouse Broadcast. “What we needed was an OB infrastructure and workflow that could seamlessly handle the sheer volume of 4K UHD signals, deliver flawless images to viewers at home, and ensure a smooth flow of files between the OB truck, Fox Sports Australia and Foxtel.

“We know from experience that Grass Valley delivers unmatched flexibility and has a proven track record in handling the huge pressures that arise with live productions in fast-paced environments like motor racing. We are very proud to have partnered with Grass Valley once again to help make Australian broadcasting history,” Madgwick continued.

Grass Valley’s solutions were also central to the seamless orchestration and delivery of the race’s live feeds. Signals that were sent to Fox Sports Australia were switched and monitored through a Sirius 800 Series Router with MV-800 Multiviewer before being sent to Foxtel for final switching and transmission.

“Sports fans around the globe demand the best fan experience possible, placing broadcasters and media organisations under pressure to deliver a richer viewing experience from more camera angles, in the highest resolution possible,” said Ward Hansford, vice president of sales, Oceania, Grass Valley.  “As the leader in live sports production, we deliver solutions that can handle even the most challenging production requirements, with no compromise on image quality. It is an honour to see our solutions form the core of another landmark event in broadcasting history.”