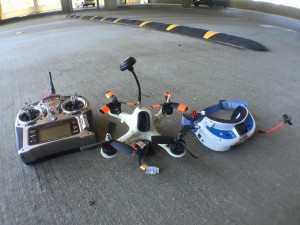 As a sport drone racing is still in its infancy but the combination of video game-style esports action and a millennial fanbase has enticed major broadcasters to invest. The problem is that the video feeds that are currently used to transmit the exciting first person view (FPV) from onboard the remote controlled craft is SD on an analogue frequency — making live broadcast tricky.

Technology to be demoed live at CES in Las Vegas, January 2017 will showcase HD feeds streamed from multiple drones and taken straight to air. Forthcoming broadcast coverage however will be post produced. ESPN, Sky and ProSiebenSat.1 have all recently signed rights deals for the Drone Racing League (DRL) in which contestants race drones through empty malls, stadiums and subway tunnels. Eurosport is also in talks to show drone racing, according to chief executive Peter Hutton, speaking to Reuters.

Under the deals with the broadcasters, 10 hour-long episodes are being prerecorded, featuring six contestants and giving viewers a video feed from the cockpit.

“Drone races will be the Formula One of the future,” said Zeljko Karajica, who heads ProSiebenSat.1’s sports business 7Sports, in a statement. “It’s the perfect combination of physical racing, eSports and virtual reality.”

While aerial photography UAVs are designed to hover in place and carry a camera with a gimbal and GPS-assisted flight, racing drones are small, typically 250mm in size, and have front mounted cameras, usually configured in an H-style shape. These cameras operate in the analogue video transmission frequency 5.8Ghz with a resolution of 480-600 TVL lines. This signal returns to the base station or receiving device which feeds the goggles worn by pilots to see and control the drone in flight. The same feeds could be used for mixing into the broadcast or web stream — but will be SD. Boost the data and the latency can drop — and that’s lethal for drone racing.

“Even a delay of a couple of seconds is enough for piloting to become near impossible with crashes bound to happen,” says Marque Cornblatt, founder and CEO at Aerial Sports League (ASL). “The downside is that the signal is not pretty. It’s good enough to fly by but not to broadcast.”

Where ASL races have streamed live on the web the SD feeds are used in a quarter or third of the screen with graphics and statistics filling up the rest of the real estate. A further hazard is signal interference such as reflections of the signal off walls and metal (especially if flying indoors) and multi-pathing caused by conflicting signals from neighbouring drones.

Since, in many competitions to date, it is the pilot themselves who DIY the drones, including integrating the FPV cameras, one pilot’s set-up can inadvertently interfere with the signal of a competitor. There are no standards yet in this nascent sport.

Race ready with less breakup and no multi-pathing

However, drone racing producer FPV Live is on the cusp of introducing a digital HD technology “which will revolutionise our ability to broadcast live,” claims Todd Wahl, Co-Founder and Business Development. It is working with Israeli-based wireless links developer Amimon which has adapted the technology used in its Connex lightweight receiver/transmitter specifically for drone racing.

ProSight, released in June, includes a 720P HD camera, plus the transmitter and receiver. FPV Live has tested the unit on board eight competitor drones flying simultaneously at the MultiGP Championships in Muncie, Indiana in September.

“We’ve proved we can be race ready with little to no delay at a higher definition with less breakup and no multi-pathing,” says Chris Toombs, founder and technology manager at FTV Live. “It’s not exactly HD, it’s lower than 720p so we call it high quality rather than HD, but it’s certainly a better image than analogue.”

FPV Live and Amimon plan on providing a live demo of a drone race streamed in HD at CES2017. Despite the challenges of maintaining a digital signal in FPV drone racing — like rapid maneuvering, obstacles and low flight, Amimon says ProSight provides zero-latency, HD streams.

“In digital you can have a really tight frequency position because of the encoding,” explains Toombs. “Each pilot’s goggles are plugged into the base station receiver and bound directly to a signal that can only be transmitted from that pilot’s drone.”

Aside from wireless issues, it’s also tricky covering such a fast paced sport where tiny drones are zipping around at 80-140MPH. “You would need professional camera-operators trained in drone racing to be able to track a drone in flight and directors also versed in drone racing to understand when to switch between wider coverage and first person views,” says Cornblatt.

He doesn’t believe drone racing is yet ready for broadcast primetime. “The real experience is more akin to watching or playing a video game but the current drone racing viewing formats are built around old school models like NASCAR and Formula 1. There’s no harm to that but I think the format needs to evolve and take cues from esports and video gaming culture.”

In particular, Cornblatt thinks that when AR and VR mature these technologies will converge with drone racing. “We’re doing some engineering projects to converge the worlds of gaming and drone racing,” reveals Cornblatt. “Being able to user-select a FVP camera angle and pilot for example seems like a natural to me.

“I definitely see ways we can bring the audience into drone racing and making them part of the experience. This could be as simple as using social media voting for a favourite pilot to give their drone a power boost, but we are also looking at other ways to involve an online audience. For example, can pro-pilots or even fans at home control a drone when they are not present at an event? Flying via the web yet racing in real space is a distinct possibility [widespread in the military] for incredible user interaction.”

Shortcut to serotonin and dopamine system

“Drone racing is wildly popular among pilots, but the viewing audience has been slower to develop, primarily because the DIY underground culture of drone racing has not produced any events with the needs of an audience in mind,” says Cornblatt. “Aside from a few Youtube videos, few have experienced the thrill of a pilot strapping on FPV video goggles and experiencing an athlete’s out-of-body ‘flow state’”.

He describes this as “a shortcut” to the brain’s serotonin and dopamine system, which “acts as a drug for pilots who quickly become ‘addicted’ to the FPV flying experience.”

“This is great for the pilots,” he adds, but does nothing for the spectators, who are left watching tiny machines flying off in the distance – not particularly thrilling. “A real challenge is to create an event that will serve the live audience as well as those watching online.”

One way the ASL does this is to make the live event ‘theatrical’ by for instance having gates light up as drones pass through them; to project a mixed feed onto large screens on-site; and to install viewing stations with goggles at the event for fans to view the cockpit FPV.

“If you look at esports as a model then the audience online is growing well past 100 million (globally for 2015) but you can’t disregard the enormous popularity of the live esports event where audience numbers rival that of a Super Bowl. The same is happening in drone racing.”

More edgy and off the cuff than ESPN

FVP Live produces events such as Mega Drone X held underground at the Louisville Mega Caverns. Its broadcast setup features low cost prosumer cameras like the Canon G20 and small network based HD cams placed on gates or on a commentary position (usually featuring Joe Scully, race director at FPV Racing Events) and “the voice of FPV racing” according to Wahl.

FPV Live simulcasts to YouTube, the host organisation website and its own site, and is working to deliver feeds to Periscope and Facebook Live. It sees its audience as millennial. “These fans are are interested in this raw behind-the-scenes action rather than the slick and polished world of traditional broadcast. We are a little more edgy and off the cuff [than a ESPN],” says Wahl.

He elaborates, “Although we have a production sheet [schedule] we interact with our audience with live chat and have them influence the live production. They can ask questions of pilots or request different camera angles. Education is the biggest hurdle. Commentary and colour helps but we want to make fans based on information so we interview drone manufacturers about the technology. We want to make them feel they have the power to interact with us.”