France Télévisions and A.S.O. prepare for the 2016 Dakar Rally 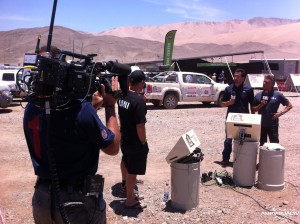 An extensive broadcast production infrastructure will be deployed for the next edition of the Dakar Rally Raid, which will take place in South America between 2 and 16 January 2016. The legendary endurance race will take place primarily in Bolivia and Argentina, and will be the subject of comprehensive broadcast coverage on a daily basis.

Patrick Genin, production manager at Dakar Rally organiser A.S.O. (Amaury Sport Organisation), comments: “One of our major challenges is having to supply footage in time for the 8pm news broadcasts in France considering that the race is not even finished for many of the competitors. Because of the five-hour time difference, news cuts need to be ready and sent off by 4pm local time.”

France Télévisions, which is the principal broadcaster of the event, will air a special programme every evening at 18.40 on France 4, followed by a short highlights programme for the Dakar newscast on France 3 at 20.05. In the third section of the evening, on France 2, the former Dakar Rally champion Luc Alphand will present the highlights of the day on the Bivouac programme. This will allow viewers to relive the key events and follow the night-time arrivals of amateur competitors. There will then be a rerun of the programme every morning on France Ô.

Broadcast rights are jointly held by Eurosport until 2020. In total, 70 channels broadcast the Rally Raid internationally, 20 of which bring their own crews to the site.

“All our technical equipment is transported by road from one bivouac (rolling base camp/pit area) to the next. In all, we use three helicopters equipped with Cineflex cameras. Halfway through the race a first satellite station is used and then another one at the finish of the special stage. A third one receives the signals from the bivouac, which is often as far as 200 kilometres away,” says Genin.

As was the case when the race was held in Africa, a local subsidiary of Globecast will manage the five satellite relay systems. Numerous live link-ups take place throughout the day: for example, one with a journalist in the helicopter, a second at the finish line of the special programme, and a further one inside the bivouac where most of the live broadcasts take place.

The feed for France Télévisions and its programmes will be transmitted from an OB truck supplied by AMP Visual TV. This unit will also receive the satellite signals and wireless transmissions from the cameras. Meanwhile, a smaller vehicle will house the hub for the international feeds.

“Each day we dismantle the TV broadcast compound and reinstall it the following day in the next bivouac situated quite a long distance away,” says Genin.

For the various other TV stations present another truck contains the editing facilities, comprising 23 Avid workstations and an ISIS server.

Camera-wise, the A.S.O. crews continue to use Sony HD XDCAMs, having decided to deploy them some years ago.

“This choice was largely based on the recording medium used as the Sony discs are cheaper than the cards used by other manufacturers and are more user-friendly. A large stock can be kept onboard the helicopter and ground vehicles, which facilitates editing and post-production. We use about 1,200 discs for every Dakar Rally and we replace about 500 units each year,” concludes Genin.