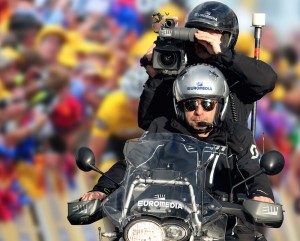 Following an open call for tender, France Télévisions has renewed its relationship with Euro Media, who will provide RF technology to cover cycling races broadcast by the group during 2016-2020.

For the next five years, Euro Media will therefore continue to draw upon its technical and human resources in order to provide France Télévisions with the necessary RF means to cover some of the largest cycling events in the world, such as the Tour de France, the Paris-Nice, Critérium du Dauphiné, Paris-Roubaix and Paris-Tours cycling races.

Euro Media will provide France Télévisions with: a team of permanent staff with extensive expertise in RF; a series of tools and facilities specifically geared towards cycling productions; and an R&D unit to develop more cutting-edge equipment.

Jean-Maurice Ooghe, production director of the Tour de France for France Télévisions, commented: “Congratulations to the RF crews of Euro Media. For many years I have appreciated their deep knowledge and expertise. Filming the Tour is always such a challenge. Innovation is the key. The next five years are going to be very exciting!”

Lionel Vialaneix, chairman of Euro Media, added: “Together with France Télévisions and ASO we have continued to develop and enrich the coverage of cycling races in general and the Tour de France in particular. The broadcasting quality for the Tour sets an example worldwide. True to the goals we fixed together, the next five years of the renewed collaboration with France Télévisions consolidate our technical leadership and expertise, and mean we will continue working together in terms of research and development for the future coverage of cycling races on television as well as other screens.”