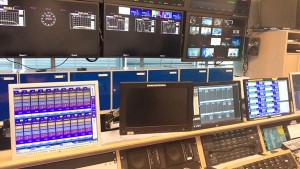 In addition, France Télévisions was one of the co-founders of the Euronews channel. It has been one of the reference European users of the AEQ TH02 Digital Telephone hybrids at TV central control and since its technical renovation and operational modernisation in 2005. France Televisions now has an installation of two AEQ SYSTEL-6000 talk-show systems at its headquarters.

This system allows France Télévisions working simultaneously with more than 40 VoIP or ISDN calls or communications providing simultaneous service for several production studios. The AEQ Systel 6000 is used to receive all the calls that come from outside the control. Principally coordination calls, but they can be also to go out on the air.

In 2016, and in order to comply with and adapt to a new technical and operational expansion of their central studios, AEQ’s technology for talk-show systems has again been the preferred choice by France Televisión’s technical managers.

Technology for telecommunications infrastructures has made notable progress during the last few years, and on this occasion the talk-show system selected was the AEQ SYSTEL IP based on SIP technology. Two complete platforms have been supplied as well as a limited number of gateways allowing the broadcaster to operate the system in combination with their SIP based PBX for VoIP calls and for calls originating form PSTN (analogue) and ISDN lines.

From now they use gateways but when they migrate they switchboard to IP, it will be possible do the connections without the gateways. Systel IP can be configured in automatic response, with a tail by each line. The operative is simplified to adapt to the simple management of communications that gives them the Systel 6000 system.

SYSTEL IP is a broadcast calls and talk-shows system, which reduces communications costs, improves the audio quality and increases the flexibility and the integration with existing telephone systems. SYSTEL IP allows connecting broadcast telephony to the standard company PBX based on SIP, avoiding having to use conventional exclusive lines for broadcast.