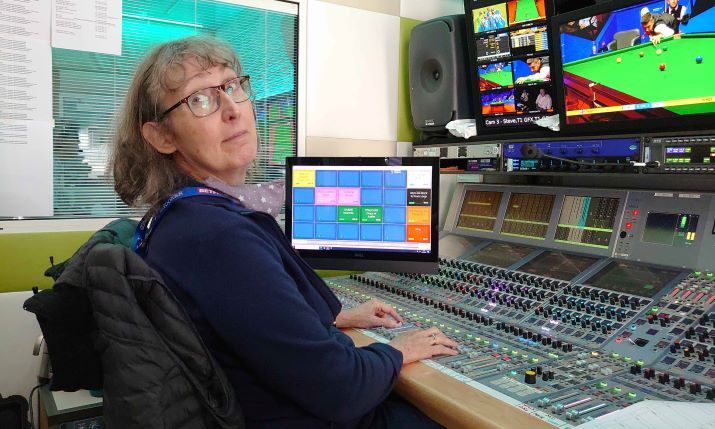 We caught up with UK-based Louise Willcox, freelance sound supervisor at DWR Associates, a business aimed at solving audio and communications problems for the broadcast and business world run by Willcox and her husband. We spoke about the ins and outs of her career, which has taken her from mixing live sports coverage to the BBC’s Autumnwatch, part of the annual BBC series known as The Watches.

What are some key projects you’ve done with outside broadcast firms companies?

It’s true that I’ve been fortunate enough to work with some great companies, many of which are OB companies who’ve employed me for sporting fixtures such as football, hockey, rugby, motor racing and horse racing.

For NEP in 2021 I was one of three sound supervisors for Wimbledon, where all of the consoles I used were Calrec consoles and were all connected to a private network. The network administrators set up protocols giving consoles access to their areas only. I used Calrec Summa consoles for the outside courts and Apollos and an Alpha for the show courts.

“When I’m responsible for planning the whole job, I research the most efficient mode of delivery for audio signals.  I take advice, I offer up alternatives to the planning engineering manager – who manages budget – and then agree with the them what kit I will use”

Trace courts were ‘spot monitored’ during the day. The ‘Show’ Courts are Centre, Court 1 and Court 2. I scheduled the same relief sound supervisor to a show court for the duration of the competition, where, for outside courts, all three worked in all areas.

Centre and Court 1 consoles were Apollos, and Court 2 employed an Alpha console. The basic coverage was the same as it was for the outside courts with the addition of a larger court mic and crowd FX rig; more track sends to EVS record area, on-court interviews after each match (more auxiliaries for IFBs, and feeds between the broadcast console and PA), and many more EVS replay channels. Two of Calrec’s Artemis consoles came in very handy for the Wimbledon Channel and World feeds.

The Summa console is excellent; the delay resources were powerful enough to match the considerable latency of Trace court pictures. Things like cloning and VCA functions allowed users to create bespoke layers, leaving pro-forma layers untouched. The touchscreen on the Summa is easy to understand and quick to learn to operate. Fader and upstand labelling, as well as upstand metering, made interpreting the different desks easy; some court facilities varied a little.

Dock10 also hired me to be part of the team that covered (what I call) the ‘virtual Tokyo Olympic Games’ for BBC Sport. All of the commentary was done in Salford; only post-event in-vision interviews at venues were live from Tokyo. I was relief mixer available to cover HQ3’s (Harbour Quay)  live coverage and presentation from their virtual green screen studio. I was actually based in HQ 4, submixing commentary, and voice-over recordings, as well as available to trouble-shoot anything for the team.

HQ2 and HQ3 had 56-fader Apollo consoles, each with – split working – Grams extension of another 16 faders. Above all, the Apollo’s auto-mixer function was invaluable; with COVID social distancing in place, it managed the increased delayed ‘spill’ faster than I could!

The industry is moving towards IP-based solutions for audio control, networking and distribution. What is your experience with these changes and how are you experimenting and working with IP?

I have mixed live coverage of various football matches for Gravity Media, sitting in a little office in Manchester with feeds routed to a desk remotely by a team in London. The commentators were in a room next door; their signals were sent to London then routed back to me, next door. (I had a feed straight off their commentator units just in case.) The signals coming from the Olympic Games in Tokyo to Media City were via IP.

“There are a lot more women working in professional audio now, many working in the northwest, Media City in particular, I’ve noticed.  More of them have children, with child rearing more equally shared with their partners, and/or with a lot of help from parents. There is hope!”

I helped the Institute of Production Sound set up an audio over IP (AoIP) training weekend, and have copious notes in my Idiots Guide folder on my PC!  However, and to be frank, when I’m employed as a ‘white gloves’ sound supervisor, I plan what sources I want on the desk, and a guarantee engineer (wherever they may be based) route those sources to the desk for me to manipulate. They can be analogue, MADI or AES, and may originate from a myriad of sources.

When I’m responsible for planning the whole job, I research the most efficient mode of delivery for audio signals.  I take advice, I offer up alternatives to the planning engineering manager – who manages budget – and then agree with the them what kit I will use. I become an expert in a particular type of kit for the duration of a job, make copious notes, then mentally discard the information until the next time I’m a ‘planning’ sound supervisor.  Technology is moving so fast I cannot be wedded to any particular technology or manufacturer.

Women make up less than 10% of audio engineers and producers, according to reports by the Audio Engineering Society. Why do you think this is the case? Are you able to share your experiences as a woman working in this field?

I had three brothers, no sisters, and my father was killed in an accident when I was 12. This probably meant that, inadvertently, I was on a more level playing field at home than many girls in the 1970s.

There are a lot more women working in professional audio now, many working in the northwest, Media City in particular, I’ve noticed.  More of them have children, with child rearing more equally shared with their partners, and/or with a lot of help from parents. There is hope!

Tell us about your background in professional audio and how you were drawn to the world of broadcast audio.

Growing up I watched TV and listened to a lot of radio, but I was a nervous performer and instead helped balance my brother’s band. When I was 13, I saw a documentary about Abbey Road Studios and that’s when I decided working in broadcast audio was what I wanted to do, preferably for the BBC.

After some bad career advice, seeking the wrong qualifications – and a ‘what am I going to do now?’ secretarial course – I got a secretarial job at the BBC in Manchester. One of the managers encouraged me to apply for the BBC Audio Unit Register. I failed the first time, but after a six-month spell at night school I succeeded the second time around.

I was just 20 years old and couldn’t believe I’d ‘made it’!  The downside was that I had to move to Pebble Mill in Birmingham. But on the upside, I was doing the best audio apprenticeship at the BBC: live TV and radio; recorded TV and radio; TV and radio outside broadcasts; post production dubbing. You name it, we covered it.

From there, I became a senior audio supervisor in 1990, was made redundant in 2006, and now work freelance through the DWR Associates Partnership (with my partner and husband), which supplies audio and comms services to the broadcast industry. Almost all the shows I work on are ultimately for the BBC.

You’ve worked as a sound supervisor for the BBC’s Watches since 2003. Tell us about your experience on those programmes. What was it like winning a BAFTA award?

The Watches have become a household name, and the BBC website features our wildlife all year round, live when we’re on air. It began in 2003, when I was requested to mix a show called Wild in Your Garden, in Bristol. This series spawned the Bill Oddie Goes Wild three week series from a farm in Devon in 2004, which in 2005 was renamed Springwatch.

Live broadcasting was a complete anathema to the BBC Natural History Unit. Its comfort zone was five year long projects; a camera mic recording guide of exotic locations and wildlife, then a dubbing editor replacing the audio in a two year post production process. Sound was an afterthought, and the use of live audio almost unheard of (if you’ll excuse the pun!)

For the series in Devon, I persuaded the production team that if you can see it live, we must hear it live. Lavaliere mics were rigged with each camera inside the bird boxes, with shot gun mics (usually MKH 416s) for other habitats (badger setts, nests in hedgerows etc,) and the rest, as they say, is history. The production team soon realised the sound – and not just the appearance of wildlife – contributed to their stories and sometimes became the story.

I had up to four pairs in different locations to give me a choice of background soundscapes. All mics stayed outside for the duration of the series; nearly four weeks (including the rig) for Springwatch. Mics are moved as wildlife fledges or dies, and it’s the keeping track of that movement that can be challenging.

We still have ‘story developers’ watching our cameras day and night, recording interesting behaviour for use on the following day’s programme. It was our second Springwatch exec producer, Tim Scoones, who in 2006 realised that these feeds could be streamed on the newly developing BBC website.

So, we started streaming 20 hours a day to four BBC web streams and it became very popular. Some of our wildlife even made newspaper headlines.

Around 2012, presenter Marin Hughes-Games (previously an NHU producer) created Unsprung. Initially broadcast on the BBC Red Button immediately after the BBC Two transmission, it was quite anarchic where wildlife and handlers were brought into the ‘studio’, and other guests, often celebrities, who had an interest in wildlife. After a couple of years, the show moved to BBC Two.

Our rig now included not just the network of fibres and audio encoders to transport wildlife audio and radio mics from around often vast sites, but also a PA rig, audience mics, booms for questions, and a music rig in whatever we were using as a studio.

The 2010 Special Craft BAFTA, awarded in March 2011, was shared by the whole craft team who facilitated the (then) unique, groundbreaking wildlife web streaming, and multi-platform coverage of the Watches.

From there, I went on to work for Autumnwatch 2011, which took me to some fantastic locations and in October 2018, Autumnwatch went to New England for a co-production with an American company. I was chuffed to be told by the US sound team that it was, “the best planned television programme they had ever worked on”.

During the 2020 lockdown, the format of Springwatch changed to mixing three remote locations at Timeline’s base in Ealing. I was asked to mix the show, but my (adult) kids said they didn’t want me to work in London at the height of the pandemic. Because of this, it was beautifully mixed by Max Dighton, who was nominated for a BAFTA for his efforts.

I mixed Autumnwatch 2020, and all three 2021’s Watches from an OB truck in BBC Bristol’s carpark, the latest with remotes coming in from Norfolk, Isle of Mull and Castle Espie in Northern Ireland. LiveU was the method of delivery from Mull and Castle Espie single cameras; however, we used IP delivery for the three Norfolk cameras with satellite backup circuits (the engineering manager hopes to increase fibre infrastructure from the location next year to remove the need for satellite redundancy).