French Open: after two years of 4K trials, will it be all systems go in 2015? 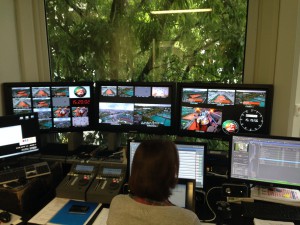 For the first time this year, FTV is making use of the IPDirector scheduling function

Concluding yesterday (4 June), Sony F55 cameras captured well over ten hours of footage across two days of play at this year’s French Open. Following a replay-only 4K demo at last year’s event, the 2014 incarnation has delivered live streaming to a public demo on the Roland Garros site and, via national DTT service TNT, to compatible 4K TVs in Paris.

The relatively straightforward workflow for the demo entailed action from four matches being captured by a quartet of Sony F55s and ingested into a solitary EVS XT3 server – in contrast to the two required for last year’s demo. “The interesting aspect here is that we can now manage two inputs and one output with one XT3; last year we were working 1:1,” said Eric Karcher, sales manager France at EVS.

Apart from the server, EVS also provided support to the technical teams from Euromedia and AMP Visual, who were enlisted to oversee the demo at the behest of tournament organiser the French Tennis Federation. “The goal, as far as I understand it, is for the Federation to both show beautiful pictures of crucial tournament action and gain a clearer understanding of what the future of broadcasting is likely to be. From the perspective of [host broadcaster] France Télévisions, it is an opportunity to test 4K for DTT and satellite transmissions,” said Karcher.

In fact, the path for the 4K trial content once it left the truck actually split into three: an IP stream for which new French start-up BBright encoded at a reduced frame rate of 25 fps per second (as opposed to the 50 fps otherwise in use) with a bit-rate of 15 Mbit/s; a satellite feed encoded by Ateme with a bit-rate of more than 30 Mbit/s; and, in what is claimed to be the world’s first DTT video transmission in 4K using H.265 compression, a DVB-T2 transmission broadcast by TDF to national DTT service TNT, and encoded using Envivio Muse Ultra HD software on Envivio G5 appliances (bit-rate 22.5 Mbit/s).

Laurent Appercel, senior marketing manager at BBright, highlighted the evolution witnessed between the 2013 and 2014 trials: “Last year the demo was replay only; they were shooting during the day, encoding at night then replaying the next day. This year it is real live coverage from seven cameras over two days.” Regrettably, there wasn’t much action to be seen at the time of SVG Europe’s visit as torrential rain stopped play for several hours… although the raindrops and orange court covers certainly looked pretty damned sharp!

The results of the trial will be assessed over the weeks and months ahead, but the question in the compound was whether 2015 might witness the full transition to daily live 4K broadcasting. Despite quoting a recent statistic published in Business Insider that predicts total sales of 4K TVs could top 15 million this year, Appercel thinks that we are on “a ten-year cycle of renewal after HD became widespread in 2007, so I think we could be looking at 2016 or 2017.” Karcher, however, is more optimistic: “My sense is that full 4K live production in 2015 could act as a decent warm-up for the Euro 2016 championships here in France. Obviously, you can see the logic [of a 2015 roll-out].” 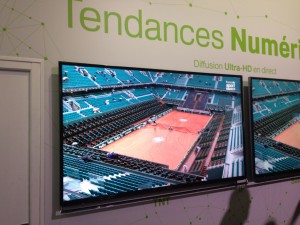 Rain stopped play: SVG Europe’s visit to the 4K public demo didn’t quite take place at the most opportune moment…

Meanwhile, for EVS, the goal will be to increase 4K channel capacity – “today we are at three, I hope we will have four next year” – and to ensure that the user experience remains essentially unaltered. “For the logging operative, for every stage we want the experience to remain the same. That means the objective is to be as transparent as possible for the exploitation of the content,” said Karcher.

The philosophy will also apply to 8K, if and when it should become a realistic proposition. “It’s some years off, but we are very interested in 8K and it was clearly the subject of much conversation at NAB,” said Karcher. “Of course, even more with 8K than 4K, there will be a need for really powerful hardware and bandwidth; it’s not easy to obtain that kind of performance! XT3 is currently the server with the biggest bandwidth available, around 4 Gbit/s, but for 8K that would not be enough. So I suspect the reality is that a new generation of equipment would be required. We shall see…”