From entertainment to sport: ITV Sport’s Emma Goldberg on transferable skills in a growing business

ITV Sport’s Emma Goldberg has made the move from live television events such as The Voice UK to sport, thanks to an extensive understanding of what it means to work in a live environment. Goldberg is the new production executive at ITV Sport, working to support Ben Russell, head of production operations. 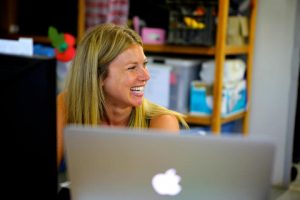 ITV Sport has recently undergone a move away from its home at London Studios for all its post production and studio requirements; Goldberg will provide support to the production management team as they transition into a more commercial environment, working with more external facilities as well as supporting production management around live events on a weekly basis, such as horse racing, and major tournaments the 2019 Rugby World Cup in Japan and Euro 2020 across Europe.

Making changes for an efficient future

The introduction of the production executive role at ITV Sport is designed to make the department’s production team efficient, effective, and make it more flexible to the needs of today’s sports broadcasting industry, in particular with ITV Sports move away from London Studios into the commercial world.

Goldberg comments: “There have been a lot of changes going on for ITV Sport over the last year. We are building a team who feel empowered to manage any production we have in the commercial world and have the level of support that the production managers need in order to have an overview of a production. With more support from my new role, production managers will have the time to cost report effectively and enable more efficiency and most importantly, more creativity; as a production team we are there to ensure we put the money on screen.”

Even though Goldberg’s new role did not officially take effect until September 2018, she started carrying out her duties as production executive some time before, including working closely with the production managers, rolling out new initiatives and keeping on top of existing ones, reviewing internal processes at ITV Sport, and forward planning.

“Ben’s role encompasses so much, but he needed a level of support in the form of a production executive for the production managers. I don’t micro manage, I just provide that extra support they need, plus help make decisions faster, for everyone’s benefit,” she says.

Formerly Goldberg was a unit manager for ITV Sport, where since November 2016 she worked across change management, moving ITV Sport into new offices on Gray’s Inn Road, London, in January this year, and working with new external facilities. She has also been introducing new systems and company initiatives such as BAFTA’s sustainability carbon calculator initiative, Albert.

Goldberg says the move out of the Southbank to the new offices was a huge change for this department. “We moved here [to Gray’s Inn Road] in January, all into one big space where everyone can easily talk to one another and collaborate.

“We’re making sure we’re connected to [the whole of ITV] and vice versa. We can share production management talent, and have done; people go from I’m a Celebrity to ITV Sport on the likes of the FIFA World Cup and the upcoming Rugby World Cup. The skills are very transferrable.”

She notes that while many people that work in sports production are avid fans of one sport or another, not all have the same background: “A lot of people that work in sport have a real passion for it; it’s what they want to do. However, not everyone started out in sport. I myself have come from an entertainment background, but the pressures of working in live production are similar across the board.”

Goldberg has worked across an array of areas, from VE Day 70: A Party to Remember with a 21 camera OB at Horse Guards Parade and St James’ Park in London with BBC Events for BBC1, to working as production manager for The Invictus Games with 14 hours of live output across BBC1, BBC2 plus a one hour documentary, and The Voice UK, where she worked as production manager for Wall to Wall for the BBC. As well as many other shows across the entertainment board, she has also been production manager on Im a Celebrity Get Me Out of Here… Now! with ITV Studios for ITV2, as well as several Dancing on Ice series’ with ITV Studios for ITV.

Originally, Goldberg moved across from the BBC to ITV Sport to work as a unit manager across change management and the move out of the Southbank.  Then the production executive role was advertised and she felt that was a role that would not only challenge her, but could also be achieved with a work-life balance. She says: “The biggest challenge for any working mum is striking a balance between doing a great job at both home and work; I’m lucky ITV support me in achieving that and I hope to be able to draw on my live event experience to make this role a huge success. I am taking the lead on the 2019 Japan Rugby World Cup.

“I hope people will notice a difference in what I am and will be doing here,” she concludes. “I will help people to do their jobs and develop. I’ll be learning from them, and hopefully they will learn from me, and we can work together to shape the vision of ITV Sport. The skills we have here mean we should be able to put on any live event seamlessly. Live events, for me, are what it’s about, but in balance with my family; this job, getting off the road, testing my leadership skills and being a mum are all important.”