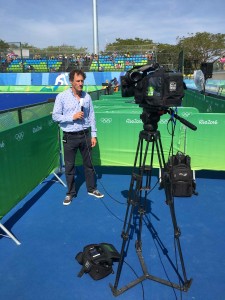 As the owner of a three-man freelance camera company whose main client is the Netherland’s RTL Nieuws, Peter Van der Struijs uses Dejero’s LIVE+ EnGo mobile transmitter to report live news from around the world. This year, he has already used it to cover the UEFA Euro 2016 football championships in France and most recently, the Olympic games in Rio.

The transmitter, which can be camera-mounted or wearable, delivers real-time HD pictures with low latency from any remote location. It also enables a single person to work alone and access locations that would have been difficult to access in the past with a crew and a satellite truck.

LIVE+ EnGo encodes video and transmits it over multiple bonded IP networks. Its modular design enables the attachment of swappable wireless modules, making it customisable to locally available wireless network infrastructures and for use around the world.

“Dejero’s LIVE+ EnGo helps one person take on the role of multiple people – camera operator, editor, sound engineer, technician, producer, and reporter,” explained van der Struijs. “I work in the business of fast news delivery and with Dejero I can be ready to report live from the International Criminal Tribunal in the Netherlands one day and then be in Brussels the next day to cover the aftermath of Britain’s EU Referendum.”

Broadcast from anywhere at any time

Van der Struijs’ team covers events from war zones to major sporting events or political engagements at a moment’s notice. He attributes the success of his live reporting to his team’s flexibility and ability to react quickly to news stories using the LIVE+ EnGo. The team handles around 30 news crew bookings a month, 8 to 10 of which require support from the LIVE+ EnGo.

“For example, having just arrived home from holidays in Greece I was able to immediately make my way to France to cover the clashes between England supporters and French police ahead of the UEFA Euro 2016 football match between England and Russia,” he explained.

“This truly illustrates portability of the LIVE+ EnGo mobile transmitter. We were running around trying to capture footage while avoiding pepper spray and tear gas. We needed to be travelling as lightly as possible and the reporter ended up carrying the LIVE+ EnGo around his neck. As a bonus that day, we also discovered that the EnGo rain pouch is beer resistant!”

“A key feature for me is just how easy it is to swap out the SIMs as I move from region to region or country to country. You can fill the Engo with 2x 6 sims; for example, one for local use and one for abroad, which worked extremely well for me in Rio last month. I love this unit and I recommend the LIVE+ EnGo to all camera operators covering news and indeed any live broadcast.