From the Players to lockdown: Sky Sports’ Katie Harrison on being on the golf front line as COVID-19 escalated 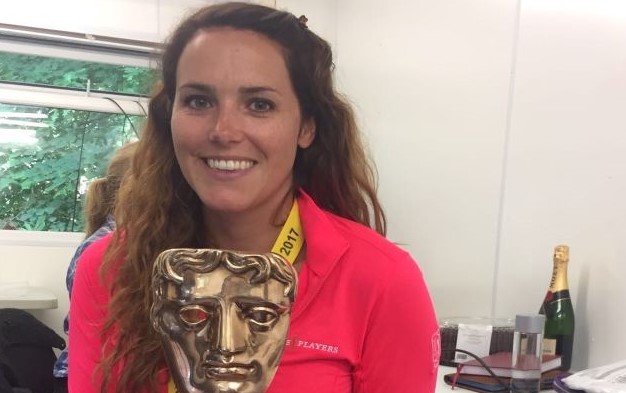 Katie Harrison, golf production manager at Sky Sports UK and Ireland, was at the Players Championship in Florida earlier this year when it was dramatically cancelled after one day due to COVID-19. Harrison had been billed to speak live at the SVG Europe Women virtual event on 6 May but could not due to personal reasons. However, here she gives us her written account of what happened in the US, and what her life is like now.

In March, I travelled to Florida for the Players Championship, one of the highest profile golf events of the season.

With COVID-19 spreading throughout the world quickly, we put some additional plans in place before leaving the UK and I contacted my PGA Tour colleagues and some of the crew that would be working with us. I asked them to stock up on cleaning products, disinfectant wipes and hand sanitisers. Cleaning is something we take seriously on our outside broadcasts, but we wanted to have more stock than usual to clean more vigorously than we normally would.

Once on site, in the US, we worked our way through the set-up days and started doing pre-records for the preview shows on Tuesday and Wednesday. As each day passed, the virus was more and more on our minds, as it was obvious that awareness of COVID-19 in the US was rising rapidly.

Everyone was making sure they cleaned their areas frequently, including the Sky Cart and Zone studio where players come to do interviews and demonstrations. Everyone was cautious and aware of their surroundings, how close people were getting to each other, what they were touching and how often they were cleaning their hands.

Driving to the course on the Thursday, the first day of the tournament, there was talk on the radio of events being cancelled and advice that large gatherings should be avoided. At midday, the PGA Tour made an announcement that days two to four of the tournament would be played behind closed doors with no spectators on site.

“Nothing like this had happened before. We were all trying to deal with it in the best way we could.”

Throughout the day, more sports events around the world were being cancelled, news alerts were going off on our phones and tablets, and people started talking about what would happen to the golf.

We left the course that day thinking Friday would be the same as Thursday, but with no fans on site.

However, at approximately 10pm on Thursday night, we heard that the PGA Tour were officially cancelling the tournament and no more golf would be played. A large group of us were together in the hotel bar talking about what was going on around the world. Hearing the news that the golf was cancelled, a group of us had a quick chat about our plans for the Friday morning. We would need to be on site early to broadcast the PGA Tour announcement live, to explain the situation to our viewers.

Whilst we sat in the corner of the bar, I had to contact crew to change the call time for Friday, liaise with the PGA Tour to let them know what our plans were, and to let my production coordinators know that we would need to amend flights the following morning.

I had help from some of the crew; they called the rooms of people who weren’t reading or replying to my messages, hoping that everyone would see or hear that we had to leave the hotel in a few hours.

Once I was happy that everyone had the new call time, we called it a night and set alarms for early the next morning.

Friday morning came around very quickly! It was still dark in Florida when we arrived on site at the golf course. Everyone made it on time and were in positions ready for a quick rehearsal before going live. Watching the broadcast, listening to what was being said, felt weird. Nothing like this had happened before. We were all trying to deal with it in the best way we could.

Once we were off air, I had a call with the production coordinators back in London who were four hours ahead of us. We ran through the list of crew who needed to get back to the UK, making a note of who would make the flight that night and who would have to be on the Saturday flight back to London. We had a total of 57 crew on site, with 30 from the UK.

“I found myself very aware of the situation I was in, how close people were standing to me.”

As the tournament had been cancelled, we would need to de-rig the kit, trucks, studio and Sky Cart set up. This would take time and with the airport a three hour drive away, it was likely a handful of us would not make the evening flight. Those who were finished once we were off air that morning managed to make the Friday night flight. This was a great effort especially as theme parks and other Florida holiday spots were also being closed. There were a lot of people trying to get back to the UK at short notice.

The 24 hours that followed the announcement that the golf had been cancelled felt surreal. Friday afternoon, when Sky’s operation was all packed up, the small crew of us still at the golf course stood there in disbelief, trying to get our heads around what was happening. Saying goodbye to our American colleagues was strange. Not knowing when we would see each other again or when we would be allowed back in the US was unsettling.

On the Saturday at Orlando airport I was surrounded by people trying to get home. I found myself very aware of the situation I was in, how close people were standing to me, what they were touching, and with some people in face masks and rubber gloves. The flight felt quick and I landed back in London on the Sunday morning. Gatwick was the quietest I had ever seen it.

It’s now been eight weeks since I returned from Florida. It took me a few days once I was back to realise that things were changing and people were adjusting to the new way of living. Working from home or on the road is something I’m used to, but this was a very different feeling.

To try and keep some normality, I started a weekly ‘ladies night’ video call. When we are on the road, we have one night a week where all the women get together for dinner to catch up properly. We decided that we should keep this up whilst we all find our way through lockdown. These weekly calls have been a brilliant way to stay in touch and keep smiles on our faces.

In the eight weeks I have been back from the US, seven PGA Tour events have either been cancelled or postponed and the Masters, the first major of the year, has been moved to November.

Who knows how long it will be before live sport returns to our screens? Until then, we will stay safe and appreciate this time at home with our loved ones.