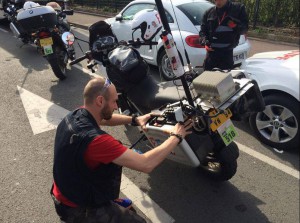 France Télévisions produces and broadcasts the Paris Marathon as well as the Paris-Roubaix cycling race. This year the two events, organised by the ASO Group, took place over the same time period in April. Euro Media, the service provider in charge of the coverage and broadcasting of both, had to juggle the contrasting requirements of these two demanding events.

Bruno Gallais, who is in charge of wireless production and international business development at Euro Media France, explains: “A total of 80 people were assigned to the two races (a staff of 40 for each). The first marathon runners were expected to arrive around 11.30am, whereas the Paris-Roubaix race began at 12.50pm. In both cases we were able to go live on France Télévisions.”

During the Marathon, two pressurised airplanes flew over the skies of Paris; one of these subsequently continued on to the Paris-Roubaix race, thereby covering both events on the same day.

“A portable camera equipped with HD Runner from Livetools Technology and a studio camera were placed at the starting line, with the [entirety] managed by the SNG XS2 van(F188) belonging to our subsidiary S-TV,” continues Gallais.

In the France 3 Alsace OB unit situated in Strasbourg, director Christophe Baudoin was able to use the footage recorded by the four motorcycles and a helicopter fitted with a Cineflex camera system, and delivered by the HFi4 unit stationed in Avenue Foch, Paris.

Meanwhile, for the Paris-Roubaix race the team required two relay aircraft, including a pressurised one and two helicopters equipped with Cineflex systems. 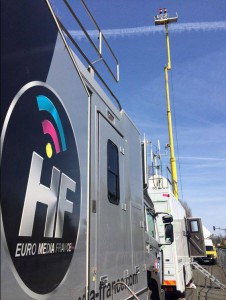 With the Paris Marathon and Paris-Roubaix cycling event, the second week of April 2015 was a very busy one for Euro Media Group

On the ground at the Roubaix Velodrome, the director Jean Maurice Ooghe (production director of the Tour de France) counted on four trail bikes to record the images and two for the sound recordings. Given the extremely difficult nature of the cobbled areas, these are the only motorbikes that can be used to film the peloton. In addition, for the first time on this event one of the organisation’s assist motorbikes (the one that supplies wheels to riders in case of a puncture) was fitted with a Toshiba mini-camera in order to provide a fully immersive live broadcasting experience.

“The images were very interesting because the bike’s engine was turned off so there was no shaking and the sound recording was of a high quality. It was therefore a totally immersive experience [involving] one of the aspects of the event that is rarely covered, i.e. wheel changes when there is a puncture,” says Gallais.

Euro Media’s HFR41 OB unit received all the RF signals and in turn retransmitted them to the France 3 Nord Pas de Calais OB unit located in Lille. OB units HFi5 and HFi6 situated high up in Mons en Pévèle and Meudon (close to Paris) made it possible to cover the entire race without any picture distortion due to opt-outs.