For some of the Ski Cup 2017-2018 Alpine skiing races, Italian TV production companies BetaMedia and DBW have joined forces engaging the innovative Esterna 14 OB truck. Esterna 14 is an FlexIP-Van that uses IP technology with 2022-7 signal routing. For the first time in Europe, a full IP system has been involved in the Alpine skiing television production 2018 edition. 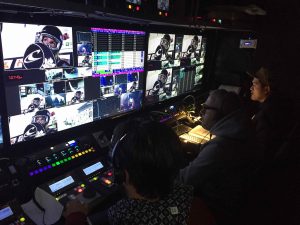 In particular, the Men’s Special Slalom in Madonna di Campiglio, the Classic Tre-Tre, the Men’s Down Hill in Bormio and the Classic Women’s downhill on the Olympic slope at the Tofane in Cortina D’Ampezzo were produced in IP.

FlexIPVan is the evolution of the original FlexiVan project patented in the USA for television production. The system was created to meet specific production needs, especially when it is necessary to face consecutive events of a very different production type, in different places and with tight set-up times.

The FlexiVan system, also repeated for almost 10 years on World Cup races, had its MOW modules connected to the Star Center on the OB-Van by means of CWDM optical multiplexing. Hundreds of signals of different types (audio, video, controls, intercom etc.) were transferred to the mobile gallery using a single cable with only two optical fibres which could be, for example, the cable used for the SMPTE 311-M broadcast cameras.

In Alpine skiing competitions the MOW cameras units are placed along the track and connected to the triax or fibre cables of each TV camera. From every MOW you can get signals to the gallery via the already-placed fixed fibre cables or with ‘Just in Time’ placed cables.

With the new FlexIPVan the concepts above do not change except for the fact that all the signals travel not in native coding but on an Ethernet protocol. The difference is that the signals are no longer sent to a ‘star centre’ and transferred from there by means of a large matrix. Each signal, in a full IP system, is routed from Ethernet to whatever destination it requests, without using a conventional matrix. 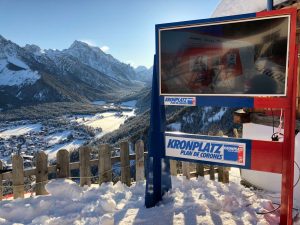 The FlexIP system does not provide a central matrix. The MOW cameras, MOW EVS and MOW InOut modules connect to the network and allow the basic system to be expanded without limits. For example, the MOW cameras allow up to six Ultra HD cameras to be connected to the OB-Van system.

But each MOW is instantly recognised by any OB-Van FlexIP. This means that with six modules, 2 FlexIP could work one day with 18 cameras each, and another day one could operate with 24 and the other with 12 cameras.

In some exceptional event, a single module can stand still and the other can work with 36 cameras. For a pair of Ultra-HD galleries this is a great added value.

In practice, the system is broken down at the end of production and is recomposed for each new event exactly as needed, thus transporting on site only the units (or MOW bricks) needed.

Rosario Messina, BetaMedia’s technical manager said: “The introduction of IP technology in the broadcast world confirmed how futuristic the realisation of the FlexiVan was. While waiting for the industry to make the same equipment the equivalent of elementary MOW, the FlexIP Van will be able to maximise the benefits of this new technology. Thanks to it, the Flexivan moves the investment of the matrix on the single modules. Thus the investment falls from the maximisation of the use of the MOW units. The network will also make it easier to connect the MOWs to the OB-Van in the coming years.”

Skiing World Championship is an ideal example of use of this technology: in fact in the just-run World Cup Alpine skiing it was necessary to cover shooting paths and slopes that are about 5km in the mountains. The problem has always been to de-locate and transport the necessary resources to useful points. In fact in the past broadcast cameras did not have a range greater than two kilometres so it was impossible to do the job without relying on intermediate support technologies — and the use of radio cameras in Europe was unthinkable.

Until 2000, when shooting in PAL SD, the only solution was to use sub-galleries at some points of the race. From there the sub-gallery provided a single sub-signal that was transported (at the time of PAL) with the radio links down to the valley and from here the main direction rebuilt the complete TV product.

From 2000 onwards until 2004, intermediate fibre-optic stations began to be used and huge resources were allocated exclusively to those productions in order to extend the range of cameras over 2 km. Once this production was finished, the mobile vehicle were returned to standard type.

In practice all the technologies used in these situations were put aside and reused only in the next edition. In other words, such an investment was put aside, unused and at every new re-employment it was necessary to re-wire everything and assign new resources.

Messina explains: “With the new configuration of the FlexiVan we were able to move the basic modules at any distance. For years we shot ski races and motorsports in racetracks where the range was higher than the single kilometre reachable with HD (from 2KM SD to 900 m HD), while others employed other transport systems such as Telecast and Riedel (extensions dedicated to lengthening the fateful kilometre). In our case the same modules can be placed in the gallery or at a great distance and the working method does not change. In fact, the fibre optic cable that connects the modules to the direction can be as long as necessary.

“This means that it is not necessary to make an ad hoc wiring or a revision of the whole operation with each new use. In practice, there is nothing to reconfigure. In any other configuration, such as the typical mobile van with fixed wiring, resources (even those not used) are immobilised and cannot be shared with other productions.

“With our system, investments can be shared with other galleries. In the new IP configuration we have moved a matrix portion in each module and since the router of a large medium is extremely expensive, splitting it into several modules is equivalent to being able to amortise it in shorter times than the typical standard wiring.

“For productions in general, a huge advantage is that we can send the empty OB vehicle, without modules, by ship at low cost, without immobilising the equipment for the entire duration of the trip.

“Then by virtue of the necessary configuration we can collect the modules that in the meantime have been used for other productions (generating income) and send them with small flight cases by air. In this way the immobilisation of equipment assets becomes minimal and very reduced, optimising resources to the maximum.”