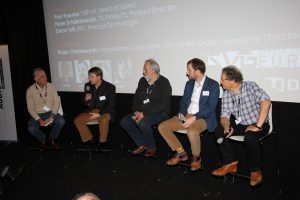 After a successful first edition last year, SVG Europe’s dedicated event for broadcast audio, the Next Generation Audio Summit will return for more insights and discussion on 9 November. Like its predecessor, the second audio summit is a collaboration with Dolby and will take place at the company’s Soho Square screening room.

Whilst the focus from the last event on immersive and object-based audio technologies will continue, this year’s summit will also examine the remaining challenges surrounding mass adoption of IP-based networking and the exciting possibilities for streamlined audio workflows resulting from remote production.

A mix of presentations and panel discussions will feature sessions entitled ‘Fully Immersed: A Year of Progress in NGA Technologies’; ‘Dolby and Sky on Making the Beautiful Game Sound Even Better’; ‘Remote Production Audio: Why, What and When?’; and ‘Bringing AoIP to Real-World Sports Broadcasts’. As ever with SVG Europe events, there will also be product demos and multiple networking opportunities, whilst at the end of the day attendees will have the chance to enjoy a special movie screening in Dolby Atmos.

The full programme and registration details can be found here (https://www.svgeurope.org/audio-summit-2017/). Space is very limited for this event, and registration is subject to approval. Speakers will be announced in the coming weeks.

SVG Europe Editor David Davies, who produced the programme in consultation with Dolby, says: “Last year’s Next Generation Audio Summit was very well-received and underlined the appetite that exists to discuss and dissect what is undoubtedly one of the most exciting periods in the entire history of broadcast audio. We are delighted to be working with Dolby again to reflect on another year of progress, and to consider what lies in store for 2018.”