The future of eSports and its role in the traditional sports-media landscape was the subject of a panel discussion at the 2019 Decision Makers Summit, produced in Miami earlier this month by SportBusiness and Sportel. The consensus was that eSports is here to stay and offers opportunities for traditional sports entities.

“Gaming is a part of our mainstream culture. It is a $150 billion industry and is bigger than Hollywood,” said Bobby Sharma, founding partner, Electronic Sports Group. “eSports is a $1 billion industry, and that speaks to the opportunity to reach an under-utilised audience that is enthusiastic, 18-34 years old, global, digital, highly educated, and relatively wealthy. It is a bit of a moving target as the industry evolves, but the opportunities are there.” 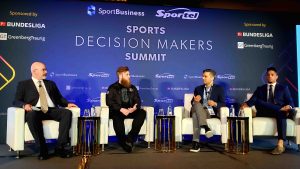 Thanks to the explosion of interest in eSports,  traditional leagues like the NBA and NFL are embracing eSports versions of their sports. On the one hand, the minutes that gamers spend playing a videogame version of a sport means that they are not engaged with the actual sport, but, on the other hand, the sport is offered an opportunity to open or expand a relationship.

“One of the things I love about NBA2K is, the NBA knows exactly what they are there for,” said Tyler Schrodt, founder/CEO, Electronic Gaming Federation, which brings eSports facilities and operations to high schools and universities. “They want to drive younger engagement with the NBA and create new fans. It’s really all about entertainment consumption.”

Lance Mudd, founding member/sport director, US eSports Federation, agreed that there is an opportunity to drive esports players to traditional sport and that it is also about entertainment. However, he opined, there is a need for more stability as a game like Fortnite captures the gaming community’s attention only to have its hype wiped away by Apex Legends before reclaiming the hype.

His non-profit organisation is the official governing body for esports in the US and is also a member of the International eSports Federation. A key goal is to nurture, inspire, and protect esports athletes and the culture by uniting the wide variety of stakeholders in the industry.

“For game publishers,” he explained, “eSports is a pure marketing effort as they want to increase longevity of the game and have a loyal community across many different titles. The question now is how to take eSports forward and help investors and also help teams gain legitimacy.”

Storytelling and helping non-players understand the games is key to that effort.

“You want people to be at a bar and interested in watching it,” Mudd added. “So you need to help the random person understand what is happening, and that means increasing the production value.”

Although there may be a perception that gamers are not active or interested in real sports, that is simply not the case. Schrodt cited a survey that found that 60% of gamers in high school were also wrestlers or played football and other sports. And Sharma said that 70% of gamers watch traditional sports.

“The relationships with eSports and leagues like the NBA did come to market in a disingenuous way,” Mudd said. “The NBA’s effort was pretty transparently about marketing and connecting to that 70% and even the other 30%. The goal is to make the NBA the league of choice.”

The trick is to not lump all games into one bucket. Each game has its own player population with its own cultural identifiers and commercial opportunities across those audiences. That makes it similar to traditional sports and also explains why it makes sense for traditional sports leagues to get involved, even if as a hedge against concerns about the aging fans of traditional sports.

The investments in eSports is not just about the big-time competitions that can dominate the gaming news cycle. There is a constant and steady beat of competitions on Twitch and also at high schools and college campuses. That amateur market is an important one, and Electronic Gaming Federation offers out-of-the-box esports solutions that can get a school programme up and running and also make it part of the National Intercollegiate eSports League.

“There is an opportunity to look at using the traditional-sports blueprint and make investments that are similar,” Schrodt said. “Our league structure is more like the MLS. But colleges are investing immense amounts of money in new facilities, and even high school state associations, districts, and local government are getting involved.”

The investments and interest are coming fast; last year saw a massive influx of investment capital. But money doesn’t get rid of bumps in the road, and there are still plenty of issues to be sorted out, such as increased oversight and governance, athlete safety, well-being, and managing growth responsibly.

Also, the audience demands authentic partners. So, as more money comes in, the dangers for those who are less than sincere increases, bringing their own challenges. “It’s a digital-first and a global audience that is growing,” said Sharma. “It’s also here to stay.”