FutureSport 2017: Looking ahead to European Championships 2018

A brand new sporting spectacle, the European Championships 2018, is set to bring together major athletics tournaments into one cohesive, audience-attracting show next summer. At SVG Europe’s recent Future Sport event, the people behind this major event spoke about their expectations.

This exciting new multi-sport event brings together seven of Europe’s top sports including the existing European Championships for Athletics, Aquatics, Cycling, Gymnastics, Rowing and Triathlon with a new Golf Team Championships. What is unique about this event is it is controlled by the individual sporting groups under one unifying brand. 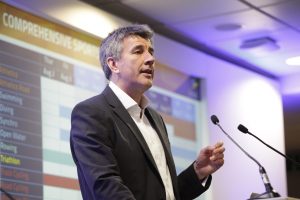 To be staged every four years starting in August 2018, the purpose of the European Championships is to become a new highlight on the global sporting calendar, elevating the status of European Champions during an 11-day celebration of world class sport and a packed 10-day broadcast schedule.

In 2018, Glasgow and Scotland along with the BBC will host Aquatics, Cycling, Golf, Gymnastics, Rowing and Triathlon, while Berlin and broadcasters ARD-ZDF will host Athletics. Underpinning the coverage is host broadcaster, Eurovision Media Services.

Paul Bristow, managing director at European Championships Management, commented: “This is bringing together 45 countries into two locations. The vision is to create a must-watch, must-attend event. A lot of European Championships are going unnoticed on the sporting calendar, so once every four years we will bring these sports together to create a multi sport event, the same as the Fifa World Cup.

“Simply, we’re going for all those events scheduled at different times, and coordinating them into one platform per territory. So the whole becomes greater than the individual parts.”

Ticket sales to watch these 4,500 athletes have already surpassed expectations; as of the Future Sport event in November, 40,000 tickets had been sold for Glasgow and 90,000 for Berlin, a total of 130,000, which is already more than was sold for the entire 2016 European Championships in Amsterdam.

Both the sporting federations and individual athletes involved will gain from the creation of the European Championships, said Bristow: “All will benefit from this aggregation; we can keep the attention of viewers all day.”

The TV viewing audience expected across Europe is projected to be 1.1 billion viewers.

Broadcasters are committed to the event also, Bristow commented: “When we presented this schedule 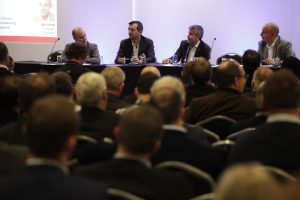 to the broadcasters, we asked for a commitment of three hours per day, and five hours at weekends, and they’re coming back to us now saying ‘we want to take the whole thing’ which is effectively about 10 hours a day from the start to the end. In the UK we’re going to be on the BBC, on BBC 2, from early morning to late evening next summer.”

The BBC will have a studio in George Square in Glasgow, which will be pedestrianised during the event, plus there will be a similar set up in Berlin.

A chart showing the cumulative audiences for selected sports was shown to federations illustrating that although other athletics championships have exactly the same runners going around the track as the Olympics, the Olympics gets vastly higher TV audiences: the difference, stated Bristow, is simply the packaging.

“So we believe that by bringing these sports together under one unifying brand, at the same time and same place, we could elevate the audiences on the television screens,” said Bristow. “So the vision is to create a multisport event, once every four years, the same year as FIFA World Cup. And it is the existing championships combined that create this event. Quite simply we are going from all the events staged separately at different times, with a coordinated schedule for TV, many broadcasters partners but one platform per territory.”

Avid’s role for the European Championships 2018 will be crucial in bringing consistent branding though onscreen graphics. Jason Cowan, business development manager for sport and graphics at Avid, commented: “When people talk about post production, people often don’t know Avid also has a graphics portfolio. Within the UK we haven’t had a great graphics footprint, but in the last 12 months we have expanded that. Bring involved in this event will really put the spotlight on Avid’s graphics capability.”

Eurovision Media Services is providing content production, content distribution, services to the rights holders and many digital services as well. Frank Choquard, head of products and marketing at Eurovision Media Services, commented: “It’s quite a complex situation we have to face. One of the key challenges was how to connect these places to one another. By making sure through new technology and ongoing innovation through IP transformation of [our] business, we could basically offer an exchange of content, exchange platforms, to offer the broadcasters partners [the ability to use content from any of the venues] as easily as if they’d been at the IBC.”

For the BBC in Glasgow and ARD-ZDF in Berlin, Eurovision is extending its platform to full IP to create an exchange content platform. This means broadcasters can work over the Eurovision network as easily as if they had been at the IBC. “So we now really have a full-IP-based network… to really allow the broadcaster to be able to work they way they want.”