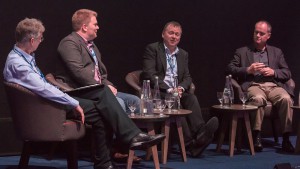 The extent to which mobile and OTT outlets are creating new opportunities for broadcast media providers, and the long-term outlook for UHD were among the headline themes at Futuresource Consulting’s New Content Horizons: Maintaining the Now and Harnessing the Next summit, held at London’s Ham Yard Hotel on 2 June.

The opening keynote from George Barrios, chief strategy officer & CFO at WWE, set the scene nicely. Over the past few years, the arrival of new online and mobile services, as well as the expectation of ever-greater interactivity have heralded significant changes for WWE’s broadcast content creation. With some 159 million WWE fan homes, the potential opportunities are there for all to see. Launched in February 2014, online subscription service W Network has been in the vanguard of WWE’s response, and with 1.3 million now subscribed, availability in 177 countries, and 90% subscriber satisfaction, it is clear that the organisation is on a winning path.

Moving on to outline the development of additional content, including Jerry Springer’s Too Hot for TV compilation of more outré WWE moments, Barrios nonetheless admitted that any such transition is never taken without its fair share of trepidation and invoked the words of much-missed New York Times writer David Carr, who passed away in February 2015.

“For any legacy business under threat of disruption,” wrote Carr, “the challenge is to get from one room – the one with the tried and true profitable approach – to another, where consumers are headed and innovators are setting up shop. To get there, you have to enter a long, dark hallway, a scary place.”

In this new OTT and mobile-oriented age, Farneti drew attention to the opportunities for sports content producers with “massive amounts of archive material”. Several panellists highlighted the extent to which sports drive technological innovation across broadcast per se, whilst there was also discussion of how to address the growing problem of illegal streaming of sports content. “We are working hard with the sports rights’ holders to deal with and combat piracy,” said Gibbs – although it is clear there is no short-term fix to this problem.

With double-digit-million 4K set sales in 2014, it is now surely a question of when – not if – UHD becomes the next paradigm shift for TV viewers. Nonetheless, the precise pathway for 4K adoption remains unclear. No specific 4K services have been announced to date, while as Johns noted the early 4K-ready TVs likely won’t support higher frame rates or HDR.

Gauntlett was perhaps the most enthusiastic about the imminent future for 4K. “We might not have [dedicated] 4K channels yet, but it will happen and higher frame rates will happen,” he said. 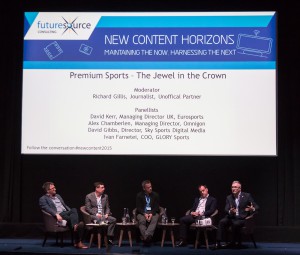 There was general agreement among the panellists that OTT services will probably furnish the first significant commercial outing for 4K. As for 8K, that was not expected to have any great impact in the short- to medium-term future, although Gauntlett observed that in the longer run resolution could be informed by the type of content in play – “some things you might want to do in 4K and some in 8K, depending on the material.”

Other sessions during the day included: a panel-based examination of OTT and its implications for the conventional broadcast landscape; a presentation on the role of dynamic metadata in powering the latest entertainment discovery experiences from Rovi product marketing – senior director Charles Dawes; examinations of the technological challenges confronting film studios and the changing relationship between hardware and content from Futuresource Consulting’s David Sidebottom and Simon Bryant, respectively; a look at the opportunities of ‘TV on the go’ in the 4G era by EE senior director of network strategy Matt Stagg; and insight into the transformative possibilities of virtual reality from Dolby senior staff architect Kurt Krauss and Sony Computer Entertainment Europe studio director Dave Ranyard.