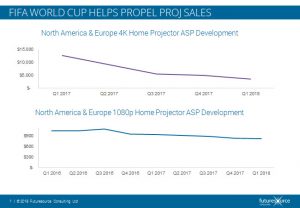 Although the first match day is just over a week away, the impact of promotional sell-in activity surrounding the World Cup is already being felt in the projector market, according to a report frm Futuresource Consulting. Feedback from both sides of the Atlantic suggest that projector brands are ‘making hay while the sun shines’ with regard to the World Cup, heavily publicising recent price drops of the 4K and 1080p solutions.

According to the latest Worldwide Projector Market Report from Futuresource Consulting, the average selling price (ASP) of a native 4K dedicated home projector dropped by 71% in North America, and 70% in Europe, year-on-year in Q1 2018, with combined sales consequently rising 808%.

“Whilst this substantial price plunge is largely due to the launch of models using the newly released 0.47″ DLP 4K chip, it is also due to channel players offering highly competitive sell-in deals ahead of the anticipated rise in demand around the World Cup,” commented Clare Kerrison, senior market analyst, Futuresource Consulting.

However, this trend does not only refer to home 4K solutions; it also pertains to the 1080p, which according to Futuresource, saw ASPs fall 17% in the US, 6% in Europe and combined sales rise 11% year-on-year in Q1. “A majority of the promotional activity in the projector market has been within e-tail channels. This has grown to become a core pillar of the industry’s sales in recent years,” added Kerrison.

Kerrison goes on to cite trends from the Futuresource Daily Pricing service, which tracks the ‘in-basket’ cost of projector solutions on key websites. “Fierce World Cup rivalry has already begun in the projector market. The Futuresource Daily Tracking Service has unveiled intense price competition between the core brands in recent months – and not just between home solutions. 4K and 1080p B2B projectors have also enjoyed significant promo activity – with combined sales of the native 4K rising 64% in North America and Europe year-on-year in Q1 2018.”