FutureSport 2015: OBS’ Sotiris Salamouris and BBC’s Jonny Bramley on getting ready for Rio 2016 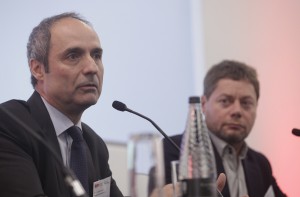 Whilst the forthcoming Olympic Channel might be providing one substantial ‘sideline’ for Olympic Broadcasting Services (OBS), the team’s ‘day job’ as Olympics host broadcaster is also keeping it very busy indeed as preparations for Rio 2016 enter the final stages. OBS CTO Sotiris Salamouris joined SVG Europe’s FutureSport on 2 December to discuss the offer that will be available to Rights Holding Broadcasters (RHBs), while BBC Sport executive producer Jonny Bramley was on hand to outline the British public broadcaster’s plans for the Games.

As Salamouris made clear, OBS’ preparations to bring the Olympics to “this beautiful city [and] lovely country” have involved a significant expansion of its service offering from London 2012. For a start, the number of live feeds to the IBC will increase from 94 to 104. “One reason is the inclusion of new sports like rugby and golf, but in addition to that we will have [the new introduction of] MCFs (multi-clip feeds),” he says. “We are talking here about additional live feeds coming from the venues with content that is mostly built around systems like high-speed cameras and [include] different angles and other linear content. It’s not ready for live transmission but is quite valuable for broadcasters to use in their own productions.”

Rio 2016 will also witness the continued evolution of the Olympic News Channel (ONC), which has been in existence since Beijing 2008. “This has increased and improved quite significantly during the Games [since then],” says Salamouris. “It is a full additional production that the OBS is offering with content collected from the sports and around the sports. It is packaged as the equivalent of a 24/7 linear channel distributed to all RHBs who share space in the IBC, [and is also made available for] satellite distribution.”

Examples of content – which will total 350 hours on top of the 6,000 hours of live coverage – include event overviews and interviews with medal-winners. Whilst the ONC has traditionally been delivered 24/7 as “an ongoing playlist of clips that replace gradually throughout the day”, the Rio set-up will add availability of clips via video server.

Salamouris also documented the continued evolution of the Multichannel Distribution System (MDS), the central concept of which is to offer a transmission-ready product to broadcasters on a subscription basis. In 2016, the MDS offer will encompass 12 channels – six of them fully programmable and able to be broadcast in their entirety all day, every day; the remaining six are distribution feeds “offering more opportunities and possibilities for broadcasters, including multi-clip feeds and news conferences.”

There will also be further enhancements to the Olympic Video Player, which was launched in time for Sochi and then “seriously enhanced” for the Youth Olympic Games of 2014. “All live video sessions [will be accessible] through the OVP platform. English commentary will be provided again as part of the signal, while broadcasters can also include their own commentary if they wish. [For Rio] we are also including additional statistics selectable by users.”

Meanwhile, in terms of site readiness, the IBC is “being built now as we speak and we are happy to see good progress; in fact, we are actually ahead of time in terms of internal construction.” One of the key features here will be an increase in the number of live distribution feeds from 40 HD feeds to 45 to reflect the increase in the quantity of content. As well as offering baseband HD/SDI, OBS will also be taking steps to support broadcasters using IP.

“There is a huge array of services offered by the OBS, [so the question is] what on earth does an RHB do with all of them?” observed Bramley as he took the stage to document the BBC’s preparations for Rio 2016. 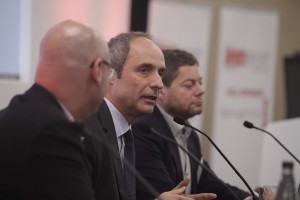 Once again, the broadcaster plans very extensive coverage spanning primary channels BBC1 and BBC2, as well as BBC4, national and local radio, local TV, world and domestic news services, children’s services, and social media. Operations will be split between MediaCityUK in Salford and Rio itself, where the BBC will be based out of the IBC. Here it will house its presenting and administrative teams, as well as engineering, radio news and graphics operations (the last-named provided by deltatre).

Bramley and team will seek “to enhance and tailor the OBS output”, including a Steadicam that will “roam around venues to tap into the atmosphere, as we did in Sochi.” The BBC will also broadcast from Copacabana, where “it has been working with OBS, Sotiris and his team, who have provided a studio complex that [will allow us to do studio-based] presentation and roaming presentation as well.”

In general, the BBC will be taking OBS raw coverage as it is, but for events such as athletics “we will be supplementing with our ISO cameras, OB trucks and replays to tailor the coverage to the UK audience. Also, as in London, we will be embedding some presentation into the venue to give a feeling of being at the event and to tap into the atmosphere. We will also be live wherever we think there might be a Team GB winner.”

London 2012 witnessed a remarkable level of innovation in terms of broadcast coverage, but the FutureSport presentations by the OBS and the BBC strongly suggest that there will be plenty of fresh delights to greet viewers of Rio 2016.