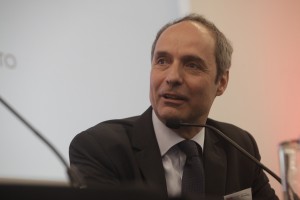 As befits an event that typically looks ahead to the broadcasting technologies and projects set to shape the forthcoming year, the first session at SVG Europe’s FutureSport (2 December) examined what is set to be one of 2016’s most eagerly-awaited launches – the IOC’s new Olympic Channel.

Overseeing the development and implementation of this new service ­– which is designed to both maintain the Olympic vibe between Games, and in particular encourage a greater involvement by younger people in the Olympics and in sports per se – is Olympic Broadcasting Services. Their CTO, Sotiris Salamouris, joined SVG editorial director Ken Kerschbaumer to discuss the current state of preparations and the major production processes involved.

With the need to prepare as well for the Rio 2016 Olympics, Salamouris readily conceded that work on the new channel had been “challenging… Of course we are trained to deal with deadlines, and that is a positive, but we are a few months from the Olympics now and [with the Olympic Channel] we have an additional ‘hobby’.”

It’s quite some hobby. In terms of channel-build, that “has started in Madrid; construction work is going on [to put in] the installation and infrastructure of support operations. The new facility will also house the OBS team after the Games. The channel will also use some technical facilities in Switzerland, which is of course the base of the IOC. We need to have the channel up and running in 2016, although the exact date has not been disclosed yet.”

In terms of design and configuration, flexibility is the name of the game. A “digital-mainly implementation” is the overarching objective, although the content creation platform “needs to be able to support more or less any type of distribution medium.” The result is an infrastructure that allows the separation of different elements so “you have a content creation set-up that is there to support the creative people and give them all the tools they need to implement their vision of the content, and allow them to support the creation of live content; but is also able to support content which is packaged to be played out as VOD or file-based content.”

In Madrid there will be capacity to manage both “live workflows and file-based workflows. There will be a studio available as well a large number of live galleries to support studio and live incoming feeds. This is part of the plan to be able to offer live content from different [areas of] the Olympic movement. The centre will also house technical rooms as well as commercial and administrative teams.”

The challenge of futureproofing

The current pace of technological change in broadcasting is such that designing a major new facility and choosing the most appropriate platforms is intrinsically “very difficult. You need to see where the future is going, but at the same time you need things now!”

Inevitably, “you have to compromise. We are certainly IP-based when it comes to file-based workflows. Indeed, from the OBS side we have been one of the forerunners. But in terms of complete IP-based working when it comes to linear workflows that is not yet fully possible; I think that is about another five or six years away.”

The OBS team are also making plans for 4K, with Salamouris confirming that with regard to “UHD we will have a certain capacity, although things are still complex in this area and I think we do have to wait and see [to some extent].”

Whilst Salamouris certainly does not underplay the work involved to date or still to be completed, he confirms that the project has yielded a huge amount of useful techical feedback, providing the OBS team “with new ideas and plans [that we] believe will also help us eventually with our standard host broadcasting operations.”