FutureSport 2017: Communication service providers examine outlook for 5G and sports on the move 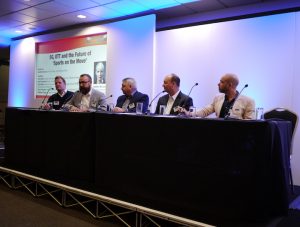 An illuminating panel session at FutureSport last month examined the emergence of 5G networks and the myriad of opportunities that they herald for delivering additional and enhanced content to sports fans – both on the move and in venues. The overriding message was that careful planning will be required if the potential of the 5G network – in particular their scope for creating immersive experiences – is to be fully realised.

The prospect of 5G network connectivity – which will offer data rates of 100 megabits per second for metropolitan areas, as well as significantly enhanced spectral efficiency in comparison to 4G – is one that has been exciting sports content creators for a while now. But as the session made clear, it’s one that nonetheless involves significant complexity in terms of distribution and bandwidth efficiency.

After a concise explanation of 5G offered by Steve Plunkett, Matthew Stagg provided some welcome 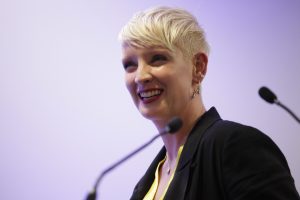 context in terms of the overall progression from 3G through 4G and now onto the latest network. “3G was built as a network that was a communications network, and if you were sat in the right place with a following wind you might be able to watch a bit of YouTube, probably with some stalling,” he said. “When 4G was built we started to look at how it was being used and [it proved to be a bit of a] perfect storm as screens were getting bigger and content was becoming less user-generated and more production [oriented]… and it was good quality!”

The result was that 4G was effectively, continued Stagg, “a video distribution network that one could also access video on” so for telcos such as EE “that was a whole new game” with new technologies and services being developed as a consequence.

Moving on to 5G, “we knew that we understood distribution very well and that we would be able to get great speeds and low latency [as well as] doing stuff with rich content around VR and HR. Some [of this] will be 4G and some will need 5G, but on the contribution side there are now user cases – which broadcasters are crying out for – about being able to nail up bandwidth and services for outside broadcasters to use the capability of network slicing so they don’t compete with consumer [services].”

If we focus on the outlook for sports and 5G specifically, noted Plunkett, then we “already see a great deal of complexity in the distribution model. Eyeballs are increasingly fragmented and it is not quite so easy to see where all of the audience is at one point in time.” With audiences increasingly dispersed it is necessary to guarantee that they can always be reached, not least for the purposes of generation. After all, nobody is in this for “the simple joy of distributing content over the Internet; someone wants to exchange money at the end of the day.”

Brian Morris puts 5G in the overall trajectory of what sports organisations and federations are seeking for their properties, which is to “recreate the environment and the immersion with end-users and consumers. And anything technologically that helps take and push this towards mobility will help the industry and those sports properties to recreate themselves.”

Citing a recent 360 environment trial in motorsport that involved numerous camera positions along the racetrack, Morris said that subsequent focus group comments highlighted viewers’ awareness of the quality of the broadcast as well as the fact that they “felt they were alongside the track” – in other words, at the epicentre of the action.

Kjetil Horneland remarked that in some ways the “whole industry had consisted of silos” for many years, but that now there was an overall emphasis on consumption and the creation of “truly inspiring experiences”. The greatest challenge, therefore, comes in “tying everything together” in terms of production and distribution, whilst also remembering that it is necessarily a moving target. “TV in the future is probably not going to be what it is today” and there is ongoing “fragmentation across the whole industry”, he noted.

In terms of realising the full potential of 5G, Stagg observed that it is important to “take a step back” and think carefully about how the spectrum can used most efficiently. “It’s all about delivering the requirement to consumers,” he said. Consistency of service whether on the move or in the home is essential, hence there should be an emphasis on “what can be done with the spectrum that’s common” to different methods of access.

The conversation closed with a consideration of whether 5G will assist with the overall long-term objective of enhancing fan engagement and reach. There was a general agreement that it would do so as long as the viewer perspective was always prioritised over any other consideration.

“What is a better service is definitely one that gives me what I want,” said Horneland. Whereas traditional TV “is a one-way street, the internet is a two-way street and that is part of the reason why we are all getting so far with social networks. If we can find ways to get more opportunities out of what we are distributing [content-wise] then it becomes very interesting to see how we can leverage that commercially and get a better service.” The viewer must always be “in the driving seat”, he added.