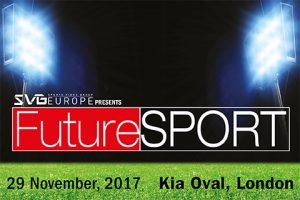 In the wake of its most registered event to date, Sport Production Summit 2017 – which took place at Amsterdam’s DeLaMar theatre on 14 September – SVG Europe has announced the full programme for its final major summit of the year. An iconic site of the cricketing world, The Kia Oval in London will play host to FutureSport 2017 on 29 November.

From the continued roll-out of 4K and IP-based production, to mounting industry excitement around HDR, 2017 has been another landmark year for sports broadcasting. But at FutureSport – as the name would suggest! – our focus will be firmly on the developments set to define 2018, including AI, 5G connectivity, and the new SMPTE 2110 group of standards for IP production. There will also be an exclusive preview of the major changes planned for the host broadcasting of the Wimbleon Championships, along with an in-depth exploration of the relative merits of HD HDR and UHD HDR production.

To round out the day, SVG Europe will make its first extended foray into the fast-moving world of eSports in a session that will ponder the origins, current status and probable future of electronic competition – and its implications for sports broadcasting of all kinds.

Featuring multiple networking opportunities – including a buffet-style lunch and post-summit drinks – as well as a technical tour of The Kia Oval, FutureSport 2017 will afford a welcome chance to take stock as another milestone year of sports production innovation looms into view.

“After one of our most well-received events yet in Amsterdam last month we are looking forward to returning to the Kia Oval for a summit that will provide insight and opinion on what is – by any standards – one of the most exciting periods of technological development in modern sports broadcasting history. Given this we expect demand for places to be high so early registration is advised,” says SVG Europe Editor David Davies.

To read the full programme, and for details of how to register, please visit the dedicated event site: https://www.svgeurope.org/future-sport-2017/.