FutureSPORT 2018: BBC Sport’s Barbara Slater on creating the sports platform for the next generation

In a wide-ranging interview, director of BBC Sport Barbara Slater discusses the importance of free to air broadcasting in the UK, explains why sharing resources and rights with other public service broadcasters could be crucial and outlines how OTT can help to bring a younger audience to televised sport.

A former international gymnast, competing for Great Britain at the Olympic Games in Montreal in 1976, Barbara Slater, director of BBC Sport, is responsible for approximately 20,000 hours of global sports coverage across radio, TV and online each year, including live sporting events, highlights, sports news and magazine programmes. She was awarded the OBE in 2014 for her services to sports broadcasting. 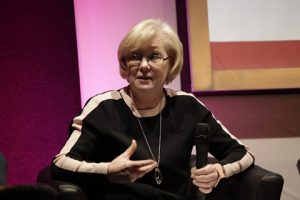 Slater started her career at the BBC in 1983 as a trainee assistant producer in the Natural History Unit in Bristol, yet has spent most of her career as a producer in BBC Sport, specialising in outside broadcasts and overseeing the production of a range of sports including tennis and golf. She took up her role as director of sport in April 2009.

In November Slater appeared on stage at SVG Europe’s FutureSport event in Manchester, speaking to contributing editor, Will Strauss, about free to air broadcasting within sports, sharing resources with other broadcasters, and bringing younger audiences to sports with the magic of over the top (OTT) technologies such as BBC iPlayer.

Strauss commented on the World Cup and European Championships, asking Slater what were her stand-out moments. She said: “Both of those events set out in the clearest possible terms through what they achieved the importance of linear television and the importance of free to air television. As a means of reaching a mass audience, those live sporting moments are incredibly important.” 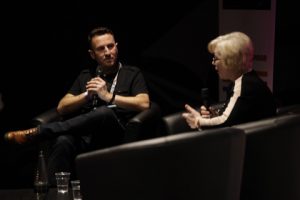 She continued: “It was the fact that [the World Cup] was free to air that created the interest. I think if the event had had a pay-wall, it would have been very different.”

Strauss asked Slater about the BBC’s creative approach to sport in 2018, and how its approach is changing going forward. “There is no question that sport consumption is incredibly different these days,” Slater noted. “And it is multi platform; people have many, many different touch points and what we are trying to do is recognise that and make sure what we produce suits those many touch points. What we are looking increasingly to do as we go forward is effectively commission content that is platform agnostic.

“What we’re looking to do is the same strength of ideas, it’s the same desire to be creative, and surround the actual sport on the field of play with brilliant build up, brilliant analysis, brilliant surround sound, but do that in a different way; make sure what we do, where we shine most brightly in a creative sense, is that all platforms are benefitting.”

Save pinnacle sporting moments for all

On the listed events regime for sporting events of national interest, Slater said it was still important to save pinnacle sporting moments and keep them in the free to air space through broadcasters such as the BBC, ITV and Channel 4. “BBC Sport is responsible for broadly 3% of the televised hours of sport in the UK, which is not a huge percentage and that’s because we’re multi genre and there are other broadcasters with several dedicated sports channels,” she explained. “Yet in a major event year we will be over 40% of the viewership.

“If you look collectively at the free to air broadcasters that percentage goes up to about 6% and the percentage of viewership goes up to 60% to 70% so I believe, not just the BBC, but free to air access to sport is crucial to the industry,” Slater said.

The BBC has an impressive rights book, noted Slater: “I think in the climate in which we operate, we have an incredibly strong portfolio of rights. It’s perfectly clear what our audiences want; they tell us this. They want us to cover the crown jewel events. I just think that’s what people expect from us and we’re going to fight as hard as we can to maintain that position.”

The BBC has recently acquired rights for cricket from the English Cricket Board. Slater said the governing body, which had moved gradually out of the mainstream, “over time had noticed a slight erosion in audience figures and the profile of their sport”. 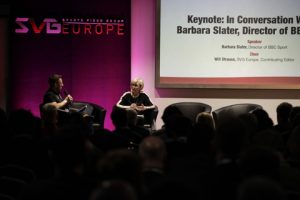 BBC Sport’s Barbara Slater said: “I think what’s been interesting has been the changing dynamics in the industry has led to an explosion in the volume of the breadth and depth of coverage of sport, but I think it needs to retain some balance.”

She said that when they came to renew their contracts, “they bundled rights, and there was a free to air bundle designed for a free to air market, where maybe the BBC, ITV, Channel 4, Channel 5 would compete for those rights, and then there was a paid bundle for the paid broadcasters. I think that best of both worlds approach is extremely sensible and I think we’re seeing governing bodies looking to do that.”

She added: “I think what’s been interesting has been the changing dynamics in the industry has led to an explosion in the volume of the breadth and depth of coverage of sport, but I think it needs to retain some balance. You could say it’s an extraordinary ecology that has driven huge success, but I think that’s on the basis of balance.”

Working out the differences
Rights sharing seems to be the way forward for public broadcasters in some scenarios, but not all, Slater opined. She cited the Six Nations Rugby rights, where the BBC knew there was very strong competition for the rights, and knew there was an expectation for there to be an uplift in the rights money, so the rights and how to deploy them was, “very carefully calculated”.

The BBC shared those rights with ITV. “When you have something like a European football [event] or Rugby World Cup, you have distinct matches and there’s a very knowledgeable audience out there who will find those matches,” Slater commented. “It was interesting the nervousness that maybe we had in our discussions with Six Nations as to would that division of rights make it a confused proposition for the audience, but actually I think the very reverse happened; overall reach increased. When you can have a position where your two national networks, ITV 1 and BBC 1, are both behind, trailing, talking about and promoting the Six Nations, the Six Nations benefitted.”

During the World Cup, the BBC and ITV shared resources. Slater said she believed that type of resource sharing will continue, as it worked very well. “It is something we felt very pleased with. It is a bit of a leap of faith, for both. Suddenly you’re taking on new responsibilities, maybe, for part of the chain for another broadcaster’s output, but I think the teams worked brilliantly together and we definitely took big strides, so I think the question is, how much further that goes.”

On taking sports broadcasting forward on the back of innovative technology, Slater referred to BBC iPlayer, which is evolving, constantly improving, and a valuable means of distributing sports content. “This is not an organisation that is standing still,” she stated. However, she added: “I think that innovation is going to be necessary to make the production [side of sports broadcast] more economic.

As to how the BBC is doing in fulfilling its promise of one thousand extra hours of live sport, made last year by BBC director general Tony Hall, Slater said it is well on its way: “I think we will exceed those numbers significantly. In 2012 we streamed all the different [Olympic] sports over 24 or 26 streams, and people loved that choice, that ability to follow at length whatever sport they wanted.” 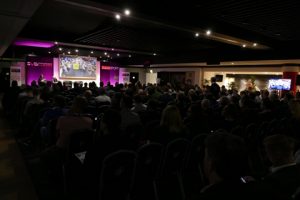 She added that while the technology behind the BBC’s Olympic coverage was something of a one-off at the time, it has now moved forwards: “We now have that ability and capacity to do that all the time and that’s a fantastic resource and facility. Our approach with the streaming is to work with governing bodies and third parties and make that platform available to them. So this is not a big rights investment; that’s not what this space is about. It’s not a big production for us. But if we have a governing body and they have a quality product – and often they are covering it now themselves – we can provide a platform…. where they can hopefully grow and enhance their audiences.”

She added: “We’re not looking for any of this content to be exclusive, and I think that is really important.” She went on: “Our platform is available to a multitude of governing bodies, and as long as their feed is compliant, as long as it’s of a national or international competition, we’re willing to listen and to talk about how we can facilitate getting that on the air.”

Additionally, Slater said the BBC aids governing bodies in the quality of their broadcast productions with advice and consultation. Slater commented that, “I think this is a great space of opportunity because often those governing bodies are not broadcast professionals. We had a partnership with a couple of sports and literally, the first time they do it, you’re sort of slightly wincing, but as they get more experience, the learning curve is huge.

“Some of these governing bodies are crying out for expertise and how they can produce content cost effectively and also to a quality level, and that is something we wouldn’t have the scale to do ourselves so what we’ve tried to do is offer advice.”

Attracting the next generation audience

As to how the BBC is looking at attracting next generation audiences, Slater admitted that, “there’s no question that figures and reach amongst that audience is reducing”. She went on: “It’s understanding where those audiences are. I don’t think this is just a challenge for the BBC; I think it’s a challenge across sport.”
Slater pointed to the rights process and the negotiation the BBC went through with the ECB; she said the premium they put on changing and evolving how cricket is covered with the new 100 tournament due to begin in 2019 is all about how to make the game appeal to the next generation.”

She concluded: “Sport is a gateway and it skews younger than many other genres.”