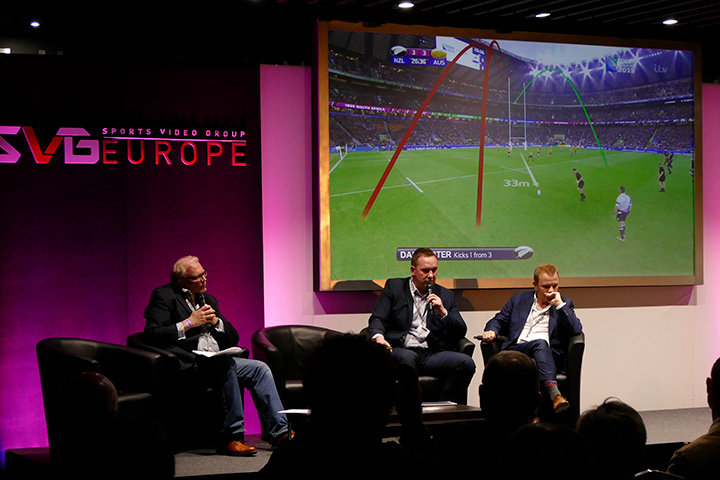 Preparations are well underway for the next Rugby World Cup, which takes place in Japan from 20 September to 2 November 2019 – the first time the event has taken place in Asia.

Two of those most closely involved in delivering the host broadcast and match graphics for the event spoke at SVG Europe’s Future Sport 2018 conference in Manchester last week, looking at the logistical and operational challenges faced by broadcasters and revealing their plans for the tournament.

This will be the first major event held in Japan since its co-hosting of the football world cup in 2002, with the Tokyo Olympics to follow in 2020. It is also the first Rugby World Cup to have an official host broadcaster: IGBS, a joint venture between IMG and HBS.

The Rugby World Cup requires a minimum of eight venues, but Japan wanted to spread the matches around the country so will have 12 venues, which will create logistical challenges.

“We have eight main OB units, supplied by NEP, and we have to get them to all these venues, which will take a while, as some are more remote than you’d imagine,” said Alan Bright, IMG Studios’ vice president and director of engineering.

One, Kamaishi Recovery Memorial Stadium, is in a town badly hit by the Great East Japan Earthquake, and replaces a school that was wiped out by the tsunami. It is only reachable via one narrow road or a single-track railway that still operates a steam train. Another interesting, but remote, venue is the Sapporo Dome, which was used in 2002, and has a grass pitch that is moved in and out of the stadium on a cushion of air.

IGBS will have about 650 people in Japan, divided between eight main technical teams and four 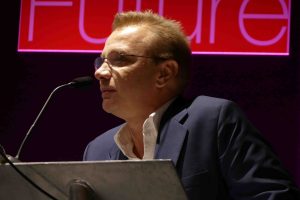 production teams, which have been carefully selected from major rugby-playing and broadcasting nations (New Zealand, Australia, South Africa, France and the UK). The production is being formed around four directors selected “as their coverage, we believe, has stood out in their various regions and also, we think it is great for the World Cup to mix the various flavours from regions around the world,” explained Bright. However, this presents them with an added challenge, as there are four different opinions about how the production should be laid out and about such details as where graphics are positioned.

Each game will have a minimum coverage of 23 cameras (of which eight will be Ultra HD), including four super-slow motion units and two ultra-motion systems, plus a ref cam. For 34 games, including the opening match there will also be two extra super-slo-mo cameras and a Spidercam (with either 10 or 14 UHD cameras). Each knock-out match will also have four corner flag cameras.

“There is lots of interest in the UHD coverage from broadcasters, but we’ve noticed it is price sensitive,” and the premium for UHD hasn’t disappeared yet, he said.

The productions will use flyaway packs – four are IP-based, the others SDI. Flyaways were chosen because there are a limited number of OB trucks in Japan, most of which are owned by rights-holding broadcasters, and its need for eight units capable of UHD and 32 cameras couldn’t be met locally.

All 48 matches will offer broadcasters eight multi-feed options for each match, all precisely timed so broadcasters can opt in at any point. The various feeds and formats will include UHD (SDR, 59.94, square division, with Dolby 5.1 audio) and HD (59.94 1080i and 1080p) match feeds, tactical feeds and a new additional content feed containing pre- and post-match content (such as team arrivals, dressing room cameras, press conferences) and in-match ISO camera clips. There will also be seven host broadcaster ENG crews providing material from the training camps of the various countries, including interviews, as well as roving cameras at the venues and fan zones, plus additional 360º virtual reality content.

IGBS is building a large international broadcast centre in temporary structures at the Tokyo Stadium that will house the technical centre, editorial and operational teams (including three commentators in English for each match), and quality control. The media server hosting all the world cup data will also be based at the IBC.

There will also be a dedicated “social media activation package” optimised for Twitter, Instagram and Facebook, with short-form and 360º videos, still images and easily-customisable infographics distributed via a simple, web-based “right click to publish” interface.

The Television Match Official for each game will be set up in a separate Portakabin in the OB compound at each venue, with access to all the camera feeds and the Hawk-Eye replay system, while the citing commissioners will be based at the IBC.

2019 will be Alston Elliot’s second Rugby World Cup having successfully delivered host broadcast graphics in 2015, when it was responsible for the Tournament Information System in partnership with Opta (which it will also be working with in Japan).

Alston Elliot does a huge amount of rugby for BT Sport, Sky Sports, BBC, ITV, RTE, and for both the Rugby Championship and Super Rugby in the southern hemisphere. “Although the Rugby World Cup is obviously a step up in terms of workflow […] we’ve got a lot of experienced people doing it and it is a proven and robust system,” said Stuart Coles, Alston Elliot’s chief commercial officer.

It is planning to match IGBS with four graphics production crews and eight technical crews, plus an IBC presence. It will have ten sets of kit, based around Vizrt systems, including the IBC and a disaster-recovery site. Having been in Tokyo when a typhoon hit, Coles added that the probability of having to use the disaster-recovery site was “quite high.” He expects to have at least 42 staff in Japan, plus project and client managers.

Its workflow will include delivering: world feed graphics in 1080p and augmented reality graphics, first level logging to augment the Opta data collection, the official match timing system and infotainment graphics for the big screens in each stadium. A remote production at the IBC will add automatically generated UHD feeds, a backup world feed, multi-language feeds (Japanese and French, possibly more) and multi-language augmented reality graphics.

With Spidercam playing an important part in the matchday production, Alston Elliot is also “looking at that to get some AR content in to the coverage as well. We’ve done a lot of work with Spidercam over the last couple of years on getting data from the Spidercam unit using their vector system. We’ve done it primarily on cricket, although we have dabbled on other sports, and we think it is something that could be really effective on rugby,” he said.

AR has been used extensively on rugby, “but mainly as a presentation tool, and while that looks great, we just think you can get a lot more value out of it if you’re using it with live match data.” For example, Alston Elliot has been experimenting with how to show kick maps in AR, rather than the normal 2D maps. “Goalkicking is so important in these big games, and different kickers have different blackspots on the field they don’t like to kick from, and it would be quite nice to show that,” explained Coles.

Another idea is to show the sequence of where events happen around the pitch, as it could demonstrate how teams focus on not giving away penalties within kicking range but are more likely to risk a big play in the opposition half.

“We are just keen to get more AR content in, but there are challenges. One of the reasons it hasn’t been done during matches is because of time. You don’t get a huge number of opportunities where you are at games with Spidercam where you can test this stuff, but hopefully there are going to be some opportunities throughout the year that we have identified that we can practice some of the ideas we’ve got and see how they work in a live environment and hopefully they will be something that can really enhance the coverage in 2019,” he said.