“The benefits for remote production are clear,” he said of the production philosophy whereby part of the production team is working at a location that is not at the venue. “Cost savings of 20 to 40% thanks to greater asset utilisation with centralised equipment and people as well as reduced travel costs.”

The Winter Olympics, he said, are a perfect example of an event whereby production teams are 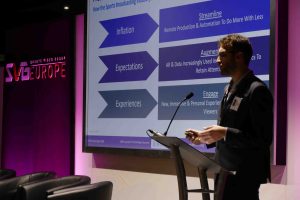 increasingly staying home (or at least part of them are) and the interest in more cost-effective production techniques is part and parcel of a world where sports rights continue to climb, said Zanni. One challenge is, as budgets are getting squeezed, consumers are expecting not only high-quality productions but also new features like Augmented Reality and interactive services.

“Another big topic in the industry is AI and machine learning and automation,” he said. The launch of OTT subscription services like ESPN+ are a great outlet for a large number of events that are produced only for delivery via the internet — but the downside is many of those events won’t draw large numbers of viewers. Automated camera operations and metadata targeting is part of the solution.

“[Those services] need a bit of automation to make them work,” he said. IBM’s automated highlight creation at the US Open in 2017 and 2018 is just one example of that philosophy in action.

With respect to UHD, Zanni said that while adoption is increasing it is still the exception rather than the norm from a production and delivery standpoint. “From our data broadcasters in Europe would rather combine HDR with HD rather than just have 4K,” he said.

One area that is cooling off is VR as adoption slowed down between 2017 and 2018. “Major companies have had to lower the prices of VR gear due to slow consumer adoption,” he said. “And the cost and complexity of VR production and post production is a big problem. Plus, there is a lack of certainty around business models and that is also preventing more from adopting it.”

But while VR cools off AR heats up, especially coupled with big data and professional graphics systems, plus open-source tools from gaming engines. “AR is not just limited to production as the NBA has launched an AR app to increase engagement with viewers, so people are exploring the technology further,” he added.

Zanni closed out with a discussion about eSports, the fast-growing market that is receiving more and more attention from traditional media outlets. The goal is to tap into big online audiences but there are some complex production challenges as they typically offer an opportunity to have multiple video feeds delivered out to fans.

“That may raise the cost of production in a traditional broadcast environment, so they want to deploy flexible and software-driven technologies,” he said. “Also, there is an increased demand for interaction during the broadcast.”

For all of the interest in OTT and interactivity, however, linear delivery remains key in sports. “Delivering video online and having a closer relationship with consumers is the long-term focus,” he said.