This was a record crowd for an SVG Europe UK event outside London — despite the best efforts of Network Rail, which recorded its worst day for punctuality in 15 years last Thursday. 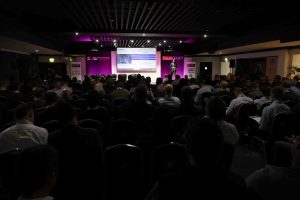 The rail network slowed down dramatically in anticipation of extreme weather borne by Storm Diana, with mass cancellations and delays to services on that day. However, as it turned out, the storm had largely blown itself out crossing Ireland the previous day and registered little but some stiff breezes across England on Thursday.

Most FutureSPORT attendees were attending by train: the SVG Europe team would like to thank each and every one who persevered on the day despite the rail chaos. SVG Europe would also like to thank all sponsors who made the event possible: AJA, Avid, Clear-Com, Cloudian, Dolby, EVS, Mobile Viewpoint, Panasonic and TVU Networks. 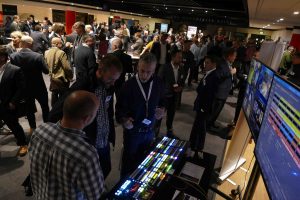 Networking opportunity during the coffee break at FutureSPORT 2018 in Manchester

as HDR, live IP and eSports, as well as panel sessions on the European Championships in Berlin and Glasgow last summer and the upcoming Rugby World Cup in Japan in 2019.

HDR and Live Sport: It’s Not Black and White

Keynote: In Conversation With… Barbara Slater, Director of BBC Sport