FutureSport 2017: The evolution of televised cricket coverage on Sky Sports 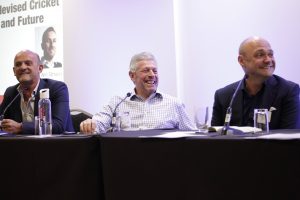 With an extended five-year broadcast deal secured with the ECB (England and Wales Cricket Board) that includes Test matches, One Day Internationals and every match from a new city-based T20 competition, Sky Sports also has a commitment to drive participation and increase interest in the game.

Moderator Will Strauss began by observing that with the possible exception of golf, cricket is probably the sport that has benefited most from production innovation over the past 20 years. He asked Bryan Henderson to first of all provide a picture, as the producer in charge of Sky Sports cricket, into how new technologies and production innovations are introduced to its on-screen coverage.

“The first thing is that a technology has to have a wow factor – or it’s got to tell a story,” said Henderson. “It has to tell the viewers something that they don’t know. We’re lucky in cricket because in the time it takes to play a cricket match you have a huge opportunity to tell that story.

“In between cricket deliveries you can have 20 to 30 seconds, seven or eight camera cuts, four replays — and if you all add that into every over, seven hours play in a day, 40 minutes for lunch, 20 minutes for tea – well you can see why I don’t have much hair left! It gives you the opportunity to tell that story. NFL has time, golf has time, also baseball – we’re kind of lucky in that regard. Not so for a football producer,” observed Henderson.

“Over the years we’ve kept some of the innovations, and discarded others for various reasons. The first thing that springs to mind is picture quality. It’s got to be amazing. When you look back at the old grainy footage in 1999 – you can see how far we’ve come. Hawk-Eye has done really well with ball tracking; we had the Sky Scope initially and then we decided to go with Hawk-Eye. They’re a fantastic company to work with, and have got better year on year; so much so that they’ve become part of the sport itself, in that umpires are [now] able to use that technology to give batsman Out or Not Out.

“The Sky Cart was a big innovation at the time,” said Henderson. “With [presenter] Ian Ward and the other people who use it, it’s taken pre- and post-match analysis to a new level, where players are able to look at themselves bowling or batting and they’re a bit more comfortable having a microphone stuck under their nose.

“And then more recently the Sky Pod: I was getting concerned that our 20:20 coverage was becoming a bit flat and samey, and so the thought was to broadcast from the boundary edge to get the commentators to bring more energy and so it would sound a bit different, creating more atmosphere – and to get better and easier access to players,” he said.

“It took a little bit of work to introduce it to cricket grounds, and that’s where relationships are really important. We’ve been doing this for a long time and you build up trust. If you stick an ice-cream van on the outfield, blocking some seats, it has an impact on revenues for venues. Some venues were easier than others. But I was very grateful to the ECB for their support, and eventually all the Counties came on board and we got there in the end.”

UHD and HDR: Everything in good time

A lot of innovations have seen early adoption on cricket, and one of the latest is Ultra HD TV which was introduced in time for Sky Sports’ coverage of this summer’s Test series between England and South Africa. Strauss asked Technical Manager Robin Broomfield what were the biggest challenges facing the team as they threw the switch to move to UHD cricket broadcasting. 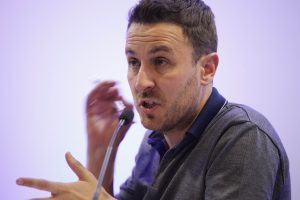 for Ultra HD. So we had a look at all the toys and had to work out what we could achieve and what level we would bottom out at.

“For example with RF links the latency is still too slow, so we do everything in RF at 1080p/50. That meant we could bottom out at 1080p/50, so we were already in the progressive world,” said Broomfield. “It doesn’t affect the quality when it gets up- and down-converted; the quality is still as good. The match cameras are UHD, so it’s only a small percentage of the overall coverage that is not.

“We did some testing two years ago, to see what it looked like in UHD. Preparation-wise, there isn’t a huge amount of time to prepare, to test, practice, rehearse because Bryan and his guys are out doing the day job for real. It was difficult. We did a lot of planning with CTV and Bryan’s team, sitting down to work how we were going to do it and what changes to workflow would be required,” said Broomfield.

“Because there was such a tight schedule with such a variance of set-ups, we had to be ready in UHD with two trucks, from the very first day of the season,” added CTV Technical Director Hamish Greig. “We had to do our tests in March and April, following discussions last year as to what needed to be in UHD and what had to be 1080p – and also what formats we had to supply. We also had to look at how to marry the UHD with 1080p, so there would be no change to our super slo mo cameras and the [Sony] 4300s. Our biggest challenge was making sure everything was ready – and switchable – immediately.

“From a technical point of view the shading on the UHD versus HD is quite different – aperture settings, camera settings, all that kind of stuff,” said Greig. “What’s the best way timing-wise, because audio delay is a major issue. We obviously used on-board Format Fusion from the mixer but we had external converters, we had 1080p recordings and playbacks, we had the iso feeds – so making sure everything selected was variable and married up audio-wise, and sounded good,” said Greig.

There was a lot of change involved in the move to UHD: was Head of Cricket Bryan Henderson nervous about this step into the unknown for the South Africa Test series, asked Strauss?

“Yes I was nervous. I’m thinking ‘God, please let this work’. But to be honest I’m incredibly lucky to be working as Head of Cricket at Sky: everything is handed to me on a plate by these guys, and various other colleagues in this room.

“You turn up as a producer or director and everything including Hawk-Eye and graphics and UHD is handed to you on a plate. In 12 years of covering cricket there have been hardly any instances of technical issues, and that’s testament to all the work that goes on behind the scenes by a huge team of capable and talented people,” said Henderson.

When will we see HDR as a regular offering on Sky Sports?

“We’ve done a lot of tests on cricket which is a great sport on which to test as it runs all day and you can sit there and make your tests,” said Robin Broomfield. “Of course HDR looks better: the dynamic range definitely looks better if you’re working in the 20:20 colour space. Whatever we do, we need to run one workflow for the truck – so my aim is always that the HD has to remain as good as, or better than, it is currently. With colour gamut we can’t quite get there; it does change things. So until we step into [HDR] we’ve got to know that our HD customers have got at least as good a product, technically, as they’re getting now,” he said.

“I think everyone wants HDR,” agreed Greig, “we see it as the future. But until we end up with a single stream that can deliver it, and has the archive capabilities etc, and does not have significant cost implications: everything is achievable engineering-wise, if you throw enough money at it. But you’ve still got to deliver a very good product at a reasonable price.”

Will Strauss then asked Henderson to comment on the rocketing cost of sports rights, and how that is impacting what we are seeing on the screen. As the cost of rights increases, how difficult is it to innovate with day-to-day coverage?

“Clearly the more money that’s spent on sports rights, the greater pressure there is elsewhere in the business. We are still very well resourced, that’s something we should point out.

“But there’s definitely a greater spotlight on production costs, and it’s my job to be more selective in what we do,” said Henderson. “Technology usually costs money. Innovation doesn’t always cost money. What you’re looking to do is view the array of options and decide what is value for money within your production budget.

“There are a lot of technologies around the world that we don’t use,” he pointed out. “There’s a Pitch Drone Cam that is used by Channel 9 in Australia and the ICC [International Cricket Council]; it looks great, but is it value for money? Not at the moment; you just have to make those calls.

“Sometimes the right thing to do is do nothing, by the way. If you’ve got fantastic UHD pictures and really good commentators, sometimes if you’re sitting at home you don’t want to be bombarded [by all these new toys],” said Henderson.

Looking ahead, what are some areas of innovation we are likely to see on Sky Sports cricket coverage? “There’s a new 20:20 competition launching in England in 2020. We’re working closely with the ECB to really rip it up and start again, to come up with something new. It absolutely has to go to a wider audience,” said Henderson.

“This is the vehicle that will hopefully safeguard the game and gets more women and more children involved. What does that look like from a television perspective? I honestly don’t know. It’s got to be more entertaining – but whether that’s Michael McIntyre on commentary or new camera angles or different graphics, I don’t know. It’s got to be more interactive – definitely. I also think sound is an untapped area of cricket – of sport in general, in fact.

“For next year we’re looking at expansion of UHD. And diversity is very much at the forefront of my mind when it comes to our talent and commentary line-ups. I don’t expect anything too radical for 2018, but definitely over the course of the next three years there will be some big changes,” said Henderson. 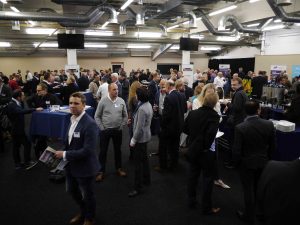 Finally, as BT Sport had begun its Australia v England Ashes coverage the week before SVG Europe’s FutureSport event, Will Strauss had to ask the ‘elephant in the room’ question: did the Sky Sports Head of Cricket sit down and watch BT Sport’s coverage and what did he think?

“I absolutely have watched BT Sport’s Ashes coverage,” he replied. “It was quite a strange experience, last Wednesday night, sitting with a glass of red wine on my sofa – almost sitting behind the sofa, panicking a little bit in case it was going to be amazing! Are they going to come up with something totally new?

“The first thing to say is that it’s actually an incredibly difficult thing to do, to go to Australia and do an add-on, to cut around Channel 9’s coverage: sometimes they don’t follow protocols that perhaps they should. And it’s hot.

“I don’t want to sound patronising,” said Henderson, “but I promise you that getting on air is quite an achievement. I remember four years ago being a very very nervous person, sitting with the mic on in the comm box in Brisbane on the first morning…

“I did watch their coverage,” he said. “I thought it was pretty good. I thought they made a very bold statement with Alison Mitchell as one of their lead commentators. I congratulate them on that. It has gone down well,” said Henderson.