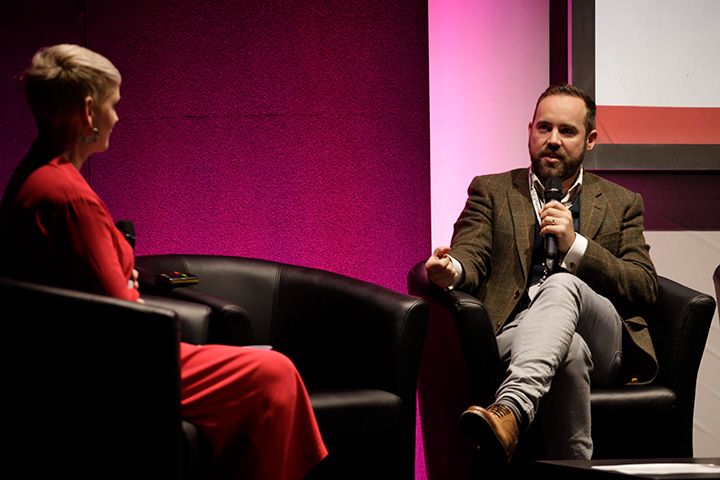 At SVG Europe’s FutureSPORT event in Manchester last week, ESL chief executive James Dean mapped out the DNA of an eSports production and outlined what broadcasters can potentially learn from video game coverage.

During the fireside chat with SVG Europe’s Heather McLean, he outlined the workflow needed for an eSports production, one that combines many of the traditional aspects of broadcast television world but incorporating crucial aspects of the digital gaming world.

“The workflow is split,” he explained. “We leave the vision mixing and a lot of the cable laying to the broadcast partners. What we do is the graphics and the all-important in-game observing: the virtual cameras within the game itself. This has a whole level of complexity to it.

“If we look at our production gallery, we’re 50-50 split between using hardware vision mixers and replay systems and PC-based software solutions.”

“With an eSports production for Player Unknown’s Battlegrounds or Fortnite, for example, you’re talking about 80 or 100 players. That is 80 or 100 virtual cameras within the game that we need to ingest.”

ESL works with various well-known broadcast services providers for the television side of its events, including NEP and Gearhouse Broadcast. But eSports has certain requirements that may appear alien to broadcasters.

“The mainstay of our content in a live environment is digital,” he continued. “It’s coming from a computer and there is a huge amount of data flowing and many opportunities to ingest graphics. With an eSports production for Player Unknown’s Battlegrounds or Fortnite, for example, you’re talking about 80 or 100 players. That is 80 or 100 virtual cameras within the game that we need to ingest. We then need to pair them up with actual physical cameras on the players and provide a storyline and a context to it. The sheer number of sources we’re dealing with [is vast].”

Dean says this isn’t something that can be done purely by the crew or production team.

“It’s impossible for humans so we absolutely have to rely on various types of automation, coding and scripting to take out the technical aspects of what we’re doing and inject creativity.”

That leaves the production team more time to be creative, he adds.

“Our production gallery is a row of creative people who want to make the button pressing down to a narrative or editorial decision only. You could argue that we’ve got a room of 10 producers not 10 technical people.”

Various vendors have supplied kit to ESL in recent times including Ross Video, Newtek and EVS.

“We utilise traditional broadcast systems for graphics,” revealed Dean. “There is no point in re-inventing the wheel when it comes to those workflows.”

ESL uses the Ross Video XPression CG and graphics system for its eSports coverage, combining it with Newtek’s NDI networking technology to allow lots of sources to be quickly and cheaply exported. 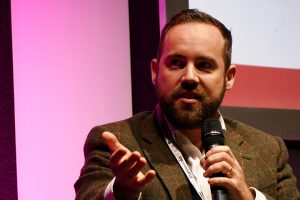 Dean is also enthused by the work EVS is doing with DYVI.

“It’s GPU driven and there is a scalability there for a huge number of sources,” he said. “The idea of mix effects [M/E] is kind of confusing to us. We need 1000 of them because we are constantly embedding various sources into all sorts of different environments.”

With so many different video games available on the market, Dean went on to accentuate the need to adopt and use technology and create ways of working that can cope with both big and small events.

“You have to remember,” he said, “that eSports consists of lots of different games. We might have a Dota 2 championship in the ESL One in Birmingham with 8000 seats full each day and 40 to 50 million people online viewing. But of course, we also have a game you’ve probably never heard of, like Old School Runescape, with 250,000 people watching and a budget of £40,000. It is still really important that we continue to develop any game whatsoever.”

He cites the example of the then-new release, Fortnite, in October 2017.

“We were looking at Fortnite and thinking ‘this is a chance.’ Six months later it’s the biggest game in the world. You cannot ignore any opportunity. Every single game offers the opportunity to create a brand new workflow in terms of the way we extract that game content or the in-game observing.

“Until Player Unknown’s Battlegrounds and Fortnite came along, you didn’t need these 100 sources. You cannot predict it.”

“Millennials are creating hundreds of thousands of communities themselves on all sorts of platforms. They don’t care where they are getting their content from. But they want what they want.”

Talking of things you could not have predicted a few years ago, ESL will soon be working with BT Sport on an eSports production.

In November, EE announced the launch of the EE Mobile Series, a Clash Royale tournament offering players the chance to join the eSports organisation Fnatic and become a professional eGamer.

The competition will culminate in an eight-player live final to take place at BT Sport’s studios in London on 20 January 2019. Coverage will be streamed live on Twitch.

“This originated because EE was looking to tip its toes into eSports,” explained Dean. “It had been doing some really interesting things with gaming personalities like the Wembley Cup [in which YouTube stars play in a charity football match]. EE then developed the idea of running a mobile tournament with Clash Royale. Obviously, EE has now been acquired by BT, so it made sense for us to consider what sort of resources could they offer. It’s a really nice way of them authentically saying ‘we make content’.”

Working with both BT Sport and Timeline Television, and having figured out the workflow “on the back of a napkin”, Dean is excited by the coming together of the TV and gaming worlds.

“It will be a really great example, and the first in Europe, where a traditional TV studio will adopt eSports in that way. BT Sport studio is perfect because of the dynamic aspects of the building itself with its huge number of LED arrays and rear projectors. I think it will mean a lot to the gaming community because they will appreciate that something traditional is touching their passion.”

“We were looking at Fortnite and thinking ‘this is a chance.’ Six months later it’s the biggest game in the world. You cannot ignore any opportunity.”

While eSports and broadcast are coming together for the EE Mobile Series, there are other connections too. Dean believes, for example, that TV can learn something from video gaming.

“There are a few things on the eSports side that be an example to broadcast. First of all, look at the habits of the audience. The majority are consuming this content on streaming platforms. They’re not necessarily interested in a linear proposition. I don’t think that is because linear is a bad form of distribution it’s because of the [lack] of interactivity it offers. There are some examples within some certain OTT platforms where there is a level of consumer choice and we see some really good examples where there are more options for better audio experience and higher frame rates. That is music to our ears. But the personalisation needs to be considered.”

Dean points to the opportunities to provide specific storylines that individuals are interested in.

“Kids today, millennials, they are creating hundreds of thousands of communities themselves on all sorts of platforms. They don’t care where they are getting their content from. But they want what they want. Offering a personalised service is important.”