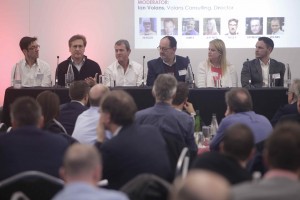 At FutureSport 2015 SVG Europe looked back at the huge success of the recent Rugby World Cup, in terms of both broadcast and digital output — in the company of CTV, ITV Sport, Opta Sports, SIS Live, Telegenic and World Rugby. 2015 was a record-breaking year for the Rugby World Cup, with 2.47 million tickets sold and another million people watching matches at Fan Zones; a record TV audience of 120 million for the final; 270 million video views on social media; 25 million unique visitors to the tournament website; 5 million uses of the RWC2015 hashtag; and 2.8 million downloads of the official app, which was used in 204 nations.

The success of England 2015 illustrates that there is so much more to staging major events in our modern world now that smartphones and internet connectivity have become an integral part of our day-to-day lives and where technologies are evolving so rapidly.

Ian Volans of Volans Consulting was in the chair. He told the audience he comes from the telecoms business, but in the last few years has been helping IBC, particularly with in the journey from the Mobile Zone to the IPTV Zone and from Connected World to what is now Content Everywhere. Volans first asked how ‘digital’ and ‘broadcast’ output sat side by side at Rugby World Cup 2015.

Dominic Kelly: “I suppose they are overlapping and complemtentary really. The main thing from our point of view, using digital, is to try and amplify and promote Rugby World Cup because that then helps to meet our wider objectives, which are that every four years we get a serious amount of income which we then spend investing in the game for the next four years. We try to provide, through our official digital and social platforms, content that is unique to us but also that complements what the rightsholding broadcasters are providing.

Neil Papworth: I think there’s a danger of separating digital and broadcast. I don’t want people to create an artificial divide between the two. It’s important to remember that good content is good on digital or on terrestrial.

Richard Crouch: I agree. The data we provide is the same data across broadcast and online digital media as well.

Ian Volans: What proportion of those 270 million views on social media derived from the broadcast feed, ie the live TV production?

Dominic Kelly: A fair proportion, but not all of it, because there is a slightly different audience digitally then sitting down to watch a match. We found that some of the best bits – like the Romania player who proposed to his fiancée on the pitch after the game against Ireland at Wembley – that was one of our most shared bits of video.

That’s the complimentary bit, around the match action. There’s other stuff people like to see. That one actually was actually captured on broadcast, but the other big example was New Zealand’s Sonny Boy Williams giving his winner’s medal away to a young boy in the crowd, which was captured by a spectator and shared in that way. Digital and traditional broadcast could well work closer to provide a more joined-up role.

Neil Papworth: My biggest disappointment, sitting on the back bench in the OB truck, was seeing so much material that never got to air. From my perspective I would love to see a closer relationship. That’s our challenge for the next four years, to find a way to make that viable. The technology exists: I think it’s more of a willingness to do it and a willingness to invest. Certainly, EVS has that kind of capability. You need more managers, more people to sort it out, than you do creatives.

Dominic Kelly: The big challenge is to get as many feeds as you can and get as many people as possible to look through that content, to be able to curate and use it in a better way. Another potential area we can look at is pre and post the broadcast window. Maybe there’s an argument for a more digital-led production, in the lead up to the broadcast and then after the broadcast — that can then be shared in clips or whatever. At the end of the day, that is effectively promoting the broadcast.

Terry James: I’m all for maximising the value of what people have in the truck. As far as what Neil just said about being rather disappointed about the amount of content that goes to air – well, there’s so many hours in the day when you can have a crew on site! If more thought was put in to how what was captured could be put out there … it just needs a bit more creative thinking I think.

Dominic Kelly: Just as an example, I happened to download the Spidercam feed from the final. I just watched about 25 minutes worth, but I thought it was brilliant. It gave me a completely different view of the match, and in some ways a much better tactical view than I got through traditional angles. Why not make those angles available to people to select? It’s just a case of working out how to get those feeds out…

For Rugby World Cup, although it wasn’t for external use yet, we had a way through Hawkeye of distributing I think up to 32 angles which were used on-site for player welfare (for TMO purposes), but also used off-site by Opta to help with the data logging. So we were actually getting those feeds off, we just weren’t making them publicly available. But I think it was a big step.

Neil Papworth: I agree: for me the highlight of Rugby World Cup, from a broadcast perspective, was Spidercam – I think it was fantastic. If we can afford to put it in more grounds, I think it gives a remarkable view. And the other thing is the output side: as I say, I sat on the back bench watching wonderful shots especially from the Railcam, pan/zoom shots on players, very little of which was actually used on output. I’d love to see that made more widely available.

Richard Crouch: I think we managed the integration of broadcast and digital fairly seamlessly, to be honest. Both were successful. The Rugby World Cup web site was a good example of how Opta data can be shown. A lot of web sites just do the normal stuff of the match stats and player stats. But actually World Rugby went a bit deeper and made sure that the extra content got across to the fans.

Similarly with Alston Elliot as well on broadcast graphics, we took their feeds and integrated those and that integration has developed over a number of years where we work week in and week out on various competitions. The integration was seamless from our perspective and from many others as well.

Neil Papworth: We’ve seen over the last few years a trend of various specialists taking over the creative side. We had specialists for the remote cams, for Steadicam, Spidercam, Railcam: that’s all on the input side. I think we’re now looking at needing specialists on the output side, to make that material available widely.

Ian Volans: Getting feeds out of the stadium, I understand that fibre was the primary connectivity used from all Rugby World Cup venues. We’ve seen that smartphones are placing heavy demands on connectivity within the stadium by spectators: are there implications for stadium owners, and are there synergies that stadium owners could exploit in ‘fibreing-up’ their stadiums to the outside world? 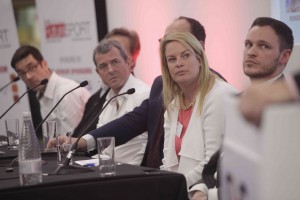 But looking at what we’re trying to do with them now, you don’t necessarily need the same number of feeds or the resilience of the fibre but you can use the bandwidth that’s sitting there to provide internet connectivity for anybody within the stadium. We’re speaking to the stadiums now to see what else we can utilise the bandwidth for in the future. We find that many different departments of stadiums don’t even know they have that ability. We’re talking to them to let them know what they’ve got, to allow them to sell their stadium further than just match day as a football ground.

Ian Volans: Will that connectivity be a competitive advantage for a stadium in the future?

Helen Jeffrey: Yes I think so. Stadium MK in Milton Keynes wasn’t chosen [for Rugby World Cup] because it had fibre; it was chosen because of its location. But that football stadium has also been able to do other things, such as dance events. So we know that for the broadcasters that’s an added advantage: while they may not have the choice of locations, it makes their lives a lot easier to know that the connectivity is there. They’re not just relying on satellite; they have alternative options.

Dominic Kelly: In order to deliver a service to fans – people with phones – you’ve got to have some serious investment. OK you’ve now got fibre at the door, but how do you distribute it around the stadium? I don’t know that any stadium yet that has cracked that return on investment.

Yes potentially a football club with a regular fan base coming week after week has a better chance than a stadium hosting six or seven international matches a year. It’s also dependent on the sport you’re hosting: with football or rugby it’s 90 minutes concentrated action, compared with something like NFL or cricket, sports like that, where you might have reason to interrupt their viewing experience with some useful stuff.

For Rugby World Cup, we used some location-based services to deliver relevant messaging to fans, based on things like which team they supported and where they were. But we didn’t really do that to the extent of where they were sitting in the stadium at a match, it was more about ‘if you’re on your way to the stadium or the Fan Zone, go and check this out’. The connectivity in the stadiums, with 80,000 people attending, just wasn’t there to deliver those sorts of services.”

In the wrap-up Q&A, Stream TV Networks Head of Production Duncan Humphreys commented, “I actually went to a couple of games as a punter, and had the privilege of watching England play appallingly! One thing I would say is the experience at the stadium was that it was very different to normal international rugby games. Is there a danger of going too far with that experience, of screens everywhere. Where is the cut-off point? Even in the broadcast, is there a danger of using too many toys?”

One of our jobs is to try to give them an experience that makes them think ‘that’s great, I want to come back for more’. Part of that is to give them the entertainment around the match. That’s the key reason, and I think we will continue to do that for Rugby World Cup as you’ll continue to have your rugby purists and ‘big eventers’ side by side.”