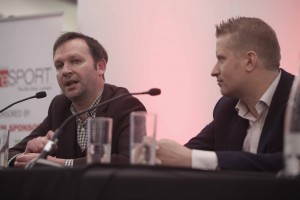 BT Sport’s UHD production efforts are paying off for the broadband and TV services provider as subscriber target goals have been met, productions are becoming more efficient and better every day, and, most importantly, viewers are noticing. “I can tell when we get new subscribers because there will be tweets about how amazing the pictures are,” said Jamie Hindhaugh, BT Sport, COO. “They are really positive and when we put the 4K TV on [in our headquarters] and replay an event people will stop and stare. We are getting the feedback we wanted.”

Hindhaugh and BT Sport Chief Engineer Andy Beale discussed the first year of the service, and the lessons learned, at the closing session at SVG Europe’s FutureSport event, held on 2 December at the Kia Oval in London.

“We have done 28 live glass-to-glass events so we are doing more than we set out to do and most weeks we are doing two events and we also now have an edit workflow to re-edit and re-broadcast events,” added Hindhaugh. “And then there are documentaries in 4K and a 4K-studio show. So the content is there.”

For many the jury is still out on whether or not a 4K service is a worthwhile effort, not only because of cost but because of a belief that consumers won’t see enough of a difference to justify purchasing a 4K TV set. But Hindhaugh said that consumers are buying 4K sets because they are looking to buy a new smart TV.

“When they see the 4K bit on the corner of the set they buy the 4K set and we are in a unique position to offer them 4K content,” he explained.

And with respect to costs, BT Sport is increasingly making strides towards a day when a single production can serve both 4K and HD viewers. “We are in a good place with [single-unit, dual productions] and will definitely build on it,” he added. “And we will forego some of the 4K production to move down to a single-truck production. And the beauty is you can replicate the HD camera plan and get pretty pictures [in 4K].”

In addition, said Beale, both 4K and HD graphics can be seamlessly delivered simultaneously through the ChyronHego graphics gear courtesy of templates that are deployed across both services and tap into different assets behind the template to ensure the proper graphic is delivered to the correct service. 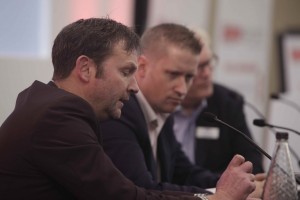 Hindhaugh and Beale (with moderator Fergal Ringrose in background) at FutureSport, December 2

BT currently is relying on two dedicated UHD production units from Timeline that feature a number of new technologies that make the units more powerful than their physical size suggests. For example, the use of a SAM Kahuna vision mixer features Format Fusion technology, removing the need for racks and racks of I/O conversion cards. In addition the Kahuna’s architecture divorces a lot of the processing from the mix effects, freeing up additional resources for the show.

Beale provided an update on some of the current key enabling technologies, pointing out that the Sony HDC-4300 has been “brilliant” and is crucial for operations because it looks and feels like an HD camera. Glue products from Axon, like the Toolkit card, have also played an important part as they allow for Dolby E audio signals to be embedded and de-embedded alongside the quad-split 4K signal with all signals remaining properly synchronised. BT also has used iMovix super-slow mo replay for Champions League and Premier League coverage.

“We are looking forward to specialist mini cameras and radio cameras are evolving quite quickly and offering improvements in latency so we can eventually switch over to 4K rather than using HD for wireless,” added Beale. “We have been working with Vislink on wireless 4K for MotoGP and it enhances the coverage because we can get into the garages and see the reaction of people there. So we are looking forward to unlocking the Steadicam positions at football matches [when the latency comes down more].”

BT Sport has also done some trials with high dynamic range (HDR). Hindhaugh said HDR is quite complex but that his real concern is that TV set manufacturers keep changing the acronyms for HDR that ultimately leads to consumer confusion. But that isn’t stopping BT Sport from continuing to move their service forward and refine the production workflow.

“The beauty where we are right now is we can try things in real life and see the impact and learn new ways of working,” he added.

Even more importantly, BT Sport is, increasingly, not alone in those efforts. UEFA Champions League 4K content is being shared with other International broadcasters and about six weeks ago BT Sport brought in a third-party 4K feed for a Europa League match.

“Interchanging content with partners has been a massive step forward,” said Beale.