FutureSPORT 2018: “SDI isn’t dead. But IP is there. They can live together for a while.” 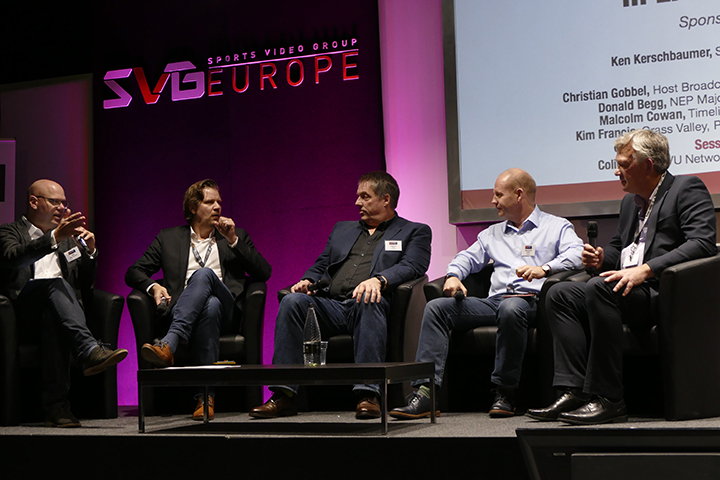 The sports broadcasting industry’s wholesale move to IP is not a fait accompli at the moment, despite what perceived wisdom might be suggesting.

That was one of the messages that rang out loud and clear during a panel discussion at SVG Europe’s FutureSPORT event in Manchester last month.

Speaking during ‘IP Challenge: Moving Beyond SDI in Live Production’, Christian Gobbel, head of venue engineering at Host Broadcast Services (HBS), pointed out that whether or not broadcasters and facilities should move to IP comes down to how the technology is to be used.

Gobbel also pointed out that the cost savings associated with IP are only possible in certain circumstances.

“If you have a single OB van, that does, for example, HDR and it has a contract, and does it every year, it is definitely cheaper to do it in SDI.”

While that message was clear, this is not an area of the business where things are black and white. There were just as many contrary opinions about IP.

“The amount of money you spend on the switch is bigger than the amount you spend on an SDI router.”
Christian Gobbel, head of venue engineering, HBS

The NEP Group, for one, is using IP-based systems to increase efficiency and flexibility and, in certain circumstances, because its customers are demanding it, revealed Donald Begg, NEP Major Projects, director of technology.

Increasingly, he said, IP is used for transport, particularly within remote production.

“The ability to start sharing resources is a big focus for us,” he said. “As a global company, I could tap into Australia’s ingest ports while they’re not working, for example. That is where the efficiencies are driving us to IP.”

Malcolm Cowan, Timeline Television’s head of technology pointed out that building a fully-IP OB truck, UHD2, was a huge learning curve for him and his company.

“It proved that it can be done,” he said. “IP brings a lot to the game. We can do a lot of things that are probably more difficult in an SDI world, especially when you’re talking about shifting large amounts of data. Ultimately, it is about what our clients want.

“If a client has a reason that they don’t want to do IP, that is absolutely fine.”

Cowan said that there are still “issues” with IP but the key is “enabling technology to provide things that you can do better, quicker and possibly cheaper for different sorts of problems.”

Speaking on behalf of the manufacturing sector as well as his own company, Grass Valley product marketing manager for networking, Kim Francis, acknowledged that one of the things that has changed because of the influence of IP is that ‘end-to-end’ workflows are no longer truly ‘end-to-end’, highlighting that Grass Valley no longer builds every part of a broadcast infrastructure.

He said: “For the central core switch in most IP systems, we look to leverage the developments in the IT world. £10bn was spent on IP fabrics vs tens of millions in the broadcast and media business. There is no doubt that Belden [owners of Grass Valley] has the resources to invest in these sort of things but when you look at the market, it just doesn’t stack up. We’re concentrating on the equipment around the switch and the edge devices.”

Not every COTS switch is suitable for a broadcast and media infrastructure, he added: “There is only about a dozen that do the job.”

“They’re very expensive too,” opined Gobbel. “The big vendors promised a lot and they are going back and forward so we end up at the moment with a system that has limitations. You buy it at a certain price to overcome those limitations.

The panel agreed that when it comes to IP, security is an issue that needs to be addressed, as is the need for additional IT support and skills.

“If you’re in an OB compound, or a fixed facility, there are a whole raft of things you need to think about,” said Begg.

“I think SDI isn’t dead. But IP is there. They can live together for a while.”