The march to all-IP live sports production continues. Last month, one of the industry’s leading production truck providers, Game Creek Video, added two IP-friendly trucks to its fleet. Bravo and Columbia are the company’s fourth and fifth units on the road today.

Each is a 53 ft expando that makes a significant achievement in fitting an entire remote IP facility into a single truck, eliminating the need for a secondary B unit for support onsite.

“There’s a move towards IP in the industry,” explained Jason Taubman, SVP, technology, Game Creek Video. “We want to make sure the trucks that we put on the road today stay relevant for as long as they possibly can.” 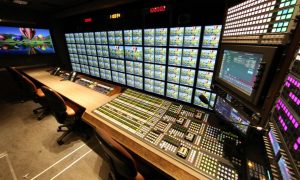 How is Game Creek able to fit all of the tech needed for an IP workflow in a single unit? Bravo and Columbia were each built to allow a full SMPTE 2110 infrastructure. Taubman and his engineering team needed to get beyond 576×576 in a router.

“There was all of this old infrastructure you needed, like Ethernet switches and gateways and multiviewers that really overran the available rack space,” he said. “We got to a point early in the design of Bravo [and Columbia] where we realised we could probably pull it off and make it IP.”

Perhaps most important is a new partnership with Lawo and Arista Networks. Game Creek worked with the duo for the first time to install an Arista 7508 enterprise switch as the truck’s core fabric switch. That pushes gateway, multiviewer, and in-network processing and orchestrating into the Lawo network powering the truck.

“One of the things that led us in that direction was the size and shape of it,” said Taubman.  “We were pressed to fit everything in a regular box, and one of the things that let us do that was the density that we got out of the Arista switch in particular. It [occupies] about a third of the rack space of our previous IP installations.”

Another driver in these trucks was accommodating the IP-compatible edge devices — switchers, cameras, replay devices, audio devices — that are starting to emerge in the market. Taubman notes that the switcher deployed, a Grass Valley K-Frame-X, is particularly exciting because Grass Valley will be expanding its capabilities to allow native 4K in a 192×96 switcher.

The audio side also has an IP hook. Atop the Calrec Artemis console is an AoIP box, which is a SMPTE 2110 or AES67 audio interface. It takes audio directly to and from the Arista network, a first for a Game Creek mobile unit.

Both trucks are working their first NFL seasons in the Sunday-afternoon broadcast window: Bravo with Fox, Columbia with CBS.

“Bravo is one in a family of IP trucks that break the mold in a lot of ways,” says Michael Davies, SVP, 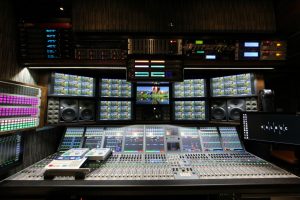 Bravo (pictured) and Columbia each have a Calrec Artemis console with an AoIP box attached. That box is a SMPTE 2110 or AES67 audio interface and takes audio directly to and from the internal IP network designed by Arista

technical and field operations, Fox Sports, the network for which Game Creek built its first truck in 2006. “The design will keep this truck and those like it relevant, adaptable, and cutting-edge for a very long time. We trust Jason Taubman, [VP, Engineering] Paul Bonar, and their exceptional team of OB designers to come up with the forward-thinking ideas while minding the pitfalls down the thorny path of mobile broadcast engineering.”

It should be noted that the trucks aren’t exclusively IP. Bravo hit the road first with a few test events this summer with its switcher in IP but a network of EVS replay servers and CCUs in SDI. Every position is built with both legacy SDI and IP (SMPTE 2110) capability, however, and is ready to make the switch to full IP when either Fox or CBS calls for it.