At a recent open day for tpc Switzerland’s new flagship UHD1 IP-based OB truck in Zürich, SVG Europe sat down with Imagine Communications’ playout & networking solutions president Steve Reynolds. We talked about the development of the new truck, SMPTE standardisation and the new possibilities created by moving into the all-IP world.

How did the HD1 IP-based OB truck project start?

In the summer of 2016, there was an RFP that was circulated for a 24 camera UHD IP truck. The discussions between Imagine and tpc were conducted around the time of IBC in 2016. The decision was made to kick off a development project using the Imagine Selenio Network Processor as the gateway for the truck. 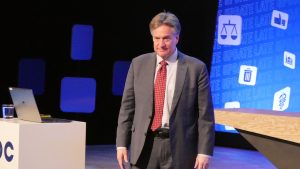 Using our new SNP technology, tpc decided to move down this path of building a truck that has an all-IP core. In the OB van there are a couple of large Arista switches. Those switches are the switching core of the truck. There is no crosspoint router, there is no SDI router; it is just IP in the core of this truck and this is really the decision that tpc made back in 2016 that they were going to build this truck around that core.

Did that require new SMPTE standards?

One of the key milestones that we had to accomplish to get this truck on the road was the ratification of the SMPTE 2110 standards. Those standards had been in development for several years prior to getting the truck project going. In September 2017, the first set of the SMPTE specifications was ratified. That served as a milestone to make sure the technology that we were building this truck around was known to be mature. We were moving towards a public standard.

What kind of input did Alliance for IP Media Solutions (AIMS) provide?

As a marketing alliance of companies that are building technology, we are looking for a framework and a common agreement about that set of standards to actually move things forward. Within the technical working group, we started out with SMPTE 2022 which was essentially SDI over IP. Then we extended the roadmap to include TR-O3, TR-O4 which were the technical references that did come out how to build with 2022 and ultimately what we define as 2110.

AIMS helped to move forward the ST 2110 process by working with the SMPTE, the Audio Engineering Society (AES), the Advanced Media Workflow Association (AMWA) and the Video Services Forum (VSF) to try to identify the places where there were gaps in the standard and then feed those back into the standards development organisations.

AIMS has helped to coordinate the interops and we have been doing this for almost three years. Coordinating the interops that get done before NAB and before IBC in order to qualify equipment. At those big trade show events, AIMS has co-hosted an interop zone so that customers can come and look at the status of interoperability between all of the different members for video, for audio, for metadata and for the newer specifications that are coming up like IS-O4 and IS-O5 which do registration and discovery. We also work on IS-O8 which is new audio channel mapping specification that is coming out from AMWA.

Why were IS-04 and IS-05 not implemented in the UHD1 IP-based OB truck?

The design for this van is about two years old. We started this process within the summer of 2016 when the RFP was issued. All the new projects we are starting today are built around IS-O4 and IS-O5 to use that as a standard space way for doing registration. All the devices that come on the network register with an IS-O4 register are doing discovery and device control through IS-O5.

Where do you still see some more evolution?

The Joint Task Force for Network Media (JT-NM) just recently published the new specification TR 1001, a technical recommendation which actually describes a complete technology stack of how to implement IP and virtualized production. This is ST-2110, the top of the pyramid.

But the timing and sync, discovery and connection, all the configuration of monitoring and eventually a full security layer needs to get implemented as well. These are the kind of things that the companies inside of AIMS are now looking at. How do we move beyond just a media transport layer and start to move to a full system?

These are things that really don’t have an equivalent in the SDI world. SDI was a physical connectivity specification. As we move more into IP, you are in a much more open environment.

First of all, it is an inherently networked environment, a packet-based network, which means we can addd functionality through software instead of having to redeploy hardware. But it also means we can start to adopt some of the software technics of other industries.

Security is a good example. There are a lot of security protocols and a lot of best practices around security that have been evolved for the banking industry and the healthcare industry.

What the broadcast industry needs to do is to take a look at those best practices and figure out how we want to leverage the rest of the world and bring some of this best practice into broadcast so that we can build more scalable, more secure and more agile software stacks.

Is the system ready for 8K?

There is no reason why the 8K production in Japan can’t do it with ST-2110. We just recently did our first project in 4K in Japan with QVC Japan. That is an IP-based system for 4K that can be expanded.