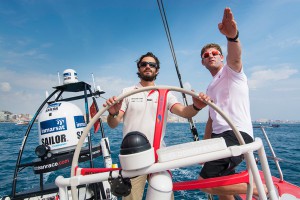 GB Labs storage has been selected by Host Broadcaster Sunset+Vine to produce HD content in the field for this year’s Volvo Ocean Race. The nine-month competition is one of the most extreme challenges on the planet, with teams enduring hurricane conditions while fighting through 40,000 nautical miles. The event started October 4 with an in-port race in Alicante, and the first ocean leg from Alicante to Cape Town sets sail October 11.

For the 2014-2015 race series, Sunset+Vine has invested in a portable shared storage from GB Labs. Space Mini replaces the production company’s existing rack-based systems yet still scores high in terms of capacity, security and speed. Supplied by British reseller Broadcast & Production Services (UK), the storage is lightweight and rugged, ideal to travel with the crew from location to location.

Space Mini is used in the field to safely archive the rushes and for online location editing. The system is equipped with standard Ethernet networking connectivity enabling multiple technicians and editors to access the content and work collaboratively on projects.

With seven competing teams, 39 half hour TV programmes and weekly video updates, the 8TB RAID storage now forms a key part of the operation in terms of file storage and location editing. Duncan Beattie, Global Product Manager with GB Labs, said:  “The Volvo Ocean Race makes for awe-inspiring television. The TV production crew needs a robust and fast storage system to create programming from locations around the world. Space Mini gives them the speed, reliability and versatility they need and we are delighted to be playing a role in this phenomenal competition.”

As well as delivering live coverage of the In-Port Race Series and Leg Starts, Sunset+Vine will distribute all race programming and news footage around the world. The production will be headed by the company’s specialist sailing unit Sunset+Vine|APP. For the 12th edition of the race, each of the new one-design Volvo Ocean 65 boats is equipped with the most sophisticated ever on-board filming, editing and satellite transmission equipment. At race headquarters in Alicante, a 24-hour watch system is in place to ensure a more complete picture of the ocean legs is painted than ever before.