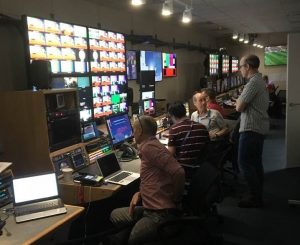 ITV on site in Russia for the current football tournament.

Gearhouse Broadcast has been commissioned by ITV to supply a range of facilities in Russia for its international football coverage this summer. The rights holder will broadcast live to the UK from its Gearhouse-built studio in Moscow’s Red Square and rely on the production infrastructure that Gearhouse has installed for it inside the International Broadcast Centre (IBC). This year’s is a similar set up to that which Gearhouse successfully delivered for ITV in Brazil in 2014.

Within the IBC, which is located at Moscow’s Crocus Expo International Exhibition Centre, Gearhouse has provided ITV with facilities including production offices, a master control room and a transmission gallery. This is then linked to ITV’s studio that’s been built within the city’s iconic Red Square. Work on the studio has been underway for a year, and a mock-up was built in London before everything was shipped to Russia to ensure there would be no delays once it arrived on site. There is also a full talkback capability between the studio and ITV’s production team at the IBC.

Roger Pearce, technical director, sport at ITV said: “For a job of this scale, you need a trusted partner not just with experience of delivering the technical set up, but also of transporting large quantities of professional broadcast equipment to somewhere like Moscow. Gearhouse did a great job for us four years ago in Brazil and have been very proactive in having a Plan B and C ready should we need it this time around.”

Ed Tischler, managing director at Gearhouse Broadcast UK added: “There’s been a lot of preparation with this job, as everything has to look just right once they go on air. From building a mock-up of the studio to populating and testing the various racks, this has been a team effort with us and ITV. Because of the location, and the challenges of getting people and kit in and out of the country, nothing could be left to chance.”

Gearhouse will have an expert crew on the ground in Moscow for the duration of the next month to provide on-site support throughout the event.