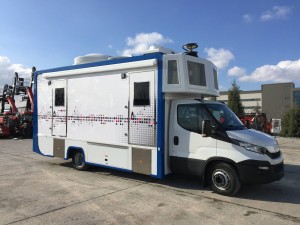 The Iveco 70C17 is fully 3G and HD compatible and runs six main Hitachi SK-HD1300E cameras with two optional Vislink RF cameras, and will be available to rent throughout the Middle East.

Gearhouse Broadcast Gulf, the Middle Eastern arm of Gearhouse Broadcast, has launched a new, privately owned multi-functional outside broadcast production vehicle with DSNG capabilities. The Iveco 70C17 is fully 3G and HD compatible and runs six main Hitachi SK-HD1300E cameras with two optional Vislink RF cameras, and will be available to rent throughout the Middle East. Built by Hitachi Kokusai Electric Turkey, the vehicle is being debuted on its stand at CABSAT 2016 (ZA1-30) between 8-10 March in Dubai.

Ideal for use both as a small, flexible production vehicle and in the field newsgathering, Gearhouse’s new van excels on productions where a larger OB truck would be impractical or cost prohibitive. The state of the art van comfortably seats a crew of seven and is available to rent across the region on a dry hire basis or complete with a crew of skilled and experienced operatives. The seven tonne Iveco truck is fitted with 62,000 BTU air conditioning – perfect for the Middle Eastern climate – and measures approximately 4m (H) x 8m (L) x 2.5m (W) with an expanded fully operational total width of 4.5m.

Flexible and featuring the latest technology from trusted industry vendors, the vehicle is well suited to provide facilities to local production teams or international crews shooting in the region. Its implemented workflow is suited to servicing a number of events including outside news broadcasts, political events, award ceremonies or sports.

The new production truck with DSNG capabilities runs six main Hitachi SK-HD1300E cameras with two optional Vislink 1700 RF cameras, and a wide choice of lenses are also available. It’s fitted with a 36 input switcher with 2ME’s, 48×48 video router and Imagine Communications glue that incudes frame sync, audio de-embedding and embedding facilities. A multiviewer and a Sony HDW-M2000P digital recorder and player are also installed in the vehicle and an EVS XT3 live production server can be added on request. The vehicle comes fitted with a Yamaha DM1000VCM 48 input 18 fader audio desk and a 32 port talkback system.

The vehicle’s satellite is a fully motorised, redundant 400w DSNG 1.5m 1+1 Ku band 2 port system. It features an encoder/modulator to support SD and HD MPEG-2, MPEG-4 and AVC codecs in 4:2:0 or 4:2:2 8 or 10bit sampling rates. To support the truck’s facilities an on-board 15KVA generator has been fitted.

“With the introduction of this new production vehicle and its DSNG capabilities, Gearhouse Broadcast Gulf has addressed the growing demand for access to a privately owned state of the art portable OB solution throughout the Middle East,” said Eamonn Dowdall, managing director of Gearhouse Broadcast Gulf. “The region has become a major media hub and is now a booming market so we’re delighted to be able to offer it access to the latest in production solutions.”