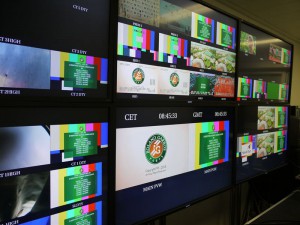 Its fifth time providing major services on the clay courts of Roland Garros, Gearhouse is currently providing Input Media with two outgoing cuts for the International Super Signal (ISS), the prime and extra feeds. This takes 70 camera feeds from the host broadcaster, France Télévisions, to create an overall coverage package from all of the tournament’s courts and distributes to multiple international broadcasters.

Japanese broadcaster WOWOW is also relying on Gearhouse to provide studio facilities and its own feed for dedicated coverage of the tournament.

“Getting the right facilities to provide services at this tournament is incredibly important because we deliver feeds to partners like Fox Sports Asia,” said John Williams at Input Media. “Our good relationship with Gearhouse is built on knowing their involvement will help us provide the best services possible.”

Kevin Moorhouse, COO at Gearhouse Broadcast, said: “It’s a huge feat to ingest and distribute 70 camera feeds from multiple locations and our partnership with Input Media over the past five years at the French Open shows the extend of Gearhouse’s expertise.”