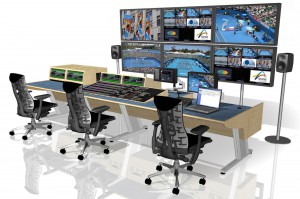 The 19 Jan to 1 Feb event will be televised live from multiple courts at the Melbourne Park venue in Victoria, including the Rod Laver, Hisense and Margaret Court arenas. Gearhouse Broadcast provided consultancy and project management throughout the contract and carried out the systems integration on site.

“This is a very large and prestigious contract,” comments Gearhouse Broadcast managing director Kevin Moorhouse. “The furniture aspect alone includes 26 Custom Consoles Module-R desks in a wide variety of configurations and two EditOne desks for the edit suites. Module-R provided a highly efficient basis for us to specify a furniture system which we could confidently assemble on site. It is robust, popular with operators, and attractively styled. Equally important, Module-R provides easy access to equipment and cabling during installation as well as for any required technical maintenance. The EditOne series is flat-packable which makes it very compact to deliver. Assembly and equipment integration are quite straightforward.”

“All 26 Module-R desks have hard-wearing grey Marmoleum work-surfaces and oak veneer. They incorporate desktop level 1U-wide rack-mounting equipment pods with up to 17U bays. Each of the production control desks is fitted with an integral video production mixer. The desks are variants of our normal Module-R range. They have the same high strength and rigidity as the standard Module-R series but are designed for easy transport and on-site assembly.”