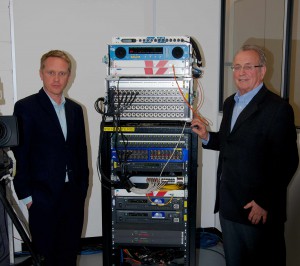 Gearhouse Broadcast has acquired the new Dyvi IT-based switcher from EVS for use on location. This will enable it to offer broadcasters lower cost, more efficient production where a single rack of equipment can replace a large OB truck at an event.

“Today, outside broadcasters, companies like Gearhouse Broadcast, fly their whole gear and crew, to a location,” but with Dyvi, only part of the equipment (and personnel) needs to be on location, reducing transport and accommodation costs, and freeing staff at home to work on more productions rather than spend their time travelling, explained Fernando Lopez Cisneros, Business Developer, EVS. “There is a business model there, and that is what everybody finds very attractive about it.” The exact savings, however, are project specific, depending on numbers of cameras, slo-mo recorders, shows, etc.

“The advantages are enormous, not just in terms of logistics, but consistency of production,” where a single production team can be involved in two or more matches in a day rather than one in two or three days, added Ed Tischler, Head of Projects, Gearhouse Broadcast. “Less engineering staff as well, and it doesn’t weigh anywhere near as much, so obvious logistics savings there; reduced rig time.”

“You can have two, three remote locations controlled by the same central processing unit,” said Lopez Cisneros. It can also be used with robotic cameras.

For golf, where a broadcaster might need two or three trucks to cover a course, “in this case you need one truck, and three small vans [with Dyvi racks]. You put in your own dark fibre, and that’s it,” he added. A similar model could also apply to a big tennis tournament. “It’s not only geographic distance, but also compound flexibility.”

Working in a practical environment

Gearhouse set up a demonstration system for broadcasters at its new HQ near London last week, which was the largest proof of concept Dyvi has been involved in, using a lot of third-party equipment. It involved a realistic multi-camera ‘remote studio’, linked via a 10km reel of fibre to the production room next door. The remote used a single, quickly set up rack of equipment, compared to the four to six racks (and several engineers) that would be needed on a conventional production. Once the rack is configured, it can be moved to another location without needing to set it up again. “So it becomes much more a plug-and-play type of facility,” explained Tischler.

Most of Gearhouse’s project work is outside of the UK, but often with UK-based clients, and this way of working fits in particularly well with its flyaway business. The purchase had partly been in response to clients asking Gearhouse about the possibilities of remote production.

“Lots of people were talking about it,” said Tischler, but “people didn’t realise how far developed the technology was. We wanted to create something where people could actually see it working in a practical environment, to show it was really possible.”

The communication between the remote location and main studio is key to how Dyvi works, allowing all camera control, remote pan and tilt, MADI audio streams, tally, talkback, etc., to go back and forth in real time. “The viewers don’t care whether the show is produced in London or in London and Manchester, but they have to look the same,” said Lopez Cisneros.

Although further features are already in the pipeline, the system used for the demo is ready for use on a production. “This really is a working system,” said Tischler.

The number of cameras (or other sources) you can have are limited to a maximum of 24 per processing unit, so if you need more than that on location, further servers have to be added, but the system is highly scalable, “and you wouldn’t necessarily have to expand the link,” added Tischler. “That’s a 10 Gig connection [carrying the whole OB], and you scale the servers.”

Right now, the processing unit can’t output on to a second, redundant link, but that is in development — and the unit will be able to monitor which is working and switch between them, so you don’t have to have a separate links truck.

At present, it can communicate directly with other equipment that use IP links, such as Sony, Hitachi or Panasonic cameras, Lawo, or Reidel. “We can also do serial to Ethernet if we wanted to,” said Tischler.

Gearhouse is involved in a remote production trial that doesn’t use Dyvi for one broadcaster, but the next big trial scheduled for Dyvi will be a trans-Atlantic test on events in September. It has previously been tested between LA and Las Vegas, and Amsterdam and Frankfurt.

“We have to do the tests, because as a new technology we don’t know all the uncertainties, the difficulties, that we will meet on the way. We are increasing the distance, step by step, to see how far this technology makes sense,” said Lopez Cisneros.

EVS (which became sole owner of Dyvi in January) has interested clients for the system in South America and Europe, but these are also unlikely to go ahead until the Autumn, or later, with definite projects lined up for 2016, mainly for sport.

“It lends itself very well to sport, because sport is a kind of travelling production,” said Tischler. “But there is no reason it couldn’t do a concert tour.”