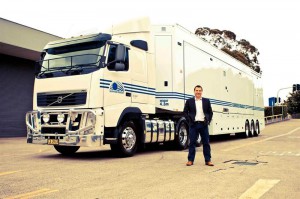 Broadcast services specialist Gearhouse Broadcast has completed the build of its new 4K native OB supertruck, which will be used by its Australian OB division. Known as HD8, the supertruck will handle all processes from acquisition to production.

Twelve of Hitachi’s new SK-UHD4000 Ultra HD cameras, of which Gearhouse purchased the first 50, are star attractions of the new OB truck. In addition to these cameras, the HD8 supertruck boasts a Sony MVS-7000X 4K mixer, Sony 4K monitoring and a 4K EVS replay system.

While being a native 4K truck, HD production is still a high priority, so HD8 is also capable of 2K, HD 1080i, HD 1080p and SD. Its HD specifications are similar to those found in the HD5, HD6 and HD7 trucks within Gearhouse’s growing Australian fleet. It features the same 64 fader MC56 Lawo 5.1 capable audio desk, Riedel Artist 192-port talkback system and NVISION NV8576 hybrid main vision router as the existing trucks and is capable of supporting 30 cameras (24 CCU and 6 POV) during an HD production.

HD8 is said to be ideal for large-scale entertainment and sports, and can facilitate a simulcast production outputting a 4K cut and a HD cut at the same time. Clients can also shoot in 4K and take the HD images from the CCU.

“The term ‘4K ready’ can be misleading. We don’t like to say our trucks are 4K ready, we like to say they’re 4K native,” said John Newton, chief operating officer, Gearhouse Broadcast. “HD8 is the best of its kind and shows massive commitment to our goal of being the leading OB facilities provider to the industry. This new truck follows Gearhouse’s philosophy of giving our clients the latest technology and the best options for their productions.”

HD8 4K supertruck is already booked for the forthcoming AFC Asian Cup international football tournament which will be held across five cities in Australia in January 2015.