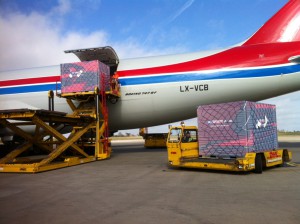 Late last week SVG Europe had the opportunity to preview the new, much-anticipated portable production solution from Gearhouse Broadcast at the company’s Watford, UK facility. An evolution of the flyaway pod that Gearhouse has supplied to Sky Sports for the past three Formula 1 seasons, the new OBPod will make its debut with its inaugural customer – Sky – on 15 March when the 2015 F1 season gets underway in Melbourne.

With global freight costs increasing substantially in recent years, the onus for the project was on delivering a solution that was lighter and easier to ship – and, once on site, quicker to rig and break down. Not surprisingly with so much complex and indispensable infrastructure involved in the design, it wasn’t exactly what one would call an overnight process.

“Reducing transportation costs has been central to our thinking in terms of the production infrastructure that we will take on the road for the next Formula 1 season,” confirms Sky director of operations Keith Lane. “Gearhouse Broadcast has taken everything within our current flyaway pod and refined it to deliver a lighter, yet more flexible and future-proof solution.”

SVG Europe’s OBPod guide, Gearhouse senior projects engineer Ryan Campbell, adds that it has “really taken this time to get to the point where we can fly the pods around the world with no problems, as well as to [be absolutely certain] about what radio mics, IEMs, fibre systems and so on to use.”

Integral to achieving this ultra lightweight design has been a collaboration with coachbuilder A Smith Great Bentley to deliver a standard air freight AMP rectangular container footprint but with lighter aluminium replacing the previous honeycomb casing. Vital pounds have also been shed by the eschewing of much traditional copper cabling in favour of an extensive fibre infrastructure based around a Grass Valley NVISION 8500 Hybrid router, which has HD and SDII/O on both copper and fibre. The router also handles all the embedding and de-embedding, reducing the amount of external glue required – and thereby further lessening the overall weight.

To be explicit about the full scope of the flyaway, OBPod comprises a total of five interconnecting pods: an EVS operational pod, an audio pod, an edit pot, a production gallery, and an MCR to house the broadcast infrastructure. Three of the pods incorporate expandable sides to increase the available space.

The post-production infrastructure integrated within OBPod includes four EVS XT3 ingest, playout and replay servers, as well as a migration of the edit system to Adobe Premier Pro CC, which is linked to a 500TB Dell SAS RAID storage system running on a 10Gb fibre network. There is also an on-site EVS IPDirector system integrated with Adobe Premier Pro CC  for ingest control, metadata management, on-the-fly editing and playout scheduling.

The communications matrix is based around a Riedel Artist 128 digital matrix, configured for up to 16 client cards and software. Other highlights of the extensive OBPod spec include an audio pod based around Genelec monitors and a Lawo console equipped with 80 faders.

Outlining the core ways in which OBPod differs from other flyaway solutions, Campbell pinpoints the emphasis on “having everything built into racks so the system is done… close the door, put the net over and onto an air-pallet, take the cover off, plug the power in, and be up-and-running within a day. With a normal flyaway you would be talking about a lot of dry-hire box equipment and a truck full of cable, as well as four or five engineers and a few riggers to get it all set-up and working.”

Of course, the definitive proof of the new approach will be in the first full-scale deployment of OBPod when the 2015 Formula One season commences in Australia next month. But Campbell is enthusiastic about what he sees as a “very strong, streamlined” concept and is full of praise for Sky’s hands-off approach during the development phase: “They have trusted us to get on with it and deliver the best result. It’s been a really fascinating project to work on.”