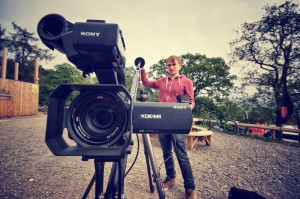 London-based content production firm geebeebee media – which is the sister company of post-production specialist FRAKTIV – has enjoyed a long-term association with major cycling events. Its latest engagement in the sport is with Pinkbike.com, which commissioned it to produce, shoot and edit a variety of content about the Shimano British Downhill Series – the UK’s national downhill mountain biking series that is supported by British Cycling.

During the process of devising the broadcast systems design for the last event of 2014 – held at Bike Park Wales near Merthyr Tydfil – an early call was put in to Sony Professional Europe, of whose cameras geebeebee media is a long-running user. “Being the exciting and dynamic sport that it is, we contacted Sony Professional Europe with a view to both showcasing the final event of the 2014 season and applying a range of their technologies to help us capture the action,” says FRAKTIV and geebeebee media founder and managing director Oli da Costa.

Generally speaking, geebeebee media assigns a team of two to three individuals to produce, shoot, photograph and report on such races, but for this particular event the company deployed a crew of six, including a cameraman fresh from the FIFA World Cup and Commonwealth Games and another producer who had been covering the Tour de France.

The use of Sony cameras for this series has its roots in a project that took place several years ago when the company shot a mountain biking event in the French Alps with a late-stage prototype NEX-FS700. Following the event, geebeebee media invested in its own FS700 and has found the camera to be an important asset as it continues to develop its sports production interests.

“When the opportunity to cover the 2014 end-of-season Shimano BDS race event came up, we discussed the shooting requirements with Sony and they offered us a range of other cameras to highlight various capabilities, from low-light and high frame-rate performance to 4K acquisition and in the case of their Action Cam products, image quality and niche POV application,” says da Costa.

Invited to consider what advantages the range of Sony cameras brought to the project, da Costa responds that it allowed us “to achieve a number of things that, although mostly possible on a single camera, would require extensive re-rigging, lens changes, multiple cameras/operators or other disruption. For instance, the Z100’s 4K capability allowed us to efficiently cover two scenarios; firstly, when used by a single operator, the camera could be left on a wider shot when conducting a dual interviewee piece, allowing the shot to be re-framed in the edit to give the impression of a two-camera setup (by extracting two HD regions) or even a polished slider shot, all without losing any resolution. The second benefit of 4K acquisition was in the more wide-open sections of the track, allowing us in post, to add zooms, cropping or image stabilisation to isolate riders, parts of the track or even camera shake when used hand-held.”

The Action Cams are among the specific items singled out for praise by da Costa. Fitted to a couple of pro riders’ helmets ahead of a course run, the Action Cams offer an enhanced quality mode when used with a compatible microSDXC card, permitting 50Mbps XAVC-S recording.

“Besides the improved image quality, the Action Cams offered a number of other benefits over other POV-type cameras, such as digital image stabilisation, GPS data recording and the ability to synchronise up to five cameras to one wireless wrist-worn ‘Live-View’ unit,” says da Costa. “The Live-View remote was particularly handy as it offered the riders simple one-button operation and recording control, synchronised recording on all the cameras – meaning multi-cam editing can be achieved with the minimum of hassle – and very low latency switchable camera previews for each camera connected. As we weren’t able to accompany the riders at all times, the facility (for them) to just have a big red ‘on’ button was a huge bonus.” 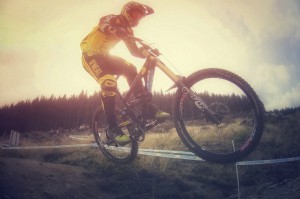 Since the Shimano BDS series events are not currently covered as live broadcasts, geebeebee media makes no use of any additional infrastructure aside from its Dell mobile workstations, memory card readers and media storage. Coverage is edited and delivered to Pinkbike.com within a few hours thanks to a post-production workflow based around the Adobe Creative Cloud platform.

“The set-up allows us to deliver written reports and photos, as well as two main video deliverables – these being a narrated helmet-cam preview of the track from a pair of pro riders, and a track-side course preview, incorporating team and athlete interviews,” says da Costa.

Apart from the involvement with Shimano BDS, geebeebee media’s interests are thriving across a variety of sporting disciplines. “We’ve recently worked with IMG Media, covering the Ba’ game held annually in Orkney and the launch of McLaren and Specialized’s co-developed S-Works Tarmac road bike, as well as with Canadian-based Boombox Group, assisting in the coverage of the world’s largest international mountain bike event series, Crankworx,” says da Costa.