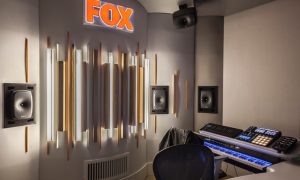 Fox Networks Group Italy has chosen Genelec technology for its multi-room post production facility in the heart of Rome, Italy.

Working closely with Genelec, the combined teams of Studio Sound Service and Proaudio Construction created a compatible and flexible electroacoustic system built around the latest Dolby standards pre-finalisation, able to cope with any deviations from the future official Dolby regulations.

Donato Masci and Cecilia Torracchi from Studio Sound Service designed the entire facility and gave their support to Proaudio Construction’s team until the final set up and Dolby Certification. The designed called extensively on Genelec’s ‘The Ones’ three-way coaxial studio monitors, with the flagship 8351 as the LCR solution, the more compact 8341 sibling covering the surround and height channels, and 7380 subwoofers handling the LF duties. The systems were then configured and calibrated using Genelec GLM software in all four control rooms.

“We were asked to provide Fox with Dolby Atmos Home Entertainment 9.1.4 mixing rooms two years prior to the release of Dolby’s approval protocol,” recalled Francesca Bianco, CEO at Proaudio Construction. “Located at Palazzo Marignoli, Rione I Trevi in the heart of Rome, Fox’s new facility had to be contained in an open-space working environment. At the very centre of the floor, in a 180m2 sound-proofed area, we had to fit four Atmos Home Entertainment 9.1.4 control rooms as well as two recording rooms and two post rooms – and we had just 16 weeks to deliver a working facility.”

Stated Donato Masci, acoustic designer and CEO at Studio Sound Service: “In my opinion Genelec studio monitors are the right choice most of the time, because they’re a real reference in the audio industry. When a monitor is designed for broadcast it is absolutely fundamental that the frequency response is linear, the directivity and distortion are controlled and it delivers a useful SPL across the whole spectrum. Then there is the management of the whole system, which is not so easy when you have 13 studio monitors plus the subwoofer contained in an area less than 20m2. Genelec systems are truly complete from these points of view.”

The installation itself presented a variety of challenges, not least due to the location of the facility. With access to the area heavily restricted, all construction materials needed to be delivered to the site at night before being lifted to the roof of the Palazzo Marignoli for storage. Meanwhile, technical challenges focused on soundproofing the space and ensuring the Dolby specifications were met.

Reflecting on the completed studio complex, Masci is clearly proud of the results: “The whole team of collaborators have worked at their best and the studios have been very successful. The design is appealing, and the environment is stimulating and creative. For me it was my first experience of a Dolby Atmos Home Entertainment room and when I saw and listened for the first time to some immersive audio tracks I was amazed by the dynamics and the sound immersion.

“The control rooms look very beautiful in photos, but when you go inside, you really have the feeling of being outside of space and time,” Masci continued. “This was the result we wanted to achieve with the interior design, lighting technology and acoustics – it had to be the basis for creating a 9.1.4 immersive audio system. Only by resetting the external environment, in all senses, will you be able to appreciate a system with so many sound sources; I think this result has been successfully achieved.”

“Everyone’s happy with the end results,” added Bianco. “The facility looks and sounds astonishing. It’s been successfully approved by Dolby, and Fox are rightfully proud of it. Most importantly though, the sound designers are happy and comfortable.”